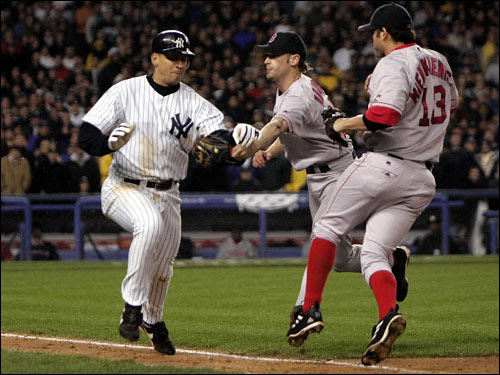 This Sunday, the NBA Playoffs will begin, and the New York Knicks and Boston Celtics, the only 1946 charter franchises of that league still playing in their original cities, will begin a Playoff series.

What are the New York Tri-State Area's 10 biggest postseason losses to New England?

Note that, for this, I'm including North Jersey and Long Island on my side. If I thought there was a Connecticut, or Providence, win over St. John's or Rutgers that was big enough to make this list, I'd include them.

What does not count, however, is regular-season games, no matter how late. So the 2004 Varitek/A-Rod fight, and the Jack Chesbro wild pitch 100 years earlier, are not included here.

10. October 23, 1884: World's Series. Yes, it was called that at the time. As you might guess, I'm currently reading Edward Achorn's book about that season, Fifty-Nine in '84. Granted, there's not a person alive today who remembers being at a game played by the original New York Metropolitans, champions of the American Association, or by the Providence Grays, winners of that year's National League Pennant. As a result of the distance of time, I'm putting this one (and the next one) early in the list.

But when the Grays came to meet the Mets (yes, that name was in use as well) in that year when Grover Cleveland beat James G. Blaine for the Presidency -- the Governor of New York over a New England State's Senator, I might add -- it was a very big deal.

But it turned out to be no contest, as Charles "Old Hoss" Radbourn and his team swept 3 straight from the titlists of "the beer and whisky league," who sent to the mound their own future member of the Hall of Fame, Tim Keefe, and had a 3rd baseman from Staten Island named Thomas John "Dude" Esterbrook.

The irony of my including this here is that the Grays' biggest rivals were, as you might guess, their nearest ones: The Boston team that would eventually become known as the Braves. After the Grays beat the Mets, it would be 28 years before another New York vs. New England postseason matchup happened in any sport.

9. October 7-12, 1916: World Series. The Brooklyn Dodgers (in those days, usually called the Robins after manager Wilbert Robinson) won the National League Pennant for the 1st time since 1900, and, for the 1st time since the World Series started in 1903, they were in it. But they had to face the Boston Red Sox, and it was no contest, with the men from Beantown winning in a humiliating 5 games.

The key game was Game 2, which went 14 innings, the longest by innings in Series history to this day. The Red Sox won, 2-1, in front of 47,373 fans, the largest crowd in baseball history to that point. The winning pitcher for Boston? Babe Ruth, going the distance on the mound, rather than at the plate.
The Dodgers would win another Pennant in 1920, but lose to the Cleveland Indians, and then not win another Pennant for 21 years, becoming known first as the Daffiness Boys, then as Dem Bums.

8. December 28, 1985: AFC Wild Card. The Jets and Patriots had been in the same Division since the founding of the AFL in 1960, but this was the 1st time New York and New England had faced each other in the NFL Playoffs. The Patriots won, 26-14, at the Meadowlands.

7. April 30-May 11, 1972: Stanley Cup Finals. The Rangers had Rod Gilbert, Jean Ratelle, Vic Hadfield, Brad Park and Eddie Giacomin. But the Bruins had Bobby Orr and Phil Esposito, and were just too much for the Rangers, beating them in 6 games.

It had now been 32 years since the Rangers last won the Cup, and while the word "curse" wasn't yet a major topic of conversation, people were beginning to wonder if it would ever happen again. Well, the Bruins haven't won the Cup since, and it's been 39 years. Are they cursed?

6. May 2-14, 1988: NHL Wales Conference Finals. The New Jersey Devils had made the Playoffs for the 1st time in their history (unless you count 1978, when they were still the Colorado Rockies), edging out the Rangers for the 4th and final berth from the old Patrick Division, then beating the Islanders (which was a huge thing at the time, even though they were in serious decline) and the Washington Capitals, before facing the heavily-favored Beantown Brats.

After losing Game 3 in Boston to fall behind 2 games to 1, Devils coach Jim Schoenfeld, once a tough-guy defenseman for the Buffalo Sabres, got into a shouting match with referee Don Koharski, who had supposedly made some unfair calls in the Bruins' favor. Koharski fell, and claimed that Schoenfeld pushed him. Schoenfeld was never one to back down, and said, "You fell, you fat pig! Have another doughnut!"

Schoenfeld was suspended for Game 4, but appealed, was able to sit behind the bench for a win, but the suspension was upheld, GM Lou Lamoriello had to take the bench for Game 5, and the Devils lost. The Devils won Game 6 at the Meadowlands, but lost Game 7 at the Gahden. The Bruins went on to get swept in the Finals by the Gretzky-Messier Edmonton Oilers.

In 1991, the Saturday Night Live sketch Wayne's World got turned into a feature-length film. Set in Aurora, Illinois, an industrial town west of Chicago, there's a parody of the Tim Horton's doughnut chain, named for Chicago Blackhawks great Stan Mikita. And the cop that Wayne and Garth meet outside the doughnut shop? His name is Officer Koharski. "No way!" Way.

4. March 21-April 2, 1939: Stanley Cup Semifinals. This was Eddie Shore's last stand, as he played just 1 more season before moving to nearby Springfield, Massachusetts and becoming a player-coach-GM-owner. The Bruins also still had Dit Clapper, but it was rookie Frankie Brimsek (known as Mr. Zero for a string of shutouts that season) and the German-Canadian "Kraut Line" of Milt Schmidt, Woody Dumart and Bobby Bauer, that set the pace for Boston.

The Rangers were still pretty strong, and Bryan Hextall Sr. (father of 2 NHLers and grandfather of Ron) would lead them to the next year's Cup, beating the Bruins in the Semis, but this time, it was not to be. It took 7 games, but the Bruins finished the Rangers off, and then beat the Toronto Maple Leafs to win the whole thing.

3. April 29-May 13, 1984: NBA Eastern Conference Semifinals. The Knicks and Celtics slugged it out -- not literally, this wasn't the 1990s Knicks and the Miami Heat, after all -- for 7 games. Ultimately, it wasn't Bernard King or the Boston Garden or "the Luck of the Leprechaun" that settled this, it was Larry Bird and company refusing to lose. Despite Nard averaging almost 30 points per game in this series (29.1), the Celtics won at home in Game 7.

2. October 8-16, 1912: World Series. There have only been 2 New York vs. Boston matchups in the World Series -- not counting the 1884 New York-Providence matchup, of course. The Braves only got into 2 before moving, one against Philadelphia (1914) and the other against Cleveland (1948). They never played the Yankees in a Series until 1957, and by then they were in Milwaukee.

But in 1912, the Red Sox and the Giants played each other. Game 2 was tied and called on account of darkness, so this one went not just 7 games, but 8. And Game 8, at Fenway Park (in its first season of operation), went 10 innings; talk about taking it to the limit. In the top of the 10th, the Giants scored to take a 7-6 lead. With Christy Mathewson on the mound in the bottom of the 10th, it should have been safe.

But center fielder Fred Snodgrass dropped an easy fly ball hit by Clyde Engle, who ended up on 2nd. Then he made a spectacular catch of a Harry Hooper drive on the next play; if he'd caught the easy one and handled the hard one on the first bounce, we'd have forgotten him a century later. Engle advanced to 3rd. Matty, normally a control master, walked Steve Yerkes.

Then came a popup by the great Sox center fielder Tris Speaker, and neither the Giant 1st baseman nor their catcher seemed willing to catch it, and it dropped. The catcher was a Cahuilla tribesman named John Meyers, naturally nicknamed "Chief." The 1st baseman? None other than the man whose baserunning blunder helped cost the Giants the 1908 Pennant, Fred Merkle. Given a second chance, Speaker got a hit to drive home Engle and tie the game, and Yerkes got to 3rd. Larry Gardner then hit a sacrifice fly to bring home the World Championship-winning run: Boston 8, New York 7.

It was the greatest World Series yet played; the only previous one to go 7 was in 1909. It would take 74 years for New York to beat Boston in a World Series. The Red Sox would also go on to face the Dodgers in 1916, but that was a wipeout, and not worth mentioning here aside from having the longest game by innings in Series history, 14 innings, in which Babe Ruth went the distance for the win -- on the mound, not at the plate. Ironically, that year, Fred Snodgrass was playing for Boston... but for the Braves, not the Red Sox.

I think you know which event is Number 1.

Never mind the walk to Kevin Millar, the stolen base by pinch-runner Dave Roberts, the walkoff homer in Game 4 and single in Game 5 by that lying cheating bastard David Ortiz. The key moment in this series was the Slap Play in Game 6. If Alex Rodriguez had simply not flailed at that tag by Bronson Arroyo, there would have been 2 out, with Derek Jeter at 2nd and the tying run at the plate in the form of the powerful Gary Sheffield (who, however, had not been hitting lately), with 86 years of failure still bearing down on The Scum. But no, A-Rod had to be a bitch about it and slap it, and interference was called and Jeter, through no fault of his own, was forced back to 1st.

After that, there was never any question that the Sox were going to win the Pennant. When they pulled away early in Game 7, it was agonizing, and we just had to sit there and take it, whether actually in The Stadium, or watching all those partying Scum fans on TV (as I was). Credit to all those Yankee Fans who endured all the way, and, uh, cursed be those who cut out early, unable to take it as much as they'd dished it out all those years. At least we could resign ourselves to it all but immediately (thanks for nothing, Kevin Brown-out), instead of suffering the calamity all at once.

And TESSIE IS A WHORE!
Posted by Uncle Mike at 8:47 PM