Sorry-ano Excuse for a Bullpen... But Boston Sucks 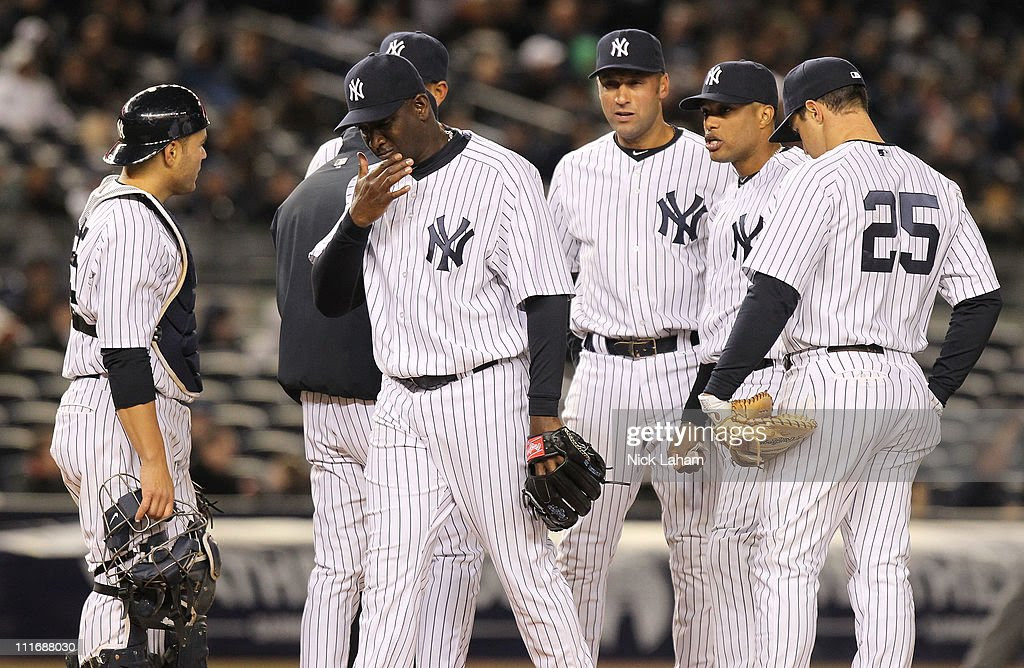 The Yankees are now 3-2. That's a .600 winning percentage. At that pace, they would win 97. That would probably be enough to win the AL Eastern Division.

The Yankees had a 4-0 lead over the Minnesota Twins last night, thanks to Mark Teixeira's 4th homer in 5 games and Andruw "I Can't Dance, I Can't Spell" Jones' 1st homer as a Yankee. That was after 2 innings, and even after 7. After a shaky Opening Day start, which ended up not mattering, CC Sabathia pitched pretty well -- and it ended up not mattering.

Rafael Soriano, the closer for the Tampa Bay Rays last season, came in to pitch the 8th, and he had nothing. He and David Robertson, so much responsible for blown games last September and October, allowed the Twins to tie it up. Joe Mauer's single off Boone Logan in the 10th won it for the Twins, 5-4.

The Boston Red Sox and the Rays lost again, rendering both of the last 3 seasons' other AL East contenders 0-4. The Baltimore Orioles, idle yesterday, are 4-0; the Toronto Blue Jays, who I figured would be dead last in the Division thanks to the O's renaissance that began last midseason when they hired Buck Showalter as manager, are 3-1.

So the Yankees are a game and a half out of 1st place, 2 in the AILC (the All-Important Loss Column). The Jays are 1 back, the Scum and Deviled Eggs each 4 back. Four games back on April 5 (now 6)? That's not good.

A check of The Boston Globe, the great barometer of New England baseball pessimism before the Red Sox starting cheating to win, shows columnist Tony Massarotti very concerned, a combination of newsprint and sweat on the page (screen?):

The maddening Daisuke Matsuzaka hasn’t even stepped on the mound yet, but already the Red Sox possess far greater concerns than their torturous No. 5 starter.

5. The pressure: A losing streak can make even the most animated team look lifeless and dispirited, but the Sox have been nothing short of what former manager Joe Morgan would describe as “dead-assed” during the first four games. Rather than embracing the expectations that come along with a $180 million payroll, the Sox seem burdened by it. That is not a good sign.

We said this before and we’ll say it again: the most important quality the Red Sox possessed in 2003-04 was the fact that they simply did not give a damn. They were not afraid to lose. Those Sox played as if they did not have a worry in the world, which is precisely what was required given the burden of team history. The worst that could happen was that the Sox would end up like every team before them. Right now, this club could use some of that attitude.

4. The bottom of the order: For all of the talk about the depth of the Red Sox batting order, the bottom third has been a sinkhole thus far. The Nos. 7, 8 and 9 hitters in the batting order are still 4 for 37 so far this year. That’s a .108 average.

For what it’s worth, New York Yankees manager Joe Girardi has done some shuffling at the bottom of his batting order already, too. Nonetheless, the Yankees opened the season with a bottom three of Jorge Posada, Curtis Granderson and Russell Martin. Compare that group to, say, J.D. Drew, Jarrod Saltalamacchia and Marco Scutaro. Which would you rather have?

3. John Lackey: With Saturday’s beating at Texas, Lackey is now 13-11 in April during his major league career with a 5.14 ERA that is easily the highest of any month during the season... During his Sox career, Lackey is now 14-12 with a 4.69 ERA while allowing 13 base runners per nine innings. We can certainly chalk last year up as a mulligan. But if Lackey ends up posting the same kind of totals this year that he did last, many of us will deem him a borderline bust.

2. Josh Beckett: Last night, the Indians swung and missed on just three fastballs. Three... Meanwhile, the left-handed batters who killed Beckett last year (a .940 OPS) went 5 for 14 with three walks and a sacrifice fly last night, good for a .357 batting average and .389 on-base percentage. Not good.

1. Carl Crawford: Find the list of players who have made an average of at least $20 million per season. They’re all sluggers. Crawford is well-rounded and dynamic, but not a home run hitter. As we’ve all noted, many players come to Boston from larger markets and need a year to adjust to the intense climate. Some, like Edgar Renteria, can’t get out fast enough. Whenever Crawford gets comfortable here – and he will – he will be a good, exciting player. In the interim, does anyone else find it worrisome that, as Peter Abraham noted today, Crawford was sitting in front of his locker with his head in his hands after last night’s game?

Sounds like, in spite of last night's Soriano/Robertson/Logan implosion, the Red Sox would still love to trade their current question marks for those of the Yankees, provided they could also trade current strengths with them.

And what of the Rays? What are their local media saying? Martin Fennelly of the Tampa Tribune reports that a Red Sox legend is... not hitting like a legend. Or even like a known steroid cheat:

Yes, what Tampa Bay Rays fans there were at Tropicana Field on Tuesday night, 13,000 and change, had paid their way in and that gave them all sorts of rights, which is only right.

But those were boos, loud boos and a lot of them, for Manny Ramirez, and it seemed a bit much.

Even Pat Burrell got more than four games. Hell, he got months.

Never mind that hardly anyone else is hitting for the Rays, as they lost again, this time 5-3 to the Angels, to go 0-4 for the first time in franchise history, which is saying something given this franchise's history.

The Rays are four games into their season and they're four games out of first place in the AL East. True, so are the Boston Red Sox. Misery loves company.

But everything gets magnified when 0-4 is the start to your season, the season after so many guys walked out the door. The Rays are hitting an astounding .138 as a team, but you can't boo everybody, can you?

Oh well, it was probably the weather. You know how cold it can get in the Northeast in early April. Whoops, The Trop is in St. Petersburg. That's in Florida. That's in the Southeast. Nice and warm. And, oh yeah, the damn thing has a dome. The weather was not an issue.

For the record, what were the attendances for the Yankees and Red Sox last night? There were 40,267 in Yankee Stadium II on a chilly Tuesday night, and I'm guessing most of the 10,000 or so empty seats were the $1,000+ ones; the Red Sox were in Cleveland, but their fans usually travel well, so taking potshots at their attendance might not be moot, nevertheless with only 9,025 fans, giving Jacobs Field the kind of crowd they used to get at cavernous Cleveland Municipal Stadium, being a midweek game, and the Indians being only 1-2 going in, I suppose Sox fans shouldn't be blamed for not inflating that figure.

The Mets did something totally unexpected last night: They unloaded on the Phillies, in Philadelphia no less, breaking a 1-1 tie in the 7th to win 7-1.

They're now 3-1, a half-game better than the Yankees. They've just beaten their arch-rivals, and are tied for 1st place.

This is the highlight of their season. Expect the Flushing Heathen to start acting like Tottenham fans making comparison to Arsenal. (Not a good idea, especially after the monumental egg that Spurs laid in Madrid last night. I may have a post about that tonight.)

Teams still undefeated? The Texas Rangers at 5-0, the Orioles and Cincinnati Reds at 4-0. Teams still winless? The Red Sox, Rays and Houston Astros at 0-4.