Joe Girardi, You Lost This One, Not Soriano 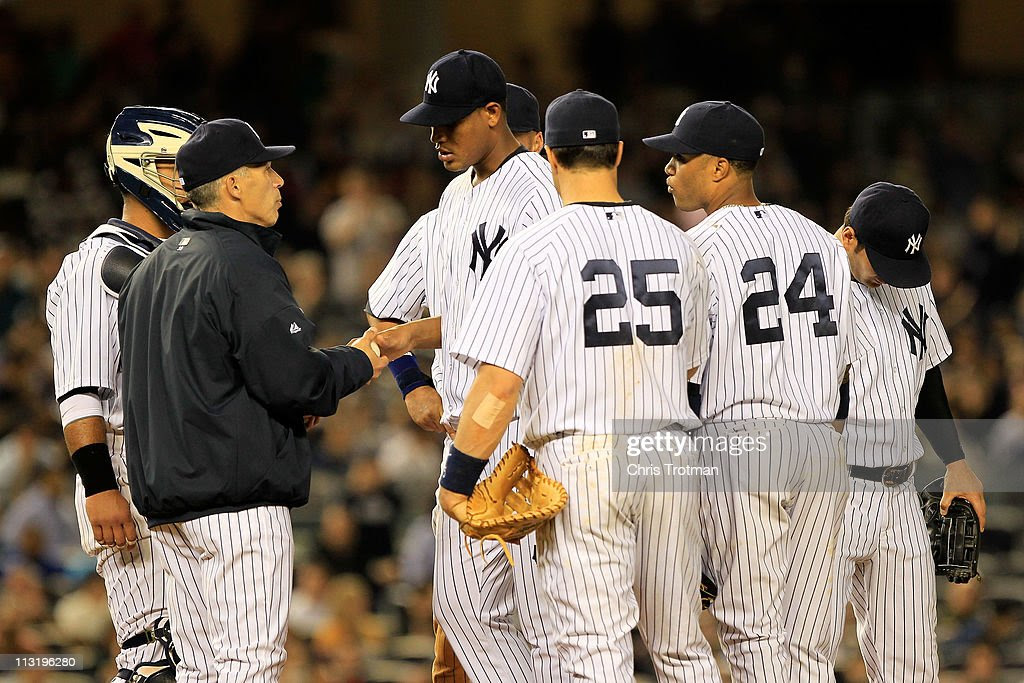 Saw my 1st live Yankee game of the season last night. The boss insisted. Not any member of the Steinbrenner family, my boss. (True story.)

It seemed like a good idea. I hadn't yet seen a live Yankee game this season, they were playing a team for whom I have no ill will, the seat was pretty good (down the right-field line, and the view was better than it would have been from the same seat at the old Stadium), the weather was just right, the fans behaved themselves (except for this one incomprehensible drunk behind us, who was yelling at Nick Swisher, though he was so slurred that I couldn't tell if it was to encourage or to slate), the Yankees hit 2 home runs, and there was a good pitchers' duel between the two starters.

There was only one thing wrong: The Yankees lost. Through no fault of their own.

Gavin Floyd started for the Chicago White Sox. I last saw him pitch live in 2001, 10 years ago, for the Lakewood BlueClaws. The Phillies brought him up in 2004, which turned out to be too soon, and traded him to the White Sox in the Aaron Rowand deal. But he won 18 for them in 2008, including the regular-season finale that forced a Playoff for the Central Division title with the Minnesota Twins (which the Twins won).

He's been reliable ever since, and, last night, he did something increasingly rare: He pitched into the 9th inning. He made 2 mistakes, Robinson Cano's 5th home run in the 2nd, and Brett Gardner's 2nd homer in the 5th. Other than that, he was great, allowing only 2 other hits, both to Derek Jeter, putting him a little closer to 3,000.

Ivan Nova started for the Yankees, and produced the longest and best outing of his career thus far. In 6 1/3rd innings, he allowed just 1 run (and that should have been unearned, as a hit was given on what should have been assessed as an error to Cano), 5 hits and 2 walks. He had good control, and seemed very poised.

But he let a couple of runners on in the 7th, and Yankee manager Joe Girardi panicked.

(To the tune of "My Darling Clementine")

Did Girardi leave him in to pitch the 8th? If you have to ask, you're either new to the world of the New York Yankees, or you're just, as they say in English soccer, taking the piss.

Girardi brought Rafael Soriano in to pitch the 8th. Big mistake. By all rights, Nova should still have been on the mound: He'd thrown only 92 pitches in 6 1/3, 54 of them for strikes. (Floyd threw only 102 in 8-plus.) At the very least, Robertson should have been allowed to continue throwing well. Or, if Joe really wanted a reliever, he could have called on Joba Chamberlain. But I never saw Joba in the pen (and I had a pretty good view of the Yankee bullpen). Is he hurt? Not that I've heard.

Soriano had nothing. Absolutely nothing. He got the 1st out, barely, as Alexei Ramirez swung at bad pitches. Then Soriano hit Carlos Quentin, which, in this situation, would have been a bad thing to do accidentally, and a moronic thing to do if intentional.

This turned out to be the key moment of the game, and not just for its immediate after-effect, because of who replaced him as a pinch-runner: A player I'd never heard of, Brent Lillibridge, a 27-year-old kid from the Seattle area, who debuted with the Atlanta Braves in 2008, went to the White Sox the next season, has been multi-positional but has played 2nd base more than anything else, and, thus far, has never had more than 112 plate appearances in a season. A utility player.

So there he was, the tying run on 1st with 1 out, and Paul Konerko was up. The Arizonan, the biggest hitting star of the last few years for the Pale Hose, including their 2005 World Championship, he has rather quietly inserted himself into the Hall of Fame discussion. He's just 35, could probably still be productive at 40, and already has 370 home runs. That's as many as Gil Hodges, and more than David Ortiz (who's the same age and needed steroids), Dick Allen, Ralph Kiner, Johnny Mize, Joe DiMaggio and Yogi Berra. (It's also more than Adam Dunn, now his White Sox teammate, with 356.)

Soriano served up a very saucy meatball, and there was no doubt about it: Home run Number 6 on the season for Konerko, Number 371 for his career, and the White Sox led, 3-2.

That turned out to be the final score. Boone Logan and Buddy Carlyle pitched the 9th for the Yankees, and both were fine. If either of them had been brought in instead of Soriano, the Yankees might have won.

Floyd (3-1) left in the 9th, and everybody was still too mad at Soriano (1-1) to call Sox manager Ozzie Guillen names as he came to the mound to take Floyd out. He left after allowing a leadoff single to Jeter, and things were looking up. Matt Thornton came in, and allowed Curtis Granderson to lay down a nice bunt to get Jeter to 2nd, as the tying run with 1 out. Next up were Mark Teixeira, Alex Rodriguez, and, if one of them got on, Robinson Cano. I liked the Yankees chances.

Thornton walked Teix, and Girardi took him out for pinch-runner Eduardo Nunez. Now the tying run was on 2nd, the winning run was on 1st, both runners were fast, there was still only 1 out, and A-Rod and Robbie were up. I was liking this.

Guillen replaced Thornton with Sergio Santos. A-Rod looked for all the world like the clutch hitter that some people think he finally became in 2009. I remember thinking about Lisa Swan of the Subway Squawkers blog, the biggest A-Rod fan I know: "If A-Rod hits one out to win this game, Squawker Lisa is going to... " I'd better not finish that thought, but let's say she would have felt real good. (I wonder if she would have noticed that Jeter started the rally?)

Sure enough, A-Rod gave it a ride, deep to right field, the opposite field, right in front of me. And... and Lillibridge, who'd stayed in the game to play right field, made a terrific catch. A-Robbed! Can't fault Alex: He hit a ball that should have produced a run.

Well, so what. Cano was up. Not a bad last hope to have. True, he'd mishandled 2 plays that were credited as hits but should have been errors. But he'd also homered, and that short porch still beckoned in right field.

Cano got a pitch he liked, he swung, and he sent a sinking liner into right. Surely, this was going to drop for a double. Jeter would score the tying run, and Nunez would have a pretty good shot at scoring the winning run!

Except that blasted Lillibridge, who I'd never heard of half an hour before, slid and made an even more amazing catch! The Stadium went from "Come on, Robbie!" to "Yeeeeahhhh!" to "Awwww... " in about 3 seconds.

Lillibridge, who'd scored the tying run ahead of Konerko on the latter's homer, made 2 "Holy Cow" plays to nail down the win for Floyd and the save for Santos (his 2nd).

In spite of their record, now 10-14, the White Sox are a good team. But I don't care how good the other team is: 2 games, 7 total hits and 2 losses is unacceptable.

And last night's loss wouldn't have happened if Joe Girardi had simply trusted his eyes, not the pitch count, and not the way pitchers have been handled these last 20 years or so, and let Ivan Nova continue pitching. Nova had earned it. Even if Joe had left Robertson in, or brought in Logan or Carlyle instead of Soriano, the game might have been won by the Yankees.

Joe Girardi, you lost this one. Not Soriano. Not Cano's fielding miscues (after all, he drove in a run). You lost it, Joe.

Soriano got the hell booed out of him with almost every pitch, but Girardi is the one who deserved it.

If this were European soccer, especially in Italy, but maybe also in England, the papers, TV pundits and radio hosts would be talking about a "crisis," wondering if the manager was about to be sacked.

That's one of the good things about baseball: A 2-game losing streak is no big deal.

Tonight, Game 3 of the 4-game series at Yankee Stadium II. Bartolo Colon and Mark Buehrle are the starters. As good as both men have been, could they really pitch much better than Ivan Nova and Gavin Floyd pitched last night? If they do, I wonder if Girardi will let Colon keep going. I'll bet Ozzie Guillen will let Buehrle pitch as long as he wants.

The Mets hung on to beat Washington. Baltimore beat Boston. Toronto clobbered Texas. Tampa Bay got rained out at Minnesota.