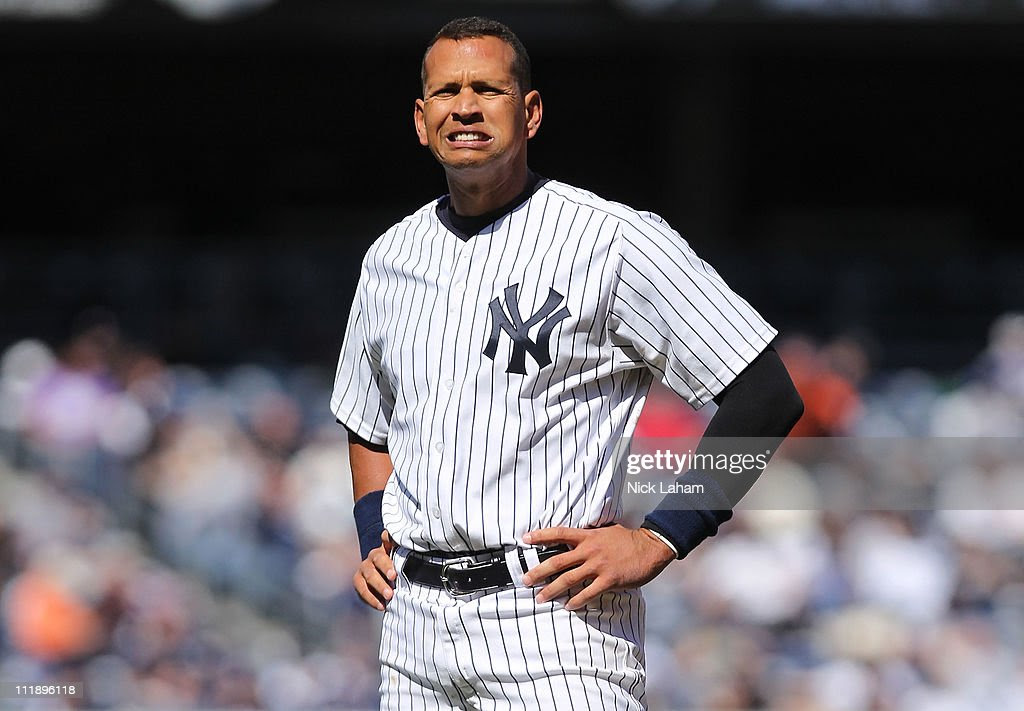 The Yankees were unable to complete the sweep at The Stadium II yesterday.

In spite of home runs by Mark Teixeira (his 3rd in as many games), Jorge Posada (his first 2 of the season) and Robinson Cano (his 1st), the Detroit Tigers had homers of their own by Miguel Cabrera (2 of them, continuing his Yankee-killing ways dating back to his rookie year that included the 2003 World Series) and Brandon Boesch, and beat the Yankees, 10-7.

Hughes did not have it, allowing 5 runs in 4 innings. Nor did Bartolo Colon, so heralded in his comeback in spring training: Although the former Cy Young Award winner, who previously drove the Yankees crazy with the Cleveland Indians and the Whatever They Were Calling Themselves At the Time Angels of Anaheim, struck out 5 and walked just 1 in 4 innings yesterday, he also allowed 4 runs. Joba Chamberlain allowed another run in the 9th, though that turned out to be meaningless.

Scherzer wasn't great either, allowing 6 runs in 5 innings, but, as the Tigers were winning when he left and did not give up the lead -- in spite of letting Phil Coke pitch the 6th and 7th, allowing 1 run -- Scherzer was credited with the win.

And there's certainly nothing wrong with taking 2 out of 3 at home. Especially against a team considered a fellow Pennant contender. If you win 2 out of 3 at home, that's 54 out of 81. If you then split on the road, 41 out of 81, that's 95 wins. That's usually enough to win the American League East. (I looked it up: From 1996, the first uninterrupted 3-division season, to 2010, the average number of games needed to win the AL East -- that is, the number of games won by the 2nd-place team plus 1 -- is 93.)

The Baltimore Orioles now lead the AL East at 3-0, with the Yankees and Toronto Blue Jays both 2-1, while the Boston Red Sox and Tampa Bay Rays are both 0-3.

With Rafael Soriano having gone to the Yankees and Carl Crawford having gone to the Red Sox, the Deviled Eggs could not afford to also lose Evan Longoria. But he's gone on the Disabled List. Presumably, for a broken heart, after getting cheated on. No, wait, that's Eva Longoria. He'll be out 3 weeks. Looks like the Golden Age of Tampa Bay Baseball is over. One brief gray-domed moment.

The Mets are 2-1. No doubt, the Flushing Heathen are celebrating the fact that, with 159 games to go, their boys are equal to the "cheating" "Highlanders." 'Scuse me while I roll my eyes.

Of course, the Mets had a good reason for winning yesterday: Javier Vazquez, ol' Home Run Javy, was pitching for the Florida Marlins. It was 7-0 when he was mercifully (to the fans) lifted.

Rest in peace, Lou Gorman. He helped build winning teams in Baltimore in the 1960s and Kansas City in the 1970s before becoming the general manager of the Red Sox, building a team that won 3 Division Titles in 5 years, including the 1986 AL Pennant. He was 82.

One more thing that bothers me, as the Yankees prepare to begin a home series with the perennial AL Central Champion (and 4 times a Yankee postseason victim since 2003) Minnesota Twins, with Ivan Nova starting against Scott Baker: John Sterling did it again.

Yes, again. With the Yankees down 2-0 in the bottom of the 1st, Teixeira was on first, and Alex Rodriguez was up.

Now, I didn't know whether the ball would be caught, or go off the wall, or end up as a foul ball. But I knew, just knew, that it was almost going to be a home run, but not quite.

And, sure enough, Sterling said the following: "Theeee pitch, it's swung on! And there it goes! Deep to center field! That ball is high! It is far! It is... caught at the wall!"

Sterling did it 5 times last season, and that's just when I was listening. God only knows how many times he actually went into, "That ball is high! Is it far! It is... " without being able to truthfully say, " ...gone!"

Took him just 19 innings into this new season to do it.

Everybody who actually knows him -- except Daily News sports-media columnist Bob Raismann, who doesn't seem to like anybody, and calls the Suzyn Waldman-John Sterling team "Ma and Pa Pinstripe" -- thinks John Sterling is a great guy. He may be.

First, in Sterling's defence, I was at yesterday's game, and ARod long out really appeared to be a HR off the bat

Second, interesting note about Lou Gorman, in the early 80's he worked for the Mets as a VP under Frank Cashen heading player development--an ironic twist being Gorman helped put together the young Mets talent that helped beat the Red Sox in 1986--Further, it was under Gorman when the Mets drafted a Junior College standout, who passed on the Mets to transfer to a four year Division I college-a pitcher by the name of Roger Clemens, who Gorman remembered a couple of years later and drafted for the Sox...