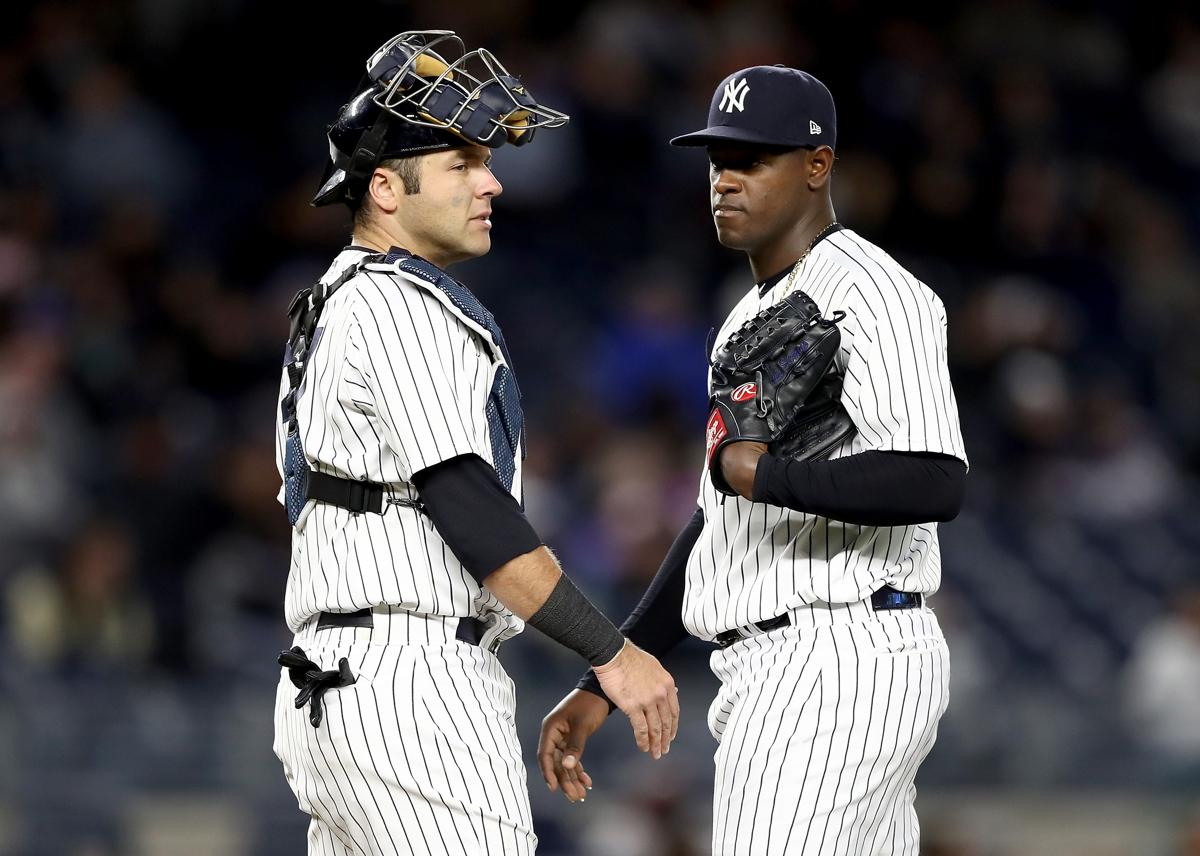 The Yankees begin a quick 2-game series in Toronto against the Pesky Blue Jays, after taking 2 of 3 at home against the Texas Strangers. Not really "revenge" for last season's American League Championship Series, but definitely a message sent to the team that came into the series with the best record in the AL.

In the Sunday night game, the Yankees won, 6-5. Robinson Cano, Russell Martin and Curtis Granderson each hit his 4th home run of the season. CC Sabathia did not pitch well, and Joba Chamberlain blew a lead for him. But Rafael Soriano, who has had a couple of howlers so far, was great in relief, and got the win (1-0), dropping his ERA to 8.10.

Mariano Rivera got his 7th save of the season, and suddenly Trevor Hoffman’s career record of 601 not only looks in serious jeopardy, but I think Mo is going to get it this season.

The losing pitcher for Texas was Arthur Rhodes (0-1). Yes, kids, the same Arthur Rhodes the Yanks smacked around in the postseason in 1996 (Baltimore Orioles), 2000 and 2001 (Seattle Mariners). I didn’t even know he was still in the majors. Must be because he's that most precious of commodities (roll my eyes), a lefthanded reliever. But, surely, by now, the lesson must have been learned that he can't pitch against the Yankees.

He proved that again on Sunday, giving up the winning hit in the bottom of the 8th, a single by the Yankee 3rd baseman that gave the Yanks a the lead and ultimately the win. Only it wasn't Alex Rodriguez, who sat the game out with a strained oblique. (Sounds like a beauty product, take it from there and make your own joke.)

It was Eric Chavez, the former Oakland Athletics star who talked trash about the Yankees in the 2001 AL Division Series, and has never been the same player since. Good thing he found a little of that on Sunday, because, despite his fielding diversity, Ramiro Pena is not the answer to the uneasy question, "If A-Rod can't play, who should be his backup?"

The Yankees are now 9-5, 3 games ahead of both Toronto and a Tampa Bay Rays team that has somewhat shaken off a poor start. The Baltimore Orioles, the Yanks' opponents this weekend, having won 6 of their first 7, have now lost 8 in a row, and are 3½ games back. Perhaps the Buck Showalter renaissance has already ended. In each case, these teams are 4 games behind the Yankees in the All-Important Loss Column (AILC). The Red Sox are 4½ back, 5 in the loss column.

Hours until the next North London Derby: 25, tomorrow, at White Hart Lane. At the rate Arsenal are going, it might just be the last meaningful game of the season.

Days until the Red Bulls play again: See below.

Days until the Red Bulls play another "derby": 2, this coming Thursday night, against their biggest long-term rivals, D.C. United, at Robert F. Kennedy Stadium in Washington. They next play the team that should be their biggest rivals, due to the whole New York-New England thing, the New England Revolution, on Saturday, June 11, at Red Bull Arena. And they next play their closest rivals, the Philadelphia Union, on Thursday night, October 20, at Red Bull Arena.

Days until East Brunswick High School plays football again: 146, on Friday night, September 9, and the opponent and location are TBD. Just 21 weeks. Or, if you prefer, less than 5 months.

Days until the Devils play another local rival: As yet unknown. The next season's schedule hasn't been released yet, save for the season-openers at the neutral but hockey-loving site of Helsinki, Finland, games that will include the Rangers. That will be on October 7. Figure the Devils' season opener will be the next day, which is 177 days from now. Figure they'll probably play a local rival, either the Rangers, the Islanders, or the Flyers soon thereafter, maybe a week after, so, tentatively, I'm going to say the number of days is: 182. A little over 6 months.

Days until the Rutgers-Army football game at Yankee Stadium: 209.

Days until the next East Brunswick-Old Bridge Thanksgiving clash: 220.

Days until Super Bowl XLVIII at the Meadowlands: 1,022.

Days until Alex Rodriguez hits his 763rd career home run to become as close to a "real" all-time leader as we are likely to have: 1,633 (estimated).
Posted by Uncle Mike at 1:15 PM