That's Two... Or Rather, One and a Half Out of Four 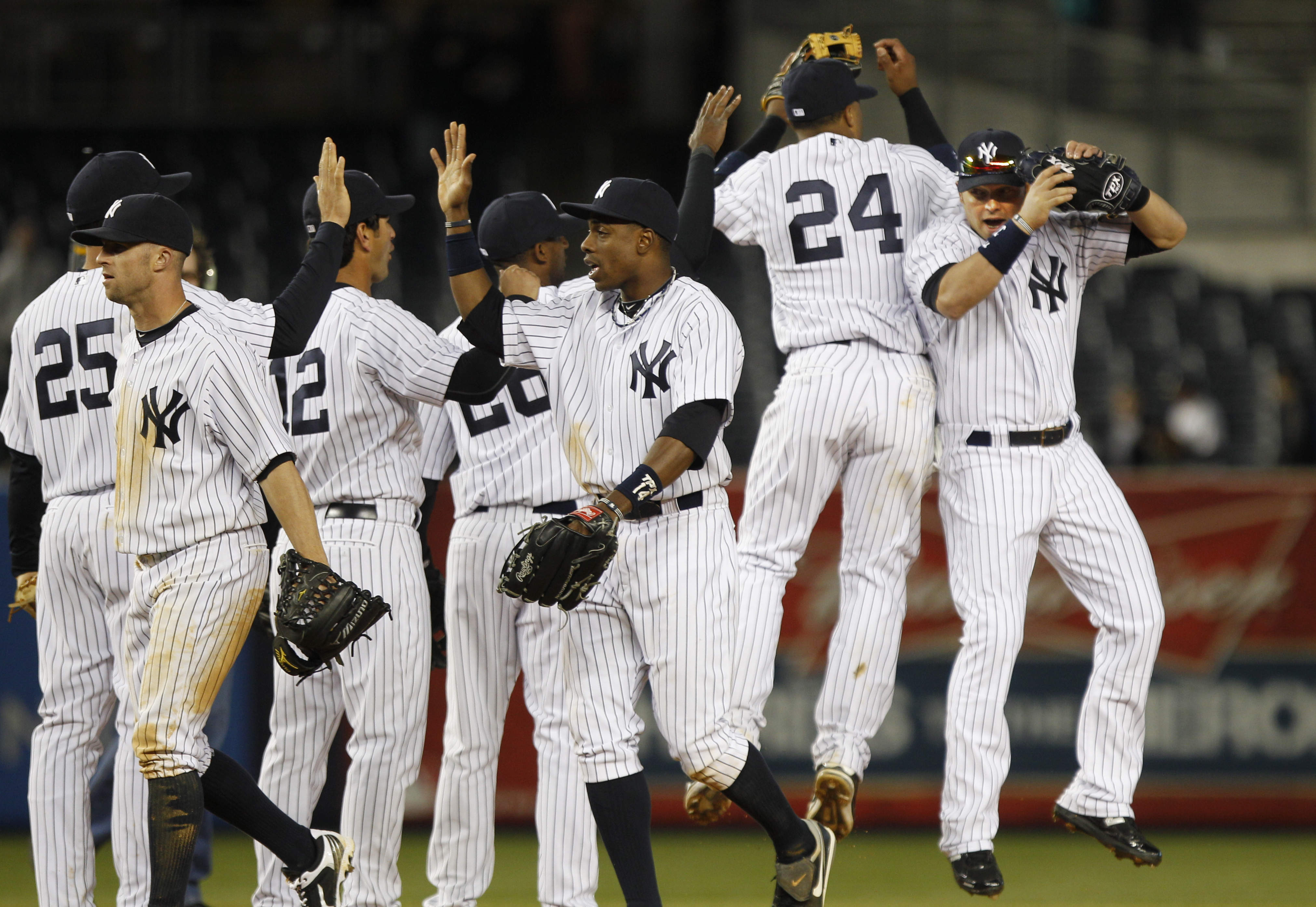 Yankees 10, Detroit Tigers 6. The Yankees are 2-0 to start this season.

Bottom line: After the season Burnett had last season -- somebody said it was probably the worst season any starter ever had for a Yankee team that still made the Playoffs -- any game in which he pitches and we win is a good game. That he was not horrible is a good sign; that such is a good sign is not one, but I'll gladly take it.

The Red Sox lost yesterday, although they're winning at the moment. So the Magic Number to eliminate the Sox is now 159. However, the Toronto Blue Jays are 2-0 like the Yanks. Two other teams are 2-0, the Chicago White Sox and the San Diego Padres.

Tonight, the Mets and Marlins are tied 2-2 in the 7th as I type this. This after the Mets lost their season opener and looked, you guessed it, like the Mets. I don't want to say that the Mets stink... but they're gonna stink whether I say it or not, right?

The Devils are done. They lost 3-1 to the Montreal Canadiens, thus officially, mathematically, eliminating them from Playoff consideration. For the first time in 15 years, and only the 2nd time in 22 years, an NHL season is played in which the Devils will miss the Playoffs.

The Red Bulls took a 1-0 lead over the Houston Dynamo on a goal from Dane Richards, on an assist by the newly-acquired Dwayne DeRosario. But Hans Backe's Viking Army blew it shortly thereafter, and could only get a 1-1 draw.

Arsenal threw away their chance at the English Premier League title today, putting up a pathetic effort against Blackburn Rovers, getting a groan-inducing 0-0 draw. Counting injury time, the match had 98 minutes of play. Red Bulls-Dynamo had more action in the first 20.

After seeing that, I was not in the mood to spend a lot of money and go to a live sporting event, even though the Yankees, Devils and Red Bulls were all at home today. Looks like I'm gonna go 1 1/2-for-4.

I'll certainly take the Yankee win, a draw against a good team like Houston isn't too bad for the Red Bulls, and I can't be too surprised that the Devils lost to Montreal, a Playoff-bound team this season and, historically, the Yankees of hockey. But what The Arsenal did today? Not good enough!

I am not saddened. I am not disappointed. I am enraged.

I am glad the Yankees and Red Bulls have both started up again. Arsenal are really pissing me off.

Days until the next Yankees-Red Sox series begins: 6, this coming Friday, at Fenway Park.

Days until the Red Bulls play again: See below.

Days until the Red Bulls play another "derby": 7, a week from today, against the Philadelphia Union at PPL Park in Chester, Pennsylvania. They next play their biggest long-term rivals, D.C. United, on Thursday, April 21, at Robert F. Kennedy Stadium in Washington. And they next play the team that should be their biggest rival, due to the whole New York-New England thing, the New England Revolution, on Saturday, June 11, at Red Bull Arena.

Days until the Devils play another local rival: 7, a week from today, against The Scum at Madison Square Garden. Then they close the season the next day, at home against the Boston Bruins.

Days until the next North London Derby: 19, Wednesday, April 20, at White Hart Lane.

Days until East Brunswick High School plays football again: 161, on Friday night, September 9, and the opponent and location are TBD.

Days until the Rutgers-Army football game at Yankee Stadium: 224.

Days until the next East Brunswick-Old Bridge Thanksgiving clash: 235.

Days until the last Nets game in New Jersey: 387 (estimated).

Days until Super Bowl XLVIII at the Meadowlands: 1,037.

Days until Alex Rodriguez hits his 763rd career home run to become as close to a "real" all-time leader as we are likely to have: 1,648 (estimated).
Posted by Uncle Mike at 9:35 PM