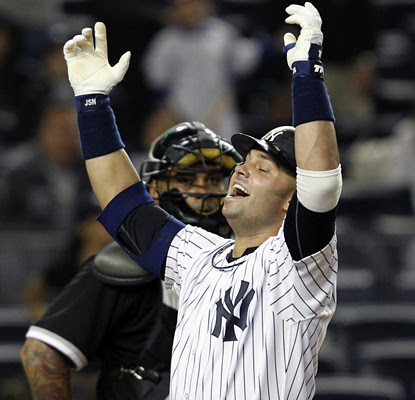 Back in 1984, when Yogi Berra was in his 2nd go-around as manager of the greatest sports franchise in the world -- and I don't mean those (George Carlin word)s at Manchester (George Carlin word)ing United -- the story goes that he saw Don Mattingly stay in the batting cage for a long time, and he said, "Donnie, you're going to hit yourself right into a slump."

This from a man who allegedly once said, during a difficult stretch of his playing career, "Slump? I ain't in no slump. I just ain't hitting."

Going into last night's finale of a 4-game home series with the Chicago White Sox, it could have been said of a lot of the Yankees that "They just ain't hitting." In the preceding 3 games, they'd scored only 6 runs on 13 hits, winning only 1 of the games.

Last night, they broke out. They unloaded on the Pale Hose for a 12-3 win.

Nick Swisher was also in a nasty slump, striking out when swinging at some awful pitches. But last night, in the bottom of the 7th, he hit a scorching liner down the right field line. The only question was whether it would be fair or foul.

Unless, of course, you are John Sterling. When I heard the radio highlights later (this time, I saw it on TV first), Sterling left no doubt, going right into, "Swung on, and there it goes! Deep to right field! That ball is high! It is far! It is gone!" No pause between "It is... " and " ...gone!" He knew it all the way.

Well, I saw it on TV, and it was just barely fair. Counts the same, though.

Nicholas Thompson Swisher of Parkersburg, West Virginia plays for the love of the game. The fame? The glory? He likes those, too. But you can always tell when a guy loves the game.

Of course, all of this would have mattered very little if the Yankees hadn't gotten good pitching. They got it, from CC Sabathia (2-1), who went 7, allowing 3 runs, none of them earned, on 7 hits and 1 walk. They also got it from Lance Pendleton, who pitched a scoreless 8th and 9th. (Obviously, no save with a 9-run lead and only 2 innings. Had he pitched 3, according to the rule he would've gotten the save.) Edwin Jackson (2-3, winning his first 2 decisions but has now lost his last 3) got the loss for the South Siders.

Tonight, the Yanks begin a 3-game home series with Toronto, those Pesky Blue Jays. Let's hope the Yankee Fans leave The Stadium (II) as happy as the crowds leaving Buckingham Palace this morning, following the balcony reception for the Duke and Duchess of Cambridge, formerly Prince William and Kate Middleton.

In the remainder of the Queen's reign, and in the presumptive reigns of the men currently known as Charles, Prince of Wales, and William, Duke of Cambridge, may the glory keep on coming -- for both the royalty of Britain and the royalty of baseball, the New York Yankees.

And while we're on the subject of London...

* Under George V, Arsenal won the League 4 times and the FA Cup 1.

* Under George VI, Arsenal won the League twice and the FA Cup once.

* And under Elizabeth II, Arsenal have won the League and the FA Cup 7 times each.

Hopefully, they'll return to their trophy-winning ways while Elizabeth is still on the throne. After all, I hear she's an Arsenal fan. Prince Harry is one, too, although Prince Charles has been said at various times to support Liverpool and Burnley, and I hear William supports Aston Villa, the Birmingham club.