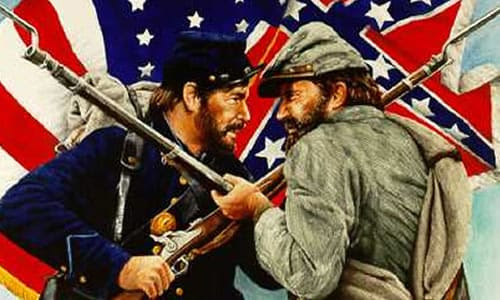 Worse than December 7, 1941, when Pearl Harbor was attacked.

Worse than September 11, 2001, when the worst terrorist attack ever to hit this nation was launched.

On April 12, 1861, a group of men decided it was better to commit an act of treason, and attack their own country's military installation at Fort Sumter, South Carolina, than to accept the self-evident truth that all men are created equal.

The American Civil War lasted 4 years. The Confederacy, the South, the slaveholders, started it, and it was ALL about slavery. There was no "State's right" that they were fighting for, except slavery, which is not a right. The Union, the North, the men fighting for freedom for all, ended it, and they won. Four years, and six hundred and twenty or so thousand deaths, later.

As far as I can tell, one native of my hometown of East Brunswick, New Jersey -- which had been separated from North Brunswick and incorporated as a Township only in 1860 -- died in the Civil War. His named was William Augusts Rogers, and he was 22 years old when he was killed at the Battle of Chancellorsville, about 60 miles southwest of Washington, on May 6, 1863.

The Yankees-Red Sox rivalry is a lot like the Civil War. Aside, of course, from the fact that my side is the North in the Civil War and the more Southern of the two sides in baseball:

* Like the South, Red Sox fans embrace a sort of "Lost Cause," that of the great New England baseball tradition that began with the original Boston Red Stockings, who began in 1871 in the National Association. This team moved to the National League in 1876. From 1872 to 1898, this team, known for most of that time as the Beaneaters (no joke), won 12 Pennants (over both of those leagues) in 27 years. Eventually becoming the Braves, they won just 2 more Pennants before moving in 1953.

But the Red Sox became New England's team, and won 4 Pennants in 7 years from 1912 to 1918, winning the World Series each time. Then, after the 1919 season, owner Harry Frazee began breaking them up, selling Babe Ruth and other stars to the Yankees, and the Red Sox took a generation to recover. Sox fans have hated not just the Yankees but New York City, and even New Jersey, which has a lot more Yankee Fans than Met fans, ever since.

* Like the South, Red Sox fans tried to rewrite history to explain that they, not their conquerors, were the more moral side; and that they, not the people they were oppressing, were the real victims. From Jefferson Davis' memoir to recent books trashing Abraham Lincoln, and from the writings of John Updike to the sports columns of Bill "The Sports Guy" Simmons, the Yankees are "the Evil Empire" and "the Dark Side."

I guess they forgot about the Sox' headhunting of the Yankees well before Pedro Martinez, the steroid use of David Ortiz and Manny Ramirez, and the various assaults of Sox fans on Yankee Fans in and around Fenway Park.

* To be totally fair, both the South and the Red Sox have had wonderful writers. I'm not even counting fiction writers like William Faulkner, Thomas Wolfe, Eudora Welty, and Willie Morris (and Morris also wrote very well about baseball). I'm talking about writers on the subject of the Civil War, including Douglas S. Freeman, Shelby Foote and William C. Davis. (The North can count Bruce Catton, James McPherson and Richard Shaara, among others; and C. Vann Woodward, though Southern, wrote The Strange Career of Jim Crow, a damning indictment of the postwar South.)

The Red Sox can count on the aforementioned John Updike, plus John Cheever, A. Bartlett Giamatti, Robert B. Parker, Doris Kearns Goodwin (who also wrote a great book on Lincoln), and sportswriters Leigh Montville, Bob Ryan and Dan Shaughnessy.

* Like the South, the Red Sox had a problem with black people. They were the last team to integrate, not doing so until 1959, 12 years after the Brooklyn Dodgers became the 1st team to do it. Even the Yankees had done so 4 years earlier, with Elston Howard.

While the Dodgers signed Jackie Robinson, Roy Campanella and Don Newcombe; the New York Giants signed Monte Irvin, Hank Thompson, and soon thereafter Willie Mays; the Chicago Cubs signed Ernie Banks, the Chicago White Sox signed Minnie Minoso; and even the crosstown Braves signed Sam Jethroe, and already had Hank Aaron in the organization before they moved, the Sox' 1st black player was... Elijah "Pumpsie" Green? This guy was so bad, he was cut by the '63 Mets!

As late as 1985, Tommy Harper, a pretty good player in his day, sued the Red Sox for what he thought was a race-based firing as a coach. And until the 1990s, when Mo Vaughn was the Sox' big star, few blacks would go to Fenway, for fear of facing discrimination and violence.

* Both the Confederacy and the Red Sox have a heavily overblown movie made about their Lost Cause: Gone With the Wind and Fever Pitch. There's also a British connection: The English Vivien Leigh starred in GWTW, while Fever Pitch was based on a British soccer-themed book and film of the same name. Both films treated the aggrieved side as morally superior to their aggrievers.

* And, of course, both the South and Red Sox fans call their rivals "Damn Yankees." (In the South's case, often written as one word: "Damnyankee.")

Still, more often than not, the Yankees win in both.

I was going to do an All-Civil War lineup, but I couldn't fill it out. I found plenty of players named Davis, Lee, and Jackson. Even Hall-of-Famer Travis Jackson, who was nicknamed "Stonewall." But I wasn't keen on including my man Reggie Jackson by connecting him with a Confederate general.

I had Dick Stuart (Jeb) and Mudcat Grant (Ulysses S.), but there were no decent players named Lincoln, or Sherman for that matter (and I didn't want to cheat by using first names, i.e. former White Sox All-Star catcher Sherm Lollar).
Posted by Uncle Mike at 7:18 PM