Warning, explicit lyrics, after all this post is about the Rangers

Brett Gardner starting in center field, not Melky Cabrera? I'm OK with it, especially if it leads to Melky waking up and playing like he did in 2006 and '07.

Now, if we can just get someone at 3rd base on whom we can rely... both before and after A-Roid comes back.

Tonight is a Devils-Rangers game, so I'm going to be like Colin Firth in the original, good-guys-won, soccer version of Fever Pitch:

"Jesus, Paul, you need medical help! You've got some sort of disease that turns people into miserable bastards!"

There, I actually said it, instead of "freaking" or "f---ing." I hate the fucking Rangers.

No, I really shouldn't say that. Here's what I should say:

And that would be true regardless of whether Sean (Not Man Enough to Even Qualify As a Punk) Avery were back with them.

Hate the Rangers. Loathe them. Despise them. With a flaming scarlet-and-black passion. 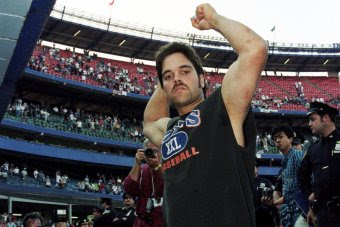 This is what happens when I don't post in this blog for a month and a half: Big things happen, or are revealed.

Murray Chass, former New York Times columnist and one of the great sportswriters of all time, blogged about it. If Chass writes it, chances are, it's right.

Mike Piazza was the symbol of the New York Mets from his 1998 arrival until he was pushed out in 2005... a story which has still never been truly explained. He is the most accomplished offensive player they've ever had, and ranks 2nd only to Tom Seaver among the franchise's playing legends.

And he used steroids.

So who's "the 2000 World Champions" now, Met fans? Because your boy is every bit as guilty as Roger Clemens!

Yeah, yeah, yeah, "We need proof." That's what we said when the Clemens allegations hit the media. And, right now, there's exactly the same amount of publicly-revealed proof on Clemens as there is on Piazza -- zilch. (Which is still less than we have on Alex Rodriguez, where we have an actual confession.)

This means that in the 2000 World Series, your juiced players weren't good enough to beat our players, juiced or not. It also explains why Piazza flipped out when Clemens threw that bat across the foul line, far enough away from Piazza to get a separate ZIP Code.

And I don't ever again want to hear "Mike Piazza is the greatest-hitting catcher of all time." No, he wasn't. Mickey Cochrane, Gabby Hartnett, Ernie Lombardi, Roy Campanella, Johnny Bench... oh yeah, and Bill Dickey and Yogi Berra. They were all better.

Jose Canseco once said that the difference between him (462 career home runs) and his "identical" twin brother Ozzie (462 less than Jose) was that Jose used steroids and Ozzie didn't.

Then again, Ozzie may have had Jim Bouton's problem with amphetamines: "In my case, greenies probably improved my performance about 5 percent. Unfortunately, that wasn't enough." After all, most of those suspended for steroid use thus far have been marginal players, as Ozzie Canseco was, and as Bouton became after his 1965 elbow injury that turned him from a kooky kid that the Yankees tolerated because he won 39 games in 2 years (1963-64, 41 if you count World Series games) into an injured has-been whose jokes weren't funny anymore... to them, anyway. (The Yankees' intolerance for nonconformists and controversy predates George Steinbrenner by decades.)

So... despite a rather pungent odor coming from the Prudential Center last night (the Devils blew a 1-0 lead to Carolina with 8 minutes left and lost 2-1), I'm going to spend most of this day chuckling and smirking.

Once again, the Flushing Heathen have nothing to say. And the Curse of Kevin Mitchell lives.
Posted by Uncle Mike at 12:13 PM 3 comments: