A Sampler of Baseball's Royal Nicknames 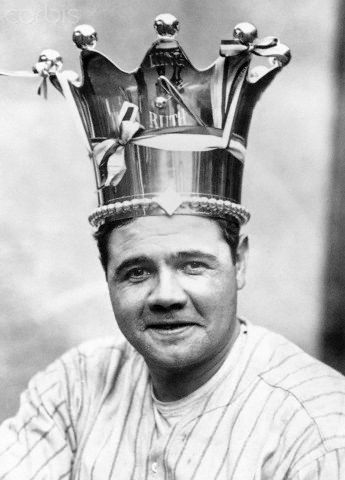 In connection with the royal wedding of Prince William of Wales and Kate Middleton – now William and Catherine, Duke and Duchess of Cambridge, Earl and Countess of Strathearn, Baron and Baroness Carrickfergus (one title each for England, Scotland and Northern Ireland, in addition to still being royals of Wales) – I provide this primer on the royal nicknames of baseball.

There was also pitcher and longtime pitching coach Clyde King, probably the most notable baseball figure whose surname was King. The St. Louis Browns (forerunners of the Cardinals rather than the Browns who became the Baltimore Orioles) won 4 straight American Association Pennants in the 1880s, and had a pitcher named Charles Koenig, who Anglicized his German name to King, and was nicknamed Silver King. The 1893 change of the pitching distance from 50 feet to 60 feet 6 inches essentially ended his effectiveness.

Then, of course, there was the huge Yankee slugger Charlie "King Kong" Keller, the buffoonish Met slugger Dave "Kong" Kingman, and pitcher Brian Kingman. And early black player and baseball historian Sol White, a member of the Hall of Fame, was born King Solomon White.

There were father and son big-league pitchers both named Mel Queen. They should not be confused with any number of players who were "drama queens." Or any players who may have been gay.

Edwin Donald Snider was nicknamed Duke by his father, well before Dodger fans nicknamed him the Duke of Flatbush. The famed '61 Yankees had Duane Frederick "Duke" Maas, and Duane B. "Duke" Sims, in the last game at the pre-renovation Yankee Stadium in 1973, not only was the final Yankee starting catcher, but hit the last home run. His 100 career home runs (exactly 100) are the most for any player born in the State of Utah.

There have, apparently, been only 2 major league players whose last name was Duke, and 3 with the name Dukes. Of these, the best is Zach Duke, the current ace (if you want to call him that) of the Pirates.

What's the count, ump? Asahel Brainard, of the 1st professional team, the 1869 Cincinnati Red Stockings, was nicknamed Asa, and it is supposedly from his name that we derived the word ace for a top pitcher. He was also nicknamed Count. The 19th Century pitcher Tony Mullane was also nicknamed the Count, and "the Apollo of the Box." (When he started, pitchers threw from a flat box, not a raised mound, hence the phrase, "knocked out of the box.")

There have been recent All-Stars named Marquis Grissom and Jason Marquis. There haven't been many Barons in baseball, although both 1980s Cubs pitcher (now ESPN analyst) Rick Sutcliffe and 1990s Texas Rangers 3rd baseman Thurman Clyde "Rusty" Greer were nicknamed the Red Baron. (Wonder if they ever got cursed at by a shortstop-playing beagle?)

There was an outfielder for the early Philadelphia Athletics named Bristol Robotham Lord. He was nicknamed the Human Eyeball, and, worse, a shortening of his first name made him "Bris." Ouch. Or, should I say, Oy vey.

But, aside from 1930s Brooklyn Dodger infielder Jimmy Jordan, there appears to have been no ballplayer whose nickname was "Lord." Granted, there is a religious connotation, but it's also a nobleman's title. Oddly, there have been 2 major leaguers, both playing briefly in the 19th Century, whose nicknames were "Lady": Charles Baldwin and Harley Payne.

The Kansas City Royals were named for Kansas City's annual American Royal Livestock Show, not for the Negro League's Kansas City Monarchs, or for the Crown Center shopping center, which opened in 1971, 2 years after the Royals debuted. Alabama's top team, Class AA, is the Birmingham Barons.

There has never been a player nicknamed "Monarch" or "Emperor," although there have been 4 players whose name is the German for emperor, "Kaiser." And early 20th Century pitcher Irvin Key Wilhelm was, in that era of World War I, nicknamed Kaiser Wilhelm. There has never been a player with the name or nickname of the Russian equivalent of emperor, "Czar."

Of course, both "Kaiser" and "Czar" actually come from the Roman name "Caesar," and there have been plenty of variations on those, mostly from Latin America: 1960s Minnesota Twins infielder Cesar Tovar, 1970s Cincinnati Red outfielder Cesar Geronimo, 1970s Houston Astro outfielder Cesar Cedeno, longtime 2nd baseman Julio Cesar Franco, and current major leaguers Julio Cesar Lugo, Cesar Ramos and Cesar Valdez. And current Yankee Eric Chavez's full name is Eric Cesar Chavez, although, as a Mexican-American and a native of Southern California, he was most likely named not for the ancient Roman Emperor Julius Caesar but for the labor activist Cesar Chavez.

Finally, of course, there has been one Sultan: The Sultan of Swat, Babe Ruth, who had a slew of similarly alliterative nicknames, including King of Crash (sometimes King of Clout but also sometimes Caliph of Clout or Colossus of Clout). He was also called the King of Swing, although that nickname is usually given to the great clarinetist and bandleader Benny Goodman.
Posted by Uncle Mike at 11:41 AM

Don't forget some Princes--including current Brewer slugger Prince Fielder, Pirate, Dodger and Phillie Cathcher Tom Prince, not to mention Pirates Hall of Fame Broadcaster Bob "The Gunner" Prince. Other notable Kings include journeyman outfielder Mike Kingery, and Tiger Pitcher Eric King (who I only remember as I had him on a rotisserie team.) Baltimore had an outfielder in the late 90's/early 2000's Eugene Kingsale a surname that always seemed to resonate with me. And don't forget a key member of the 40's/50's Yankee Dynasty era outfielder Charlie "King Kong" Keller--if only because of a favorite story of mine that he hated the nickname, and teammates would goad on Phil Rizzuto to call him that, resulting in Keller stuffing Scooter into his locker...

Sorry, but I also overlooked this--a fair number of MLers (including a mutual Yankee fave of childhood), with the first name Reggie, itself short for the name Reginald, the latin word for King...