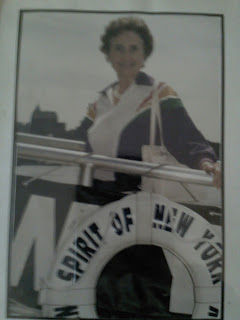 You may have noticed that, last night, for the first time all season, I did not post about the previous day's Yankee game. It's because I had a lot on my mind, because it was the anniversary of the last time I saw my grandmother, which was a harder day than the day she actually died. (The piece on The Natural was already written up, ready to go.)

My Grandma lived through a lot. The Great Depression, losing her parents before she could graduate high school (John Adams in Ozone Park, Queens), having to drop out during her senior year to get a job, the home front of World War II, the way America thought of women in the 20th Century, a Red Scare that tried to marginalize people who thought the way she did, Dodger-Giant games at Ebbets Field and the Polo Grounds, a marriage that was frequently difficult, raising a daughter who was as spirited and as stubborn as she was, having a grandson who was a bit off, over 30 years of living in New York City, and half a century of living in New Jersey.

The Depression really left its mark on her. I used to spend Thanksgiving weekend with her, and would help her shop on the weekend. One time, we walked from the car to the store, and I saw a penny lying on the ground. I knew she was superstitious. But the penny was tails up. Finding a penny heads up is good luck; finding one tails up is just 1 cent. So I ignored it.

Her, with her N'Yawk accent kicking in: "Whaaaat?!? It's money!"

I picked it up.

But she survived it all, and never gave an inch. She was a Maude long before anyone heard of Beatrice Arthur.

She detested unfairness in all its forms, and always supported the underdog. It's why she was a New York New Deal Democrat until the end. It's why she was a Brooklyn Dodger fan, and then a Met fan. It may even be why, even though she was old enough to remember the New York Rangers as a regular Stanley Cup winner, and remember maybe not their 1928 Cup win, but certainly their wins of 1933 and 1940, she turned to the New Jersey Devils when she got into hockey as an old lady.

She listened to Game 3 of the 1951 Dodger-Giant Playoff on the radio, and when she heard that Ralph Branca was coming in to pitch to Bobby Thomson, she turned the radio off. She knew that Branca only had a fastball, and that Thomson could only hit a fastball, and that Thomson had already hit a home run off Branca in Game 1 of the Playoff, and that Branca tended to give up home runs ("gopher balls," she always called them when Branca's name came up). She knew Thomson was going to hit the Pennant-winning home run.

Like any good fan of the Dodgers, she hated the Giants long after the teams moved to California. When the Mets came along, she was always glad to see them beat the San Francisco Giants -- and the Los Angeles Dodgers.

Like any good fan of the Dodgers, the Giants, or the Mets, she hated the Yankees. (We had a few discussions about which team was better.) She hated Joe DiMaggio. She hated Mickey Mantle. She hated Yogi Berra -- making her a true rarity. She hated Billy Martin. She really, really hated Casey Stengel.

The opposite was what she hated in Billy Martin: She could never stand hotheads. That's why she admired Jackie Robinson so much: She knew how much crap he was putting up with, and loved that he turned his anger into performance, rather than fighting back. It's why she admired Gil Hodges, and loved that he went from playing 1st base and hitting home runs for the Dodgers to managing the Mets to the 1969 World Championship.

On April 15, 1997, the Mets played the Dodgers at Shea Stadium. It was Jackie Robinson Night, the 50th Anniversary of Robinson's debut. I won tickets to it in a radio contest. I knew I had to take her. We had great seats behind home plate, saw some old Dodger greats (including Sandy Koufax -- wearing a Mets cap, as he was then feuding with Dodger management), saw President Bill Clinton give a speech, and heard Commissioner Bud Selig announce that Robinson's Number 42 would be retired for all of baseball. And we saw the Mets win.

That was the last live Major League Baseball game she ever saw. When the minor-league Lakewood BlueClaws arrived in 2001, just 5 miles from her house, she went to a few of their games over the next 5 seasons. By the time the 2006 season began, she was in the hospital, never to return. The BlueClaws won their 1st Pennant that year. I'd like to think she had something to do with that.

She wouldn't want me to tell you that I still haven't gotten over losing her. She would want me to tell the 2 great-granddaughters that she didn't quite get to see (and the 3rd that's about to arrive) about her, and for them to know that the world is easier for girls like them because of women like her. And I have. And I will.
Posted by Uncle Mike at 7:40 AM