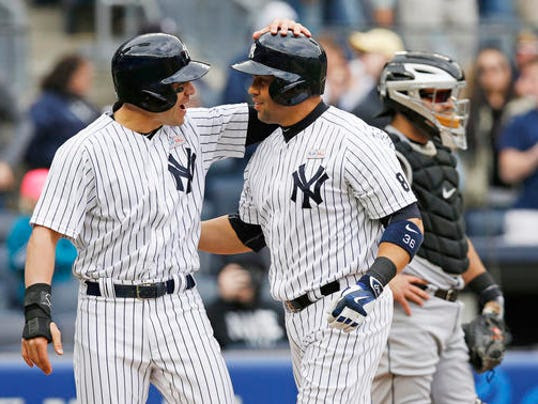 The Yankees came into this home weekend series against the American League Central Division-leading Chicago White Sox needing wins. Beating such a team would send a solid message -- to themselves, as well as to the rest of baseball.

But the pitching matchup for the Friday night game was not encouraging: Luis Severino was 0-5, and Chris Sale was 7-0. And Severino got hurt, and didn't get out of the 3rd inning, allowing 7 runs. He goes on the Disabled List.

Chase Headley hit a home run off Sale (there's an upset), his 2nd homer of the season, but that was it: Sale went the distance in a 7-1 ChiSox victory.

Hopefully, the care he gets for his injury will allow Sevy to return, and be as good as he was late late season. If he isn't, then the Yankees are in trouble.

The Yankees really needed a good pitching performance in the Saturday afternoon game, and Ivan Nova did his part, getting into the 6th inning, allowing just 1 run on 4 hits and a walk. The rest of the way, Dellin Betances, Andrew Miller and Aroldis Chapman allowed just 1 baserunner.

But Jose Quintana also pitched well for the Southsiders. Indeed, he had only 1 bad inning. But it was enough. With 2 outs in the bottom of the 2nd inning, he walked Headley. Cliche alert: Those walks'll kill you. Aaron Hicks nearly hit one out, and Headley scored on the double. Didi Gregorius singled, scoring Hicks.

This concerned me: So many times since late in the 2012 season, the bats have gone cold. This time, the pitching was just good enough to make what little the bats could do hold up. This is a very good sign.

Yesterday, it wasn't great pitching the Yankees needed, it was great hitting. Masahiro Tanaka did not get the job done, allowing 4 runs in only 5 innings, throwing 102 pitches. Not surprisingly, and justifiably this time, for reason that went beyond the pitch count, Joe Girardi went to the bullpen for the 6th inning, and Kirby Yates pitched a scoreless 6th.

But this time, the Yankee bats gave the arms something to worth with. Jacoby Ellsbury led off the bottom of the 1st inning with a single, Brett Gardner singled him over to 3rd base, and Carlos Beltran got him home with a sacrifice fly. In the 3rd, Gardner singled, Beltran and Mark Teixeira drew walks (neither of them intentional), Brian McCann popped up, Starling Castro singled to score Gardner and keep the bases loaded, and Dustin Ackley drew another walk to force home a run. Cliche alert: Those walks'll kill you. 3-2 Yankees.

The Pale Hose made it 4-3 in the 4th, but the Yankees struck again in the 6th. With 1 out, Ellsbury reached 1st on a throwing error by his former Boston teammate Brett Lawrie. Gardner's groundout got him to 2nd. And then Beltran hit a home run, his 8th of the season, and the 400th home run of his career, making it 5-4 Yankees.

Babe Ruth (659 of his 714), Mickey Mantle (all 536) and Lou Gehrig (all 493) are the only players to hit 400 home runs with the Yankees. Other players to have hit 400 home runs and played for the Yankees include Alex Rodriguez (the only one besides Ruth with 600 in his career, currently on the DL, but has resumed running), Reggie Jackson, Gary Sheffield (all with at least 500), Dave Winfield, Jose Canseco (wasn't a Yankee for long, thankfully), Jason Giambi, Alfonso Soriano, and now Beltran. Mark Teixeira has 397 and should join them before the end of the month.

Girardi sent Betances out for the 7th, and he blew the save, allowing a game-tying double to our old friend Melky Cabrera. But the Yankees got the run back when Gregorius drew a 2-out walk (cliche alert: Those'll kill you), and Headley, who seems have gone from 0 to 60 in a matter of days, doubled him home.

Yankees 7, White Sox 5. WP: Betances (1-2: While he was the current Yankee pitcher when they took a lead they never relinquished, it doesn't seem right for the win to go to a pitcher who's already blown a save.). SV: Chapman (3). LP: Matt Albers (1-2).

Headley has woken up. So has Beltran. A-Rod is coming back soon. Nova has been a pleasant surprise. Chapman has performed as advertised thus far. And we may have an explanation for Severino's struggles. All good news.

But Tanaka's struggles worry me: He's either brilliant or just not quite good enough.

So, 6 weeks into the 26-week MLB season, the Yankees are 16-20, still in last place in the AL Eastern Division, 7 games behind the Division-leading Baltimore Orioles. But we've won the last 2, and 7 of the last 10.

As Susan Sarandon used to say, before she went senile and started preferring Donald Trump to Hillary Clinton, "It's a long season, and you've got to trust it."

Also, the Mets have dropped 6 of their last 10.

The Yankees now head out on a Western roadtrip, visiting Phoenix for an Interleague series with the Arizona Diamondbacks, and the San Francisco Bay Area for a regular AL series with the Oakland Athletics.
Posted by Uncle Mike at 6:43 AM