The Yankees went into a 3-game series away to the Toronto Blue Jays last night, needing to show the defending American League Eastern Division Champions that they were ready to take back what is rightfully theirs, starting with the Division title.

It didn't happen. Ivan Nova fell behind 1-0 in the 1st inning, 3-0 after 3, and 4-0 after 5. Overall, he wasn't terrible, allowing 4 runs in 8 hits and just 1 walk over 6 innings. And, between them, Nick Goody and rookie reliever Richard Bleier pitched 2 perfect innings.

Maybe if the Yankees had backed Nova up with some runs, it would have made the difference. But they didn't. Jacoby Ellsbury led off the game with a single, and drew a walk in the 3rd. Carlos Beltran led off the 4th with a single. Starlin Castro led off the 5th with a walk. But none of them scored.

The Yankees didn't even seriously threaten until the 8th. Again, Castro led off with a walk. After Jays starter Marco Estrada, still in the game, struck out both Chase Headley and Didi Gregorius, Aaron Hicks doubled, but Castro could only get to 3rd base. Not the slightest bit rattled, Estrada got Ellsbury to pop up, ending the threat.

Aaron Loup came on to finish the game off. He hit Beltran with a pitch, and Brian McCann gave the Yankees some home with a home run, his 7th of the season. Drew Storen was brought in to relieve, and he allowed a double to Mark Teixeira -- a rare hit for him lately. Suddenly, with only 1 out, Castro was the tying run.

Can we have some early runs, Yankees? Please? Before we fall behind 4-0?

You can only win the Stanley Cup for the 1st time once. And only 1 man in your team's history can score your 1st-ever Stanley Cup-winning goal.

For the Philadelphia Flyers, that man was Rick MacLeish.

He was a member of their Stanley Cup-winning teams of 1973-74 and 1974-75, and led the team in scoring in the Playoffs both times. On May 19, 1974, in Game 6 of the Stanley Cup Finals at The Spectrum, Andre "Moose" Dupont fired a shot at Boston Bruins goalie Gilles Gilbert, and MacLeish redirected it and put it in the net. It was the only goal of the game, as the Flyers won 1-0, taking the series 4 games to 2, and becoming the 1st of the 1967 expansion teams to win the Cup. 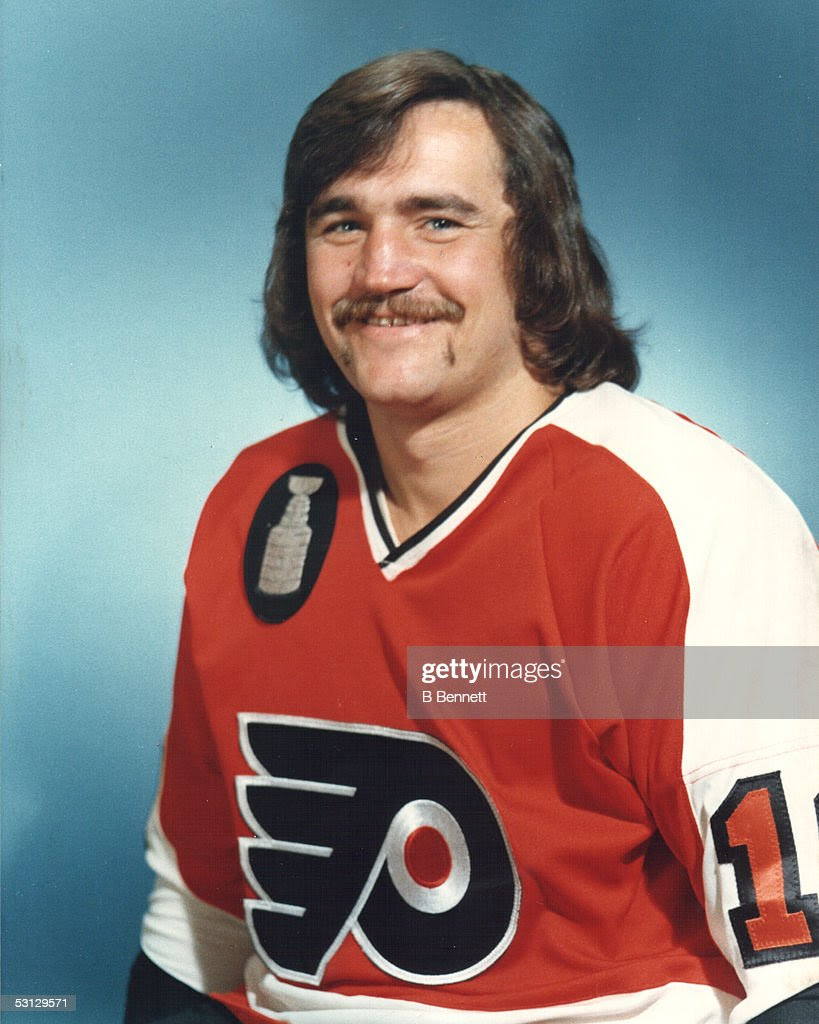 He had the hair, he had the mustache, he had the garish clothes.
All that's missing in this otherwise-perfect 1970s photo
is a mirror ball. A lava lamp would suffice.

The Flyers won the Cup again in 1975, beating the Buffalo Sabres in the 1st all-expansion Finals. Injuries kept MacLeish from playing in the next season's Playoffs, and the Flyers reached the Finals for the 3rd straight year, but the "Hat Trick in '76" was not to be, as they got swept by the Montreal Canadiens. They reached the Finals with MacLeish again in 1980, but lost to the New York Islanders.

He was traded to the Hartford Whalers in 1981, and to the Pittsburgh Penguins the next year. He briefly returned to the Flyers for the 1983-84 season, before being traded again, to the Detroit Red Wings, and he closed his career.

He owned and trained racehorses, and continued to play in old-timers' games, before suffering a heart attack in one. He developed diabetes, and died in a Philadelphia hospital yesterday, as meningitis led to kidney and liver failure. He was 66 years old.

UPDATE: His final resting place is not publicly known.
Posted by Uncle Mike at 7:06 PM