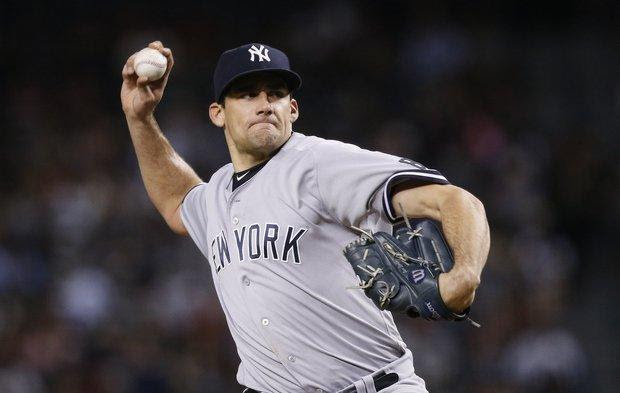 Ever since October 2001, the less said about the Yankees when they go to Phoenix to play the Arizona Diamondbacks, the better. So let me tell what happened in as brief a way as possible:

On Monday night, Chad Green a righthanded pitcher from South Carolina about to turn 25, made his 1st major league appearance, wearing Number 38. He got into the 5th inning, striking out 5 and walking only 1. But he allowed 6 runs (4 of them earned) on 8 hits. Nick Goody was no better.

Conor Mullee, a 28-year-old righthander from the Washington, D.C. suburbs, but a graduate of Jersey City's St. Peter's University, also made his big-league debut, wearing Number 50. He pitched the 6th inning, and allowed a run. And he was the best Yankee pitcher of the night. It's hard to be the worst when Phil Coke pitches, and Joe Girardi trusted him to pitch the rest of the way, and he allowed 4 runs in 2 innings.

On Tuesday night, Michael Pineda pitched poorly, allowing 5 runs in 5 innings. Chasen Shreve and Kirby Yates pitched 3 innings, allowing only 1 baserunner between them, which is encouraging. But it was too late.

Starlin Castro hit a home run, his 5th of the season. Otherwise, the Yankees had only 6 baserunners. The fact that Zack Greinke was pitching should have made no difference: With what the Yankees spend on hitters, they should be able to knock any pitcher out of the box.

There is now a rumor going around that the Yankees are fed up with Pineda, and may be looking to offload him.

Right: Pineda loses his job, but Girardi and Brian Cashman keep theirs? Something is wrong here.

Last night, it was Nathan Eovaldi to the rescue. Nasty Nate went 6 innings, allowing 1 run on 1 hit, no walks, 5 strikeouts.

This time, we got some runs. Brett Gardner hit his 5th home run of the season, Jacoby Ellsbury reached base 5 times (3 hits and 2 walks) including an RBI double, and the much-maligned Chase Headley got 2 hits.

The Yankees escaped from Arizona to the Bay Area with a record of 17-22, 7 games behind the Baltimore Orioles. As the late, great Yogi Berra might have said, it's getting a little late to be saying it's early.

Here are the projected starting pitchers for the Yanks' 4-game series away to the Oakland Athletics:

Come on you Bombers!
Posted by Uncle Mike at 4:25 PM