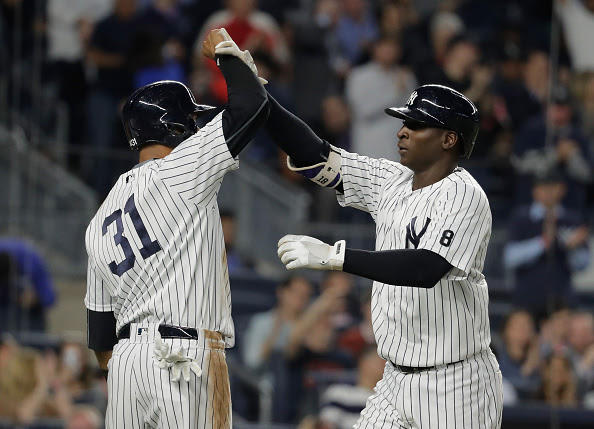 Sorry for slipping behind. Now I have to cram 4 games into 1 post. I've done it before, but I don't like it. At any rate...

Anybody who still says the Mets are better than the Yankees needs to stop calling me "delusional."

Last October, the Mets got beat 4 out of 5 by the Kansas City Royals in the World Series, including dropping 2 out of 3 in New York, and blowing leads in all 5 games, including the 1 they won.

The Yankees just took 3 out of 4 from the Royals.

On Monday night, K.C. came in, and Ivan Nova got the start in place of the injured CC Sabathia. He pitched decently through the 1st 4 innings, and the Yankees gave him a 5-1 cushion, thanks to home runs by Brian McCann (his 4th of the season), Brett Gardner (his 4th), Aaron Hicks (his 2nd), and 2 by Carlos Beltran (giving him 6).

But Nova allowed 1st & 3rd with only 1 out in the 5th. You would expect manager Joe Girardi to panic in this situation. Instead, he left Nova in to pitch to Lorenzo Cain, and Nova struck him out.

Then Girardi took him out. Why? Because the next batter was Eric Hosmer, who's a lefthanded hitter, and Girardi wanted a lefthanded pitcher to face him. So he brought in...

Seriously? I mean, blame Brian Cashman for signing the bum in the first place, but blame Joe Girardi for letting the bum into a game in the second place!

And Coke very nearly served up a gopher ball to Hosmer! To the opposite field, no less! But Gardner caught it at the wall.

Well, you would think that Girardi would know better than to let Phil Coke Is Not It throw another pitch as a Yankee, let alone in this game. But no, he leaves Phil Choke in. He gets Kendrys Morales to fly out, but he walks Alex Gordon. Why did he leave Coke in? Because Morales is a switch-hitter who's weaker from the right side, and Gordon is lefthanded.

Joe, if you can't trust Nova to get hitters out, regardless of handedness, why pitch him at all?

Joe brought Kirby Yates in, and he ended the threat. Then Yates went 1-2-3 in the 7th inning. Of course, a manager with any sense would leave him in. Instead, Girardi brings in Chasen Shreve, who can't fucking pitch, and he surrenders a homer to Hosmer. Even Phil Fucking Coke didn't do that!

Fortunately, a sacrifice fly by Hicks got the Yankees another run. And then, in the top of the 9th, the much-discussed Aroldis Chapman made his Yankee debut. Wearing Goose Gossage's old Number 54, which he wore with his previous team, the Cincinnati Reds, the man known as the Cuban Missile got 2 strikeouts, but allowed a double and a single. Perhaps he's a little rusty? After all, he didn't have spring training. But he got the last out.

On Tuesday night, Masahiro Tanaka did not have good stuff, allowing 6 runs in 7 innings. But the Yankees knocked Kris Medlen out in the 3rd inning, taking a 5-3 lead. But he fell behind 6-5 in the 5th. The Yankees made it 7-6 in the 7th, but Andrew Miller, the 8th inning guy now that Chapman is eligible, blew it, giving up a homer to Cain, his 3rd of the game!

But just as in Game 3 of the 1978 American League Championship Series, when George Brett did to us for the Royals, the Yankees got the winning runs in the 8th inning. With 1 out, Ben Gamel reached on an error by Royal shorstop Alcides Escobar. Brett Gardner doubled him home. Starlin Castro was hit by a pitch, and McCann doubled them home.

Hicks, one of several Yankees who got off to atrocious starts at the plate, got 3 hits. Beltran, another, got 2. The rest of the Yankees combine got only 2 hits and 3 walks, and left 8 men on base.

Thursday night felt like a key game. Lose it, and it would seem like the Yankees were once again falling into bad habits, as if the 1st 2 games in the series didn't matter. Win it, and you've taken 3 out of 4 from the Champions, which sends quite a message to the rest of the League.

It was Nathan Eovaldi, who looks like a big part of the Yankees' future, against Ian Kennedy, who was supposed to be, and now does have a World Series ring -- with the Royals.

Castro (his 4th) and Chase Headley (finally, his 1st) hit home runs, and the Yankees led 3-0 after 2 innings. The Royals closed to 3-2 in the 4th. Didi Gregorius got those runs back with a homer in the bottom half of the inning. But Eovaldi allowed another run in the 5th to make it 5-3 to the Bronx Bombers.

Apparently, Girardi's binder thought that Chapman needed a rest, but Yates, Betances and Miller didn't. And that the next-best option was Shreve.

Before I total it up, let me report that, when Royal manager Ned Yost pulled Ian Kennedy in the 7th, the reliever he brought in was our old friend Chien-Ming Wang. He couldn't work out of the jam, and the Yankees scored 2 runs in the inning, both charged to Kennedy.

As for the Mets, who lost to the Los Angeles Dodgers last night, with Bartolo Colon crashing back to Earth after his steroid-aided home run... I hope they took note of how the Yankees beat the Royals, which they couldn't do when it counted even more than this.

Records, schmecords: The Yankees are still better than the Mets.

* Tonight, 7:05 PM: Luis Severino (0-5) vs. Chris Sale (7-0). The only way we have a chance of defying those records is if Michael Kay mentions them on the air. You know "The Curse of Kay" has flipped overwhelming stats before.

Come on you Pinstripes!
Posted by Uncle Mike at 3:05 PM