T.S. Eliot Can Shut Up 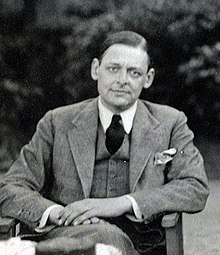 "April is the cruelest month, breeding lilacs out of the dead land, mixing memory and desire, stirring dull roots with spring rain."


T.S. Eliot wrote that in 1922. He titled the poem "The Waste Land." It has been called the greatest poem of the 20th Century.

The Yankees ended April 2016 in last place in the American League Eastern Division, at 8-14. Only Minnesota, Houston and Atlanta have lesser records.

The Red Sox scored 2 runs off Michael Pineda in the 2nd inning last night, and we already got the sense that the game was lost, because the Yankees simply haven't been hitting.

At the top of the order, Jacoby Ellsbury and Brett Gardner each went 0-for-4. Why do we have either of these guys in the lineup, if they can't get on base to provide potential RBIs for Mark Teixeira and Alex Rodriguez? Speaking of whom, each of those went 0-for-3, and was replaced for his final at-bat.

It's almost irrelevant that Pineda didn't have his good stuff again, and that Chasen Shreve and Johnny Barbato were horrible again: If Pineda had gone 7 innings, and allowed 1 run, and Dellin Betances and Andrew Miller had each added a perfect inning, we would have lost this game 1-0.

Of course, I want to beat the Red Sox. But, at this point, winning is important, never mind against whom.

T.S. Eliot can shut up: As any baseball fan, especially a Red Sox fan, can tell you, the cruelest month is October.

But you've got to get there first.

Maybe the Yankees should send out a Mayday?
Posted by Uncle Mike at 6:11 PM

Uncle Mike
Central New Jersey, where men are men, and the women also root for the Yankees., United States
Born in North Jersey. Raised in Central Jersey. Yankee Fan and Rutgers fan since 1977. Devils fan since they arrived in 1982. Arsenal fan since 2008. Former Nets fan, now an NBA free agent. No NFL team. Single, interested in changing that status. No children, but uncle to two teenage girl athletes and one in the making. Liberal Democrat and damn proud of it. Hopefully, in sports as well as politics, I can live up to the words of the late John Spencer on "The West Wing": "We are going to raise the level of debate in this country, and let that be our legacy."