May 6, 1931, 85 years ago today: Willie Howard Mays Jr. is born in Westfield, Alabama, outside Birmingham. He grows up in nearby Fairfield.

To people now under the age of 60, the New York Giants -- presuming you're talking about the old baseball team, not the still-operating football team named for them -- are the home run by Bobby Thomson that won the 1951 National League Pennant, and the catch by Willie Mays that sparked them to win the 1954 World Series. 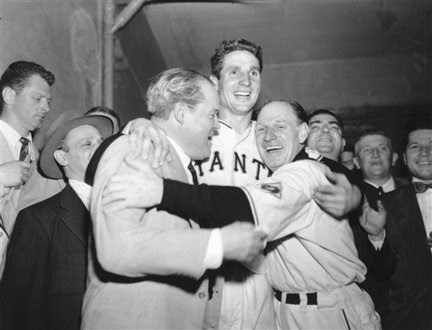 "The Giants win the Pennant!"

Even Dusty Rhodes, whose pinch-hit home run (with Mays on base) actually won Game 1 of the '54 Series, gets forgotten. And when Monte Irvin, a hero of the '51 and '54 Giants and a star in the Negro Leagues, died earlier this year, he was just a name to most current fans.

The San Francisco Giants have retired Terry's Number 3, Ott's 4, Hubbell's 11, Irvin's 20 and Mays' 24. And, since they were around before uniform numbers were worn, they have "NY" notations with the retired numbers for McGraw and Mathewson.

But time passes. It's been nearly 60 years since the Giants played home games in New York. The Polo Grounds last hosted an event on December 14, 1963, when the New York Jets lost an American Football League game to the Buffalo Bills, 19-10. The Mets clowned their way through the '62 and '63 season at the Polo Grounds. The old Harlem Horseshoe was demolished in April 1964, just as Shea Stadium was preparing for its opening.

As with the Brooklyn Dodgers, the Philadelphia Athletics, the St. Louis Browns and the Boston Braves, an era is slipping away.

And, unlike the Dodgers, who had Roger Kahn write The Boys of Summer and publish it in 1971 while most of the heroes of their 1950s teams were still alive, the Giants didn't get a literary celebration to cement their memory while the Baby Boomers, the last fans they would have, were still relatively young.

* Wayne Terwilliger, about to turn 91, from Clare, Michigan. A 2nd baseman, he served in the Marines in World War II. He debuted with the Cubs in 1949, and in 1951 was traded to the Dodgers along with Andy Pafko. The Dodgers sent him to the minors for the 1952 season, and he was claimed off waivers in 1953.

After being traded from the Cubs, he spent the rest of his career with teams that no longer exist in those forms: The Brooklyn Dodgers, the New York Giants, the Washington Senators and the Kansas City Athletics, with whom he played his last game, in 1960.

He became a longtime minor league manager and major league coach, and was on Tom Kelly's staff when the Minnesota Twins won the World Series in 1987 and 1991. He won an independent league's Pennant as manager of the revived Fort Worth Cats in 2005.

* Harvey Gentry, about to turn 90, from Winston-Salem, North Carolina. An outfielder, he made 5 appearances as a pinch-hitter for the Giants in April 1954, and was long gone before the World Series.

* Ron Samford, 86, from Dallas. A shortstop, he appeared in 12 games as a rookie with the 1954 Giants, but was not on the World Series roster. He appeared in the majors again with Detroit in 1955 and 1957, and with the Washington Senators in 1959. He hit a home run in his last major league at-bat.

* Billy Gardner, 88, from Waterford, New London County, Connecticut. A 2nd baseman, he played for 2 iconic New York baseball teams: The 1954 Giants and the 1961 Yankees. The Yankees acquired him that year from the Twins, with whom he had made the move as one of the last of the old Senators.

He managed the Twins from 1981 to 1985, and the Kansas City Royals in 1987. His son, Billy Gardner Jr., never made the majors, but is a longtime minor league manager, currently in the Washington Nationals' system.

* Johnny Antonelli, about to turn 86, from Rochester, New York. Also a surviving Boston Brave, he was one of the heroes' of the Giants' 1954 World Championship season, leading the NL in ERA, and remained with them through the move to San Francisco. A 6-time All-Star, he had a career record of 126-110.

* Pete Burnside, 85, from the Chicago suburb of Evanston, Illinois. A pitcher, he made scattered appearances for the Giants in the 1955, '57 and '58 seasons, closing his career with the 1963 Washington Senators.

* Gil Coan, about to turn 94, from Monroe, North Carolina. A left fielder, he was The Sporting News' Minor League Player of the Year in 1945, but was undistinguished in the majors for the Senators thereafter. He finished his career with the Giants in 1955 and '56.

* Albert "Red" Schoendienst, 93, from the St. Louis suburb of Germantown, Illinois. A 2nd baseman, he is the last survivor of the St. Louis Cardinals team that won the 1946 World Series. He stayed with the Cards until he was traded to  the Giants in 1956, but he was traded to the Milwaukee Braves and did not make the move to San Francisco. This was lucky for him, because he won another Series with the 1957 Braves, and another Pennant with them in 1958.

He managed the Cards to the 1967 World Series and another Pennant in 1968. He also won rings as a Cardinal coach in 1964 and 1982, and served as interim manager as recently as 1990. The Cardinals retired his Number 2. He is in the Hall of Fame, and 2016 is his 72nd consecutive season on an MLB team's payroll. As far as I know, that is a major league record.

* Ozzie Virgil, about to turn 84, from Monte Cristi, the Dominican Republic. How he didn't get the nickname "The Count of Monte Cristi," I don't know. The 1st Dominican national to play in the major leagues, even though he served in the U.S. Marine Corps during the Korean War. He debuted with the Giants in 1956, but was traded before the move.

In 1958, he became the 1st nonwhite player for the Detroit Tigers. He returned to the Giants in San Francisco in 1966, and remained through 1969. Mainly a 3rd baseman, he played all positions in major league games except pitcher and center field.

The airport in his hometown of Montecristi is named for him. His son, Ozzie Virgil Jr., was born in Puerto Rico while his father was playing winter ball there, and became a major league catcher, twice making the All-Star Game and appearing in the 1983 World Series with the Phillies.

* Jackie Brandt, about to turn 82, from Omaha. An outfielder, he debuted with the St. Louis Cardinals in 1956, and was soon traded to the Giants, remaining with them through the move, until 1959. A Gold Glove winner with the Giants, he was an All-Star with the Baltimore Orioles.

* Al Worthington, 87, from Birmingham. A pitcher, he arrived in the majors with the Giants in 1953, spent most of 1954 in the minors and thus missed the World Series, moved with the team, staying through 1959, and bounced around until arriving in Minnesota, helping the Twins win the 1965 American League Pennant and the 1969 AL Western Division title. He went 75-82 with 110 saves in his career.

He later served as head baseball coach at Jerry Falwell's Liberty University, and is a member of the Alabama Sports Hall of Fame. He should not be confused with the famous Los Angeles used car salesman Cal Worthington, and his dog Spot.

* Eddie Bressoud, about to turn 85, from Los Angeles. A shortstop, he arrived in 1956, stayed through the move until 1961, and later played for the Mets. Has been a longtime scout for the Los Angeles Angels.

* Joe Margoneri, 86, from the Pittsburgh suburb of Somerset, Pennsylvania. A pitcher, he went 7-7 for the Giants in 1956 and '57, for his only major league experience.

* Roy Wright, 82, from Buchtel, Ohio. A pitcher, he appeared in 1 major league game, on September 30, 1956. It was the last game of the season, he started against the Phillies, got rocked, didn't get out of the 3rd inning, lost, and stayed in the minors through 1959.

His baseball life was far from over. In 1971, he became the 1st black person to regularly broadcast a major league team's games, with the Yankees, joining Phil Rizzuto and Frank Messer. He remained with the Yankees through the 1988 season, until he was named President of the National League, serving until the Strike of '94. Why he hasn't been elected to the Baseball Hall of Fame, while he's still alive to appreciate it, is beyond me.

* Mike McCormick, 77, from the Los Angeles suburb of Pasadena, California. A pitcher, he debuted with the Giants in 1956, made the move with them, and lasted until the Pennant season of 1962. He was traded after the World Series, came back in 1967, and won the NL Cy Young Award that year. He pitched for the Yankees in 1970, and wrapped up his career with the Kansas City Royals in 1971. His career record was 134-128.

660 home runs. Over 3,000 hits. Hall of Fame. All-Century Team. Number 24 retired by Giants, unofficially retired by Mets. Regarded by many fans as the greatest player ever. And the last New York Giant still active, playing until 1973.

This past November, "the Say Hey Kid" was awarded the Presidential Medal of Freedom by President Barack Obama. 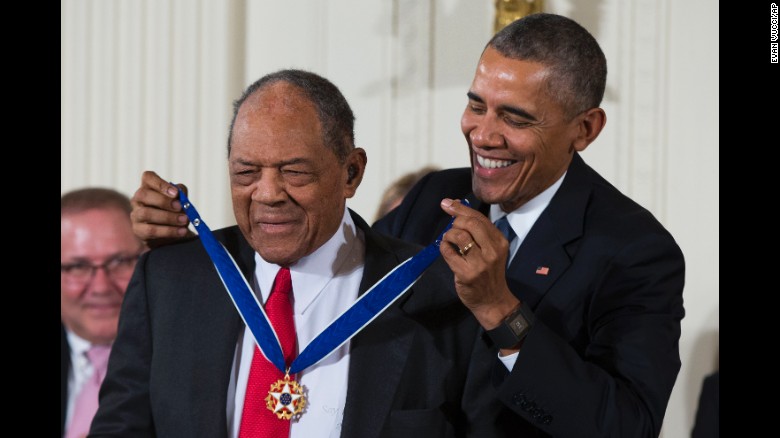 For the moment, Willie Mays is still a living treasure. And he is one of the last links to one of the greatest of all baseball teams, which is still in business, although not in the city where it first made its mark.