One Shot, One Kill, One Hit, One Win 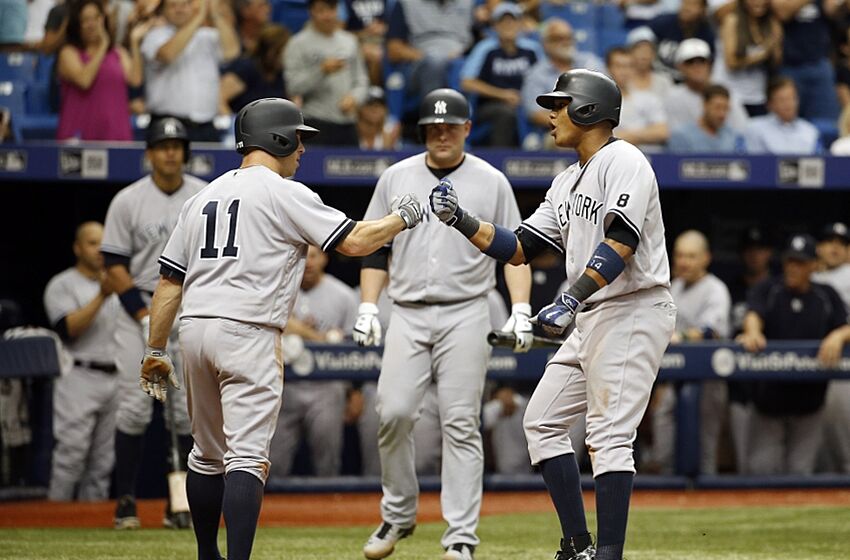 This morning, after I said words to the effect of, "The Mets are stupid" on Facebook, a Met fan suggested that I wished I were a Met fan instead of a Yankee Fan, because the Mets have "heart."

David Wright disappears every time the Mets need him most. Matt Harvey (who, in all fairness, pitched his best game of the season this afternoon) whined about an innings limit. And not since 1986 have the Mets gotten through a World Series without baserunning blunders.

A team with "heart" manages to find a way to win even when they are held to 1 hit.

That happened to the Yankees yesterday. Jake Odorizzi of the Tampa Bay Rays took a perfect game into the 6th inning, when Dustin Ackley reached 1st base on an error. He took a no-hitter into the 7th.

But with 1 out, Odorizzi walked Brett Gardner. And then Starlin Castro took him deep. That made the score Yankees 2, Rays 1, and that's how the game ended.

Technically, a home run hitter isn't a "baserunner," but gets counted as such. It was Castro's 7th home run of the season, and only the 3rd baserunner the Yankees got all game long. There would not be a 4th.

The Yankees have been faulted for poor hitting since the September 2012 nosedive that almost cost them the American League Eastern Division title, and did cost them the 2012 AL Championship Series, Playoff berths in 2013 and 2014, and the Division title and the Wild Card Game in 2015. This time, they got just enough to win.

It was like the motto of the U.S. Marine Corps' sniper service: "One Shot, One Kill." Fitting, on Memorial Day Weekend, the Yankees got "One Hit, One Win."

WP: Nathan Eovaldi (6-2). Each member of what's now being called "The Three-Headed Monster" pitched a perfect inning: Dellin Betances in the 7th, Andrew Miller in the 8th, and Aroldis Chapman in the 9th (for his 7th save). LP: Odorizzi (a hard-luck 2-3).

So, here we are, 8 weeks into the 26-game MLB regular season. Here are the AL East standings going into tonight's games, taking today's afternoon games into account:

The Yankees have played a game more than the Rays, and as many as the O's. They have 2 games in hand on The Scum, and 3 in hand on the Jays.

Tonight, the Yankees begin a 3-game series in Toronto against those pesky Blue Jays. Here are the projected pitching matchups, with all starting times officially listed as 7:07 PM:

* Tonight: Ivan Nova vs. Marco Estrada.
* Tomorrow: CC Sabathia vs. J.A. Happ. A lot of initials out there. They were on opposing sides in the 2009 World Series (CC for us, Happ for the Philadelphia Phillies).
* Wednesday: Tanaka vs. Aaron Sanchez.

Then the Yankees go to Detroit to make up a rainout on Thursday, then to Baltimore for 3 against the O's, before returning to New York to start a homestand by playing the Los Angeles Angels of Katella Boulevard, Anaheim, Orange County, California, United States of America, North America, Western Hemisphere, Planet Earth, Sol System, Alpha Quadrant, United Federation of Planets, Milky Way Galaxy, Local Group of Galaxies, Known Universe.

Hours until the U.S. national soccer team plays again: 99. See the next entry.

Days until the 2016 Copa America Centenario kicks off in the U.S.: 4, this Friday. The Copa America is celebrating its 100th Anniversary by being hosted on U.S. soil for the 1st time. (The U.S. normally wouldn't compete, and nor would our arch-rivals, Mexico: It's traditionally the continental tournament for national teams in South America. The U.S. team beat Bolivia 4-0 in their final warmup match. They will play Colombia on Friday night, at 9:30 PM Eastern Time, at Levi's Stadium in Santa Clara, the new home of the San Francisco 49ers. At 8:00 PM the following Tuesday, they will play Costa Rica at the new Soldier Field in Chicago. The following Saturday at 7:00 PM, they will play Paraguay at Lincoln Financial Field in Philadelphia. The Final will be at the Meadowlands on June 26.

Days until Euro 2016 kicks off in France: 11, a week from this coming Friday.

Days until the New York Red Bulls play again: 20, on Sunday night, June 19, at 7:30, home to the Seattle Sounders. This is after a break for the Copa America. In their last match, Metro cruised to a 3-0 win over Toronto FC.

Days until the next Yankees-Red Sox series of the season: 46, on Friday, July 15, the 1st series after the All-Star Break, at Yankee Stadium II. A little over 6 weeks.

Days until the Red Bulls next play a "derby": 48, against the Philadelphia Union at Talen Energy Stadium (formerly PPL Park) in Chester, Pennsylvania. The next game against New York City F.C. (a.k.a. Man City NYC, Man City III, Small Club In Da Bronx and The Homeless) is on Sunday afternoon, July 3, at Yankee Stadium II -- although after the greatest humiliation any MLS team has ever endured, that 7-0 defeat in The Bronx last weekend, I wonder if NYCFC (now 0-4 all-time against RBNY) will even want to show up. The next game against D.C. United (a.k.a. The DC Scum) is on Sunday night, August 21, at Robert F. Kennedy Stadium in Washington. The next game against the New England Revolution is on Sunday night, August 28, at Red Bull Arena in Harrison, New Jersey.

Days until The Arsenal play at the opponents in the 2016 Major League Soccer All-Star Game: 59, on Thursday night, July 28, at Avaya Stadium in San Jose, California, home of the San Jose Earthquakes. Under 2 months. Three days later, The Arsenal will play C.D. Guadalajara (a.k.a. Chivas), one of the biggest clubs in Mexico, at the StubHub Center, home of the Los Angeles Galaxy, in Carson, California. This will be just 2 years after The Arsenal came to America to play the Red Bulls in New Jersey. I was lucky enough to get a ticket and attend that match. I don't think I'll be going to either of these: Even if I could get a game ticket, paying for a plane ticket would be tough.

Days until The Arsenal play another competitive match: At least 68. The 2016-17 Premier League season is likely to open on Saturday, August 6 -- not on August 20, as I had previously been led to believe. However, Arsenal's opening League game could be delayed to Sunday the 7th, or Monday the 8th. Under 10 weeks.

Days until Rutgers University plays football again: 96, on Saturday, September 3, away to the University of Washington, in Seattle.

Days until East Brunswick High School plays football again: 102, on Friday, September 9, probably away, since, while the 2016 schedule hasn't been released yet, the Big Green opened last season at home.

Days until the New Jersey Devils play another local rival: Unknown, but at least 130. The schedule for the 2016-17 NHL season has been announced as being released on June 22. The new season is likely to begin on the 1st Friday in October, which would be October 7. But the Devils are not likely to play either the New York Rangers (a.k.a. The Scum), the New York Islanders or the Philadelphia Flyers (a.k.a. The Philth) in the opener.

Days until the next East Brunswick-Old Bridge Thanksgiving game: 168, on Thursday morning, November 24, at the purple shit pit on Route 9. Just 6 months.

Days until the Contract From Hell runs out, and Alex Rodriguez' alleged retirement becomes official: 519, on October 31, 2017, or at the conclusion of the 2017 World Series, if the Yankees make it, whichever comes last. A little over 17 months.

Days until the next World Cup kicks off in Russia: 745, on June 14, 2018. A little over 2 years. The U.S. team will probably qualify for it, but with Jurgen Klinsmann as manager, particularly in competitive matches rather than in friendlies, you never know.
Posted by Uncle Mike at 6:46 PM