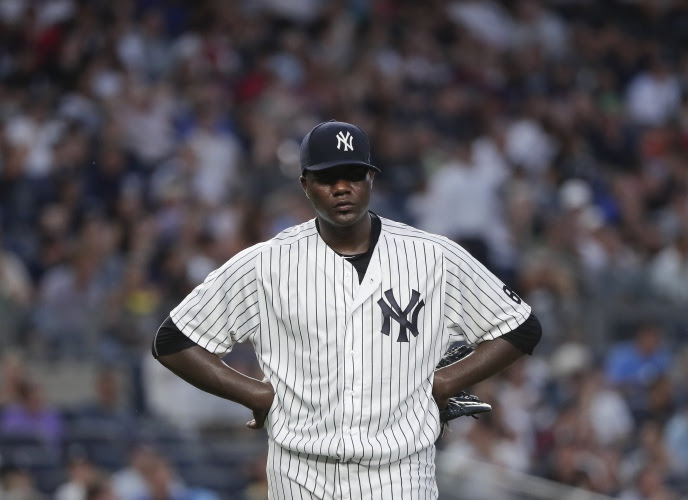 Last night, the Yankees opened the cultural, if not the numerical, 2nd half of the Major League Baseball regular season, home to the old enemy, the Boston Red Sox. Beating The Scum is a good way to get yourself on a good run toward the Playoffs.

It didn't happen, because, as the late great George Steinbrenner would have said, Michael Pineda spit the bit. He went just 5 innings, plus 2 batters into the 6th, allowing 5 runs on 5 hits. Only 1 walk, but that was the only encouraging sign from him. He wasn't showing bad control, he just threw pitches right where the Sox wanted them, and they hit them.

To be fair, the bullpen did well: Between them, Chasen Shreve, Nick Goody, Nathan Eovaldi and Aroldis Chapman pitched 4 innings, allowing 3 hits and 3 walks, but no runs.

It was 5-0 Sox going into the bottom of the 6th. Knuckleball pitcher Steven Wright -- no relation to the standup comedian of the same name, although the comedian is a Massachusetts native and a Red Sox fan -- had a perfect game going until 2 outs in the bottom of the 5th, when Alex Rodriguez broke up the perfect game and the no-hitter with grounder back to Wright that, despite turning 41 in a few days, managed to beat out for an infield single. But Didi Gregorius popped up to strand him.

But Wright began to lose it in the 6th. Starlin Castro led off with a single. Wright hit Chase Headley with a pitch -- and, unlike many other situations since 1998, nobody thought that this Red Sox pitcher hit a Yankee batter on purpose. Wright got Brett Gardner to fly out, but he walked Jacoby Ellsbury to load the bases. Carlos Beltran singled home Castro and Headley, and a Brian McCann forceout brought Ellsbury home. A popup by Mark Teixeira ended the inning.

Usually, against the Sox, knowing their bullpen and ours, I'm comfortable if I can get through the 6th inning trailing by 2 runs or less -- as our broadcaster John Sterling would say, a 2-run deficit can be erased by "just a bloop and a blast." Or a walk and a wallop.

Not a good way to start the 2nd half.

The series continues this afternoon. CC Sabathia starts for the Good Guys, Eduardo Rodriguez for The Scum.

Nate Thurmond died today after a battle with leukemia. The Basketball Hall-of-Famer was just short of 75 years old. 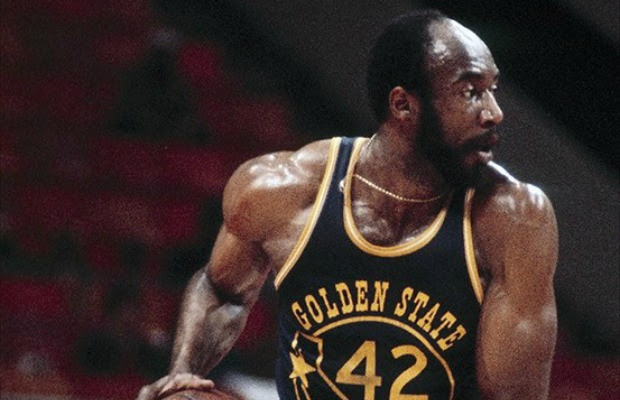 Nathaniel Thurmond (no middle name) was born on July 25, 1941 in Akron, Ohio, near Cleveland -- the same hometown as LeBron James. He went to Akron Central High School, where he was a teammate of another eventual Hall-of-Famer, dunk master Gus Johnson. They reached the State Playoffs, but were eliminated by Middletown, which featured yet another Hall-of-Famer, Jerry Lucas.

Ohio State wanted him, but they already had Lucas, and he didn't want to be a backup. He did stay in Ohio, going to Bowling Green State University, and was an All-American in 1963. The team then known as the San Francisco Warriors drafted him. When he arrived at the Cow Palace, he became a backup, to the greatest basketball player who ever lived, Wilt Chamberlain. But the Warriors traded Wilt to his hometown Philadelphia 76ers (the Warriors had been in Philly until 1962, and the Syracuse Nationals moved to become the Sixers a year later), so Thurmond was able to start.

He became a 7-time All-Star, one of the greatest defensive centers ever, earning him the nickname Nate the Great. Chamberlain called him one of the best centers he ever played against. Kareem Abdul-Jabbar called him his toughest opponent. In 1966-67, a year in which he took the Warriors into the NBA Finals (but lost to Wilt and the 76ers), he averaged 21.3 rebounds per game. In 1967-68, he averaged 22.0. Only Wilt and Bill Russell have ever topped that. No, LeBron has never done that. Nor did Kareem. Nor did Lucas or Dennis Rodman, each of whose main thing was rebounding.

Nate is 1 of 5 players to average at least 15 rebounds a game for a career: The others are Wilt, Russell, Lucas and Bob Pettit. The same 5 guys are also the only ones to average at least 20 rebounds per game for a season. Nate, Wilt, Russell and Lucas are the only players to have at least 40 rebounds in a game: Nate did it against the Detroit Pistons on November 9, 1965. (He was lights-out that night. Speaking of which, that was also the night of the great Northeast blackout.)

But, except for 1967, the Warriors were unable to get past the Los Angeles Lakers (who got Wilt in 1968) or the Milwaukee Bucks (who drafted Kareem, then still known as Lew Alcindor, a year later) for the NBA Western Conference Championship. Between them, the Lakers and the Bucks won the West every season from 1968 to 1974 -- except for the Warriors in '64 (Nate's 1st season) and '67, every season from 1962 to 1974. The move to Oakland, and the change of name to "Golden State Warriors," for the 1971-72 season didn't help.

Before the 1974-75 season, the Warriors traded Nate to the Chicago Bulls for Clifford Ray. On October 18, 1974, the Bulls opened the season by beating the Atlanta Hawks 120-115 in overtime. In his debut for the club, Nate played 45 of the 53 minutes, and scored 22 points, grabbed 14 rebounds, made 13 assists, and blocked 12 shots. This was the 1st "quadruple-double" in the NBA's 28-year history to that point.

Since then, it's been done by only 3 other players: Alvin Robertson, Hakeem Olajuwon and David Robinson. No, Wilt never did it. Nor did Russell, nor Kareem, nor Bill Walton, nor Robert Parish, nor Moses Malone, nor Shaquille O'Neal, nor Tim Duncan, nor LeBron, nor any of the NBA's other legendary big men.

Nate helped the Bulls win their 1st Division title... but Lady Luck proved to be a harsh mistress, because that was the season the Warriors' finally won their 1st title in the Bay Area. (They'd previously won in Philly in 1947 and 1956.)

The Bulls traded Nate to the Cleveland Cavaliers early the next season. The Cavs, expanded into existence in 1970, hadn't yet made the Playoffs. But when Jim Chones went down with an injury, Nate, 34, stepped up, and carried them on his back.

Bad uniforms are a tradition in Cleveland.

Also featuring Austin Carr, Robert "Bingo" Smith, Clarence "Foots" Walker and Butch Beard (who had been with the title-winning Warriors the season before), the Cavs won 49 games, took their 1st Division title, and, in a thriller of a Game 7 at the suburban Coliseum, beating the defending NBA Eastern Conference Champion Washington Bullets 87-85, a game known as the Miracle of Richfield, and the Cavs' greatest moment until last month. But they couldn't get past the Boston Celtics in the Eastern Conference Finals.

Nate played 1 more season, and retired. He moved back to San Francisco, opened a restaurant named Big Nate's BBQ, broadcast for the Warriors, and the team gave him the title "Warriors Legend & Ambassador." He was invited to ride in their 2015 title parade. 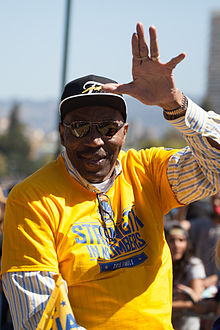 He was elected to the Basketball Hall of Fame and the Bay Area Sports Hall of Fame, and in 1996 he was named one of the NBA's 50th Anniversary 50 Greatest Players. (49 of the 50, all but Pete Maravich, were still alive then. 41 of the 50 are still alive now.) The Warriors and the Cavaliers have both retired Thurmond's Number 42. This means he has the distinction of having his uniform number retired by the teams that have faced each other in the last 2 NBA Finals.