So Far, Since the Trade, So Good 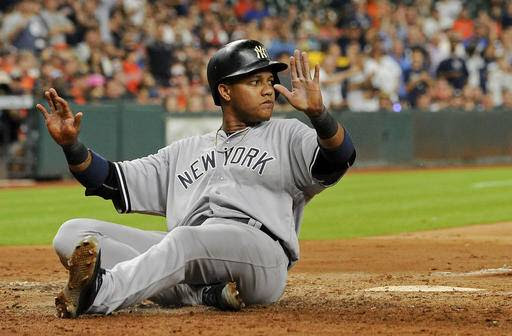 The Yankees are now 3-0 since they made what I thought was a horrible trade: Aroldis Chapman for Adam Warren and 3 prospects.

In fact, they're on what Star Trek fans might call a Borg winning streak: Seven of Nine.

CC Sabathia took the hill for the Bronx Bombers against the Houston Astros at Minute Maid Park last night, and the Big Fella may well have his groove back. In fact, manager Joe Girardi yet again realized that having a pitching hole in the 7th inning could, indeed, be filled by -- brace yourself -- your starting pitcher. He let CC pitch into the 7th, allowing 2 runs on 4 hits and 2 walks.

CC got a lead because of a Didi Gregorius sacrifice fly and a Chase Headley single in the 2nd, a Starlin Castro single in the 3rd,and a Headley sac fly and an Aaron Hicks triple in the 5th. Anthony Swarzak was the 7th inning man again, and also pitched into the 8th, with Dellin Betances getting the last out. Andrew Miller pitched a scoreless 9th.

The series concludes tonight. Masahiro Tanaka starts against Lance McCullers. You might remember his father, Lance Sr., pitching for the Yankees in 1989 and '90.

Hours until The Arsenal play as the opponents in the 2016 Major League Soccer All-Star Game: 25, tomorrow night, at Avaya Stadium in San Jose, California, home of the San Jose Earthquakes. Just 3 weeks. Three days later, The Arsenal will play C.D. Guadalajara (a.k.a. Chivas), one of the biggest clubs in Mexico, at the StubHub Center, home of the Los Angeles Galaxy, in suburban Carson, California. This will be just 2 years after The Arsenal came to America to play the Red Bulls in New Jersey. I was lucky enough to get a ticket and attend that match. I will not be going this time. And, because of the timing of these games, The Arsenal will not host the preseason Emirates Cup this year. (They'd held it every year since 2007, except for 2012, canceling it due to the Olympics causing havoc with London's infrastructure.)

Days until the New York Red Bulls play again: 4, this Sunday night at 7:00 PM Eastern Time, away to the Chicago Fire.

Days until the 2016 Olympics begin in Rio de Janeiro, Brazil: 9, a week from this Friday, August 5.

Days until the next Yankees-Red Sox series: 13, on Tuesday, August 9, at Fenway Park. Under 2 weeks.Days until The Arsenal play another competitive match: 18, on Sunday, August 14, home to Liverpool.

Days until the Red Bulls next play a "derby" (after tonight's game, that is): 25, against D.C. United on Sunday night, August 21, at Robert F. Kennedy Stadium in Washington. The next game against the New England Revolution is on Sunday night, August 28, at Red Bull Arena. The next game against the Philadelphia Union is on Saturday night, October 1, at Red Bull Arena. There are no further games this regular season against New York City FC, although Metro could face them in the MLS Cup Playoffs.

Days until the U.S. national soccer team plays again: 37, on Friday, September 2, in a CONCACAF Qualifying Match for the 2018 World Cup, away to St. Vincent & the Grenadines. A little over 5 weeks. They should win, especially since they took on the best that Latin America had to offer in the Copa America, and reached the Semifinals before being knocked out by Argentina. This will be followed 4 days later by another Qualifier, at EverBank Field, home of the NFL's Jacksonville Jaguars.Days until Rutgers University plays football again: 38, on Saturday, September 3, away to the University of Washington, in Seattle.Days until East Brunswick High School plays football again: 44, on Friday, September 9, probably away, since, while the 2016 schedule hasn't been released yet, the Big Green opened last season at home. A little over 6 weeks.Days until the New Jersey Devils play again: 78, on Thursday night, October 13, away to the Florida Panthers in the Miami suburb of Sunrise. Just 11 weeks. The home opener is 5 days later, on Tuesday night, October 18, against the Anaheim Ducks.Days until the 2016 Presidential election: 104, on Tuesday, November 8. That's a little over 3 months. Make sure you are registered to vote, and then make sure you vote!Days until the next East Brunswick-Old Bridge Thanksgiving game: 120, on Thursday morning, November 24, at the purple shit pit on Route 9. Just 4 months.Days until the New Jersey Devils play another local rival: 137. Their 1st game this season with the New York Rangers will be on Sunday night, December 11, at Madison Square Garden. Their 1st game this season with the Philadelphia Flyers will be on Thursday night, December 22, at the Prudential Center. By a quirk in the schedule, the New York Islanders, a team they usually play several times a season, don't show up on the slate until Saturday night, February 18, 2017, at the Prudential Center.Days until The Contract From Hell runs out, and Alex Rodriguez' alleged retirement becomes official as far as the Yankees are concerned: 461, on October 31, 2017 -- or at the conclusion of the 2017 World Series, if the Yankees make it, whichever comes last. About 15 months, unless Yankee management finally decides that they've had enough of his sorry ass and buys him out.Days until the next World Cup kicks off in Russia: 687, on June 14, 2018. A little under 23 months. The U.S. team will probably qualify for it, but with Jurgen Klinsmann as manager, particularly in competitive matches such as World Cup Qualifiers, rather than in friendlies, you never know.
Posted by Uncle Mike at 7:52 PM