After Further Review, Maybe the Yankees Have a Chance 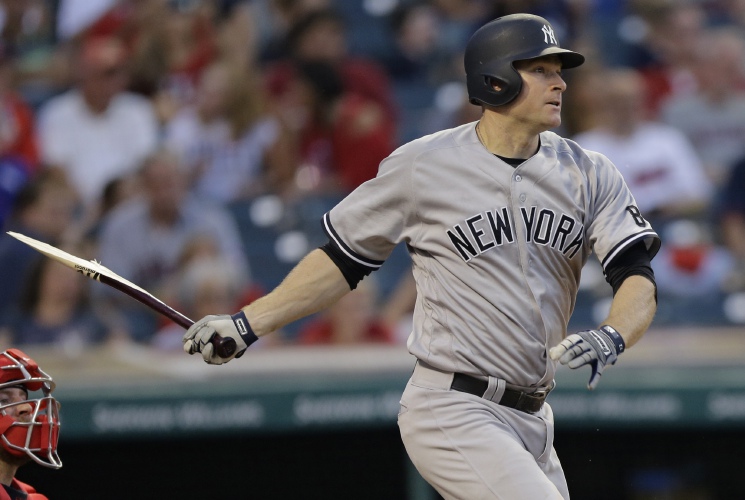 The Yankees started a 4-game series against the Cleveland Indians at Progressive Field last night, and they badly needed a win.

Ivan Nova fell 2-0 behind in the bottom of the 3rd inning, but settled down after that, allowing a total of 4 runs on 5 hits, but no walks, in 5 1/3rd innings. After that, No Runs DMC took over: Dellin Betances got the last 2 outs in the 6th and all 3 in the 7th, Andrew Miller pitched a perfect 8th, and Aroldis Chapman took the mound for the 9th.

But you gotta score. Didi Gregorius hit a home run in the top of the 5th. This was followed by singles by Chase Headley and Rob Refsnyder, a popup by Jacoby Ellsbury, and a game-tying single by Brett Gardner.

In the top of the 6th, Starlin Castro and Gregorius singled, and then Headley did so, and Castro tried to score. He was called out. But Joe Girardi challenged the call, and, after further review, the video replay showed that both Castro's foot and hand touched the plate before the tag was put on him. 3-2 Yankees.

But in the bottom of the inning, Nova faltered, and it was 5-4 before Girardi brought Betances in an inning earlier than he'd hoped.

In the 9th, Chapman came on for the save, but he did the one thing you never want to do in that situation: He walked the leadoff man, former Red Sox pain in the ass Mike Napoli. He got a strikeout, but allowed a single to Juan Uribe.

Now, the tying and winning runs were on. He got a lineout, but Tyler Naquin grounded to Mark Teixeira at 1st base, and Teix mishandled it. It went to Castro, who threw to Chapman for the last out, but Naquin was ruled safe. Bases loaded, 2 out.

Girardi challenged again. Again, the replay shows that the initial call was wrong: Chapman's foot was on the bag when he got the ball.

As bad as they looked in the 1st half of this season, maybe the Yankees have a chance at the Playoffs after all.

The series continues tonight. Chad Green starts for the Bronx Bombers, Corey Kluber for the Tribe.
Posted by Uncle Mike at 6:32 PM