How Long It's Been: The Yankees Were Under .500 After the All-Star Break 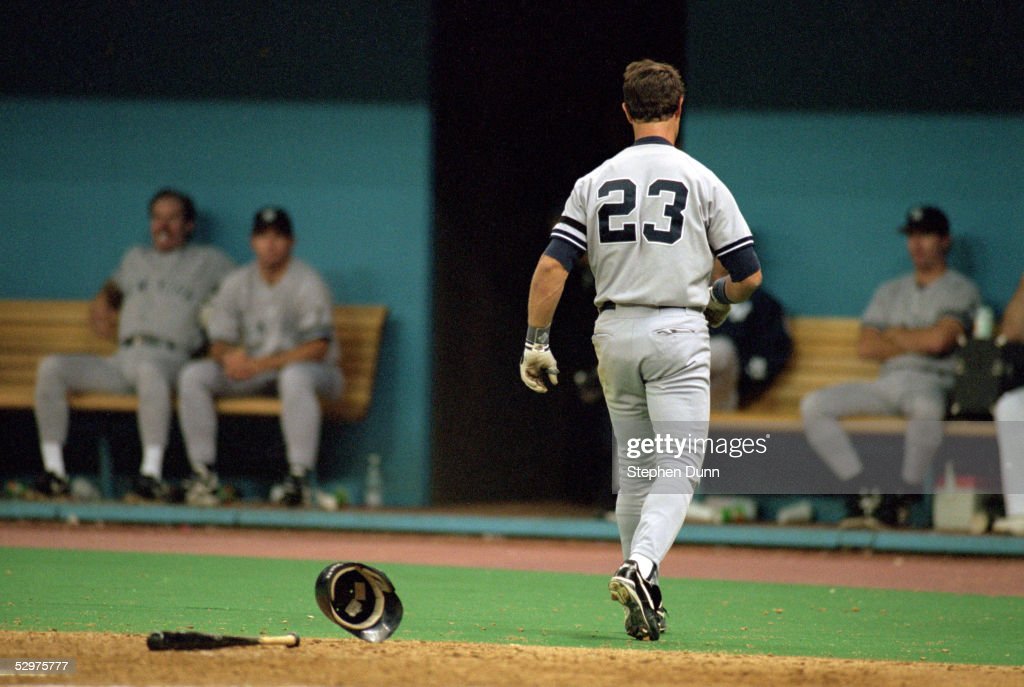 Last night, the Yankees lost to the Boston Red Sox, 5-3 at Yankee Stadium.

This is bad news for many reasons. One is that the result dropped the Yankees to 44-45. This is the 1st time the Yankees have had a sub-.500 record after the All-Star Break since September 6, 1995. That day -- also the day that Cal Ripken broke Lou Gehrig's record of 2,130 consecutive games played -- they entered the day 60-61, before beating the Seattle Mariners 4-3 at the old Yankee Stadium.

It was a Wednesday night in New York, between 2 teams that would go on to make the Playoffs, and the 2nd year of Mayor Rudy Giuliani's crackdown on crime. Nevertheless, the Yankees were below .500, it was a weeknight, and what drop there had been in crime really hadn't yet been reflected in the Yankees' attendance. Only 15,426 fans came out -- fewer than could have been expected to go to a Knicks, Rangers or Devils game at that point (had they been in season).

Jack McDowell, the ace of the good Chicago White Sox teams of the 1st half of the decade, started for the Yankees, and... went the distance. The Yankee manager was not Joe Girardi or Joe Torre, but Buck Showalter. No home runs were hit.

By the time the Yankees won the World Series a little more than a year later, only Boggs, Bernie and O'Neill would be in the starting lineup -- and even Boggs didn't play in the clincher. (Charlie Hayes was the 3rd baseman, and caught the last out.) Showalter was out as manager, and Torre was in. And, of course, 2 of the Mariners who played in this game would be key Yankees: 1st baseman Tino Martinez and relief pitcher Jeff Nelson.

The White Sox hadn't won the World Series in 78 years. The Red Sox, 77. The Giants, 41, or since moving to San Francisco. The Braves, 38, or since moving to Atlanta. The Yankees, 17, a pretty big drought by their standards. The Florida Marlins, the team then known as the California Angels, and the Arizona Diamondbacks had yet to win their 1st World Series. The Marlins, the Angels, the Diamondbacks, the Houston Astros, the Colorado Rockies, the Tampa Bay Rays and the Texas Rangers, had yet to win their 1st Pennants. The Diamondbacks and Rays did not yet even exist, and the Washington Nationals were still the Montreal Expos. None of those facts is true anymore.

Games on what used to be known as "free TV" were still common, but are now rare. Toronto had the only MLB stadium with a retractable room. Hideo Nomo had just become the 1st star Asian player in MLB.

Derek Jeter and Alex Rodriguez were rookies, in the opposing dugouts. David Arias was in the Mariners' organization, and had not yet become David Ortiz or a big fat lying cheating bastard. Jimmy Rollins, Matt Holliday, Albert Pujols and Jose Bautista were in high school. David Wright, Justin Verlander and Miguel Cabrera were in junior high.

Zack Greinke, Alex Gordon and Max Scherzer were 11 years old; Daniel Murphy was 10; Yoenis Cespedes and Felix Hernandez were 9, Andrew McCutchen and Buster Posey were 8, Clayton Kershaw was 7, Matt Harvey and Madison Bumgarner were 6, Mike Trout was 4, Kris Bryant was 3, Bryce Harper was 2, and Carlos Correa was about to have his 1st birthday. Julio Urias, a 19-year-old lefthanded pitcher from Mexico who made his major league debut for the Los Angeles Dodgers this past May -- and, in so doing, wore Number 84, making that the last uniform number under 100 that no player had yet worn in a regular-season game -- wasn't born yet.

The Olympic Games have been held in America (twice), Japan, Australia, Greece, Italy, China and Canada. The World Cup has been held in France, Japan, Korea, Germany and South Africa -- and had never previously been held in Asia and Africa, or in a joint venture (2002 in Japan and Korea).

The defending World Champions were… well, officially, the Toronto Blue Jays, but technically nobody, since there was no 1994 World Series. The other Canadian-based team, the Montreal Expos, should have been a contender for that Series, but have since moved. The defending World Champions in the other sports were the San Francisco 49ers, the Houston Rockets and, yes, the New Jersey Devils. The Heavyweight Champion of the World was... well, the WBA said Bruce Seldon, the WBC said Frank Bruno, the WBO said Riddick Bowe, and the IBF title was officially vacant, for reasons that are too stupid to get into here.

Most Clevelanders hadn't yet realized what a jackass Art Modell is, nor had most of them heard of LeBron James.

Bill Clinton was in his 1st term as President. Hillary Clinton was First Lady. Donald Trump was married to Marla Maples. George W. Bush was in his 1st year as Governor of Texas. George H.W. Bush, Ronald Reagan, Jimmy Carter, Gerald Ford and their wives, and Lady Bird Johnson were all still alive. (Reagan, Mrs. Johnson, and Mr. and Mrs. Ford have since died.) Barack Obama was teaching constitutional law at the University of Chicago, and Mitt Romney had just lost his first race for public office, for the U.S. Senate seat of Ted Kennedy of Massachusetts.

The current holders of the Nobel Peace Prize were Yitzhak Rabin, Shimon Peres and Yasser Arafat. Yeah, how did that work out? The Pope was John Paul II. The Prime Ministers of Canada was Jean Chretien, and of Britain John Major. The monarch of Britain was Queen Elizabeth II -- that hasn't changed. Blackburn Rovers were the holders of the Premier League title, and Everton of the FA Cup. Blackburn aren't even in the Premier League, or even the Championship, anymore.

Major novels of 1995 included The Horse Whisperer by Nicholas Evans, Independence Day by Richard Ford, The Rainmaker by John Grisham, High Fidelity by Nick Hornby and Angela's Ashes by Frank McCourt. Timothy Findley published a novel titled The Piano Man's Daughter. It was not about Alexa Ray Joel.

Nick Hornby, the Arsenal fan who made Arsenal fandom cool for the first time since the early 1970s with Fever Pitch, published High Fidelity. Frank McCourt published Angela's Ashes. Memoirs were published by Nelson Mandela (Long Walk to Freedom) and Leonard Nimoy (I Am Spock -- a sequel to his controversial 1975 memoir I Am Not Spock).

None of the Harry Potter, A Song of Ice and Fire/Game of Thrones, Twilight or Hunger Games novels had yet been published. No one had ever heard of Rick Grimes, Robert Langdon or Lisbeth Salander

Major films of the late Summer of 1995 included Dangerous Minds, The Usual Suspects, Desperado, Clockers, and To Wong Foo, Thanks for Everything! Julie Newmar. Pierce Brosnan was about to debut as James Bond in GoldenEye, Dean Cain was playing Superman on TV, Val Kilmer Batman in the movies, and there still hadn't been a Doctor Who since Sylvester McCoy in 1989. TV shows about to premiere included The Drew Carey Show, Caroline in the City, JAG, MadTV, and the cartoons Pinky and the Brain, Earthworm Jim, Freakazoid! and Sailor Moon.

A song from Dangerous Minds, "Gangsta's Paradise" by Coolio featuring L.V., was the Number 1 song in America. The Rock and Roll Hall of Fame finally opened its museum in Cleveland. Major novels of 1995 that were later turned into movies included The Horse Whisperer, High Fidelity and Angela's Ashes. None of the Harry Potter or A Song of Ice and Fire novels had yet been published.

The Internet was still new to most of us. Most of us had never heard of Microsoft or Netscape or America Online. There was no Facebook (or even MySpace), no YouTube, no Twitter, no Instagram, no Pinterest, no Wikipedia, no Skype, no Tumblr, no Vine. VHS videotapes were still the dominant way of recording and playing back movies and TV shows. Mobile phones were still roughly the size of the communicators on Star Trek. There were no tablet computers, no iPods, no iPads, no iPhones. The original Sony PlayStation was the leading home video game system of the time. There were birth control pills, but no Viagra.

In the late Summer of 1995, NATO forces pounded Bosnian Serb-held locations, forcing an end to the nasty Yugoslav Civil War and the Bosnian genocide. The Russell Hill subway accident killed 3 people in Toronto. The New York Times and The Washington Post published the Unabomber's manifesto. eBay was founded. The DVD was introduced to the public. Microsoft released Windows 95. And the O.J. Simpson trial inched toward a verdict.

September 6, 1995. The New York Yankees entered a game day after the All-Star Break with a record below .500.

Now, it has happened again. Let's hope this doesn't become a trend.