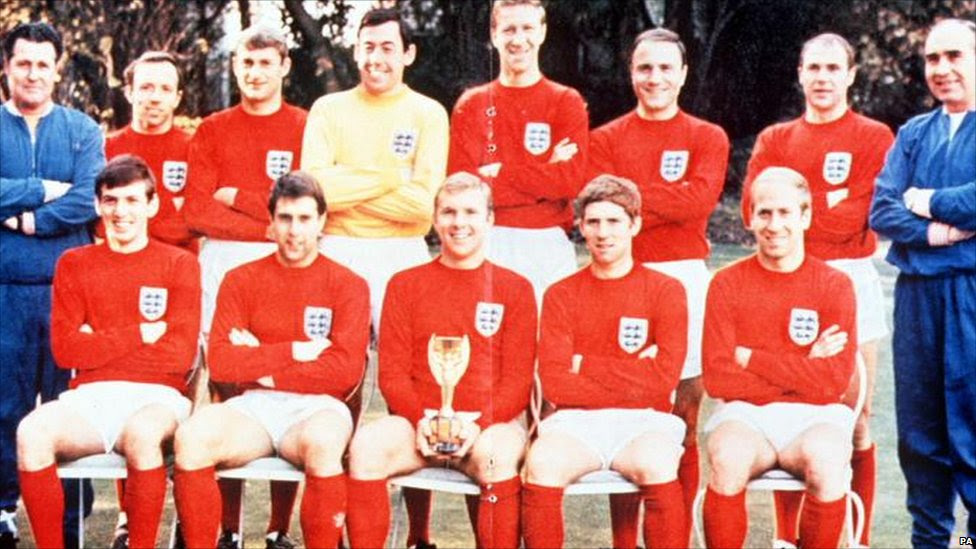 July 11, 1966, 50 years ago: The World Cup gets underway in England, with the host nation playing Uruguay to a 0-0 draw at the original Wembley Stadium in London.

England would go on to win the tournament, defeating West Germany 4-2 in extra time at Wembley on July 30.

* 6 Robert Frederick Chelsea Moore, a.k.a. Bobby Moore, the Captain, born April 12, 1941 in Barking, East London. 1958-74 West Ham United, 1974-77 Fulham, 1976 on loan to the NASL's San Antonio Thunder, 1978 Seattle Sounders (the original NASL version), 1978 Herning Fremad (a club in Denmark that later merged with another to form FC Midtjylland). Despite his name and his London origin, he never played for West London club Chelsea.

* 14 James Christopher Armfield, a.k.a. Jimmy Armfield, right back, born September 21, 1935 in Denton, Lancashire. 1954-71 Blackpool. Although he was acclaimed "the best right back in the world" during the 1962 World Cup, an injury kept him out of the 1966 edition. Later managed Leeds to the 1975 European Cup Final, losing to Bayern Munich.

* 15 Gerald Byrne (no middle name), a.k.a. Gerry Byrne, left back, born August 29, 1938 in Liverpool. 1957-69 Liverpool. Famously helped Liverpool win the 1965 FA Cup Final despite playing most of the game with a broken collarbone. Selected for the 1966 World Cup team, but did not play in the tournament.

* 17 Ronald Flowers (no middle name), a.k.a. Ron Flowers, midfielder, born July 28, 1934 in Doncaster, South Yorkshire. 1952-67 Wolverhampton Wanderers (West Midlands), 1967-69 Northampton Town, 1969-71 Telford United (Shropshire). Although he played for England in the 1962 World Cup, he did not appear in the 1966 edition despite being selected for the team. His brother John Flowers was a successful player for hometown club Doncaster Rovers. So was their uncle George Flowers.

* 18 Norman Hunter (no middle name), centreback, born October 29, 1938 in Gateshead, Tyne and Wear. 1962-76 Leeds United (Yorkshire), 1976-79 Bristol City (Gloucestershire), 1979-82 Barnsley (Yorkshire). The epitome of the "Dirty Leeds" teams of the latter half of the Sixties and the first half of the Seventies, during the 1972 FA Cup Final in which Leeds beat Arsenal, a Leeds fan held up a banner reading "NORMAN BITES YER LEGS." He was known as Bites Yer Legs Hunter from then on. Legend has it that, when he broke his own leg in training, someone told the club trainer, "Norman has broken a leg," and the trainer said, "Whose is it?" He was named to 2 World Cup squads, but only made 1 appearance, in 1970.

* 21 Roger Hunt (no middle name), forward, born July 20, 1938 in Glazebury, Cheshire. 1958-69 Liverpool, 1969-72 Bolton Wanderers (Lancashire). Hurst has always said that if there had been any doubt that his 2nd goal had crossed the line, Hunt would have rushed in to put it over. Instead, Hunt turned away to celebrated it, suggesting that it was totally legit.

* 22 George Edward Eastham, forward, born September 23, 1936 in Blackpool, Lancashire. 1953-56 Ards (Bangor, Northern Ireland), 1956-60 Newcastle United (Tyne and Wear), 1960-66 Arsenal, 1966-73 Stoke City (teammates with Banks, including in their sojourn in Cleveland), 1974-76 Hellenic (Cape Town, South Africa). Best known as the player whose legal case broke England's maximum wage for footballers. This did not stop him from playing for England in the 1962 World Cup, although he was not put into any of the games for the 1966 edition. Later fought apartheid in South Africa as a white manager of black teams.

On the books of these teams at the time: 3 for Liverpool, 3 for Manchester United, 3 for West Ham United, 2 for Blackpool, 2 for Leeds United, and 1 each for Arsenal, Blackpool, Chelsea, Everton, Fulham, Leicester City, Sheffield Wednesday, Southampton, Tottenham Hotspur and Wolverhampton Wanderers.

Also with England at the 1958 World Cup: Bobby Charlton.

Some of them might have made the team for England at the 1974 World Cup, but England did not qualify.

Queen Elizabeth II handed the World Cup itself, the Jules Rimet Trophy, to Captain Bobby Moore. There is a movement to convince her to grant him a posthumous knighthood. But if Horatio Nelson, Alan Turing and John Lennon aren't going to be posthumously knighted, then Moore stands little chance. Thus far, the Queen has knighted 2 members of the team: Sir Bobby Charlton and Sir Geoff Hurst.

All of the players lived to see the 25th Anniversary of the achievement. All lived to see the 30th and the 40th, except for Moore: He died of colon cancer on February 24, 1993. He was only 51.

Now, in addition to Byrne's battle with Alzheimer's, 4 other members of that team are experiencing dementia: Wilson, Stiles and Peters have been diagnosed with Alzheimer's, and Jack Charlton says, "I haven't got a memory now. I forget things easily." He is no longer allowed to drive, or to go fishing alone. Stiles, Banks and Greaves are also battling cancer. Greaves, the Football League's all-time leading goalscorer, has had strokes, and is now wheelchair-bound.

Their numbers do not include Jeff Astle, perhaps the best-known English footballer to have had football-related dementia. He starred as a forward for West Midlands club West Bromwich Albion, and played for England in the 1970 World Cup. Nor do they include Gerd Müller, the German star who did not make that World Cup, but would eliminate England from the 1970 edition and win it in 1974, and was diagnosed last year.

Pat Wilson, Ray's wife, says, "There are people he played with at Huddersfield and Everton with Alzheimer's. They are all over. They have talked about heading the leather ball causing it."

The balls of that era were heavier than they are today, and, being made of leather, got heavier still when wet.

The surviving players have a golf outing every year. John Stiles, Nobby's son, says, "It's a real shame he can't go to the get-together anymore, because he loved going. He loved the camaraderie they had. That is what made them so special. But, unfortunately, like so many who played in that era and headed those heavy balls, my father has now got dementia. Many other players have some sort of degenerative brain disease."

When an event like winning a world championship happens, they say the participants and the spectators "will never forget."

Sadly, we now know that this is not necessarily true.