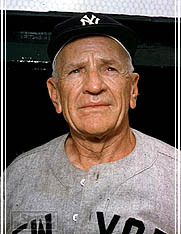 October 12, 1948: The Yankees hire Casey as manager. He had just managed the Oakland Oaks to the Pacific Coast League Pennant, but his previous major league managing jobs, with the Brooklyn Dodgers and Boston Braves, had been busts.

For 12 seasons, he had won 10 American League Pennants and 7 World Series, including a record 5 straight World Championships from 1949 to 1953, another 4 straight Pennants from 1955 to 1958, played a zillion hunches, proved himself a master of the hunch, stood up for his players (most of the time), and alternately delighted and confounded the media with his reworking of the English language, a verbal twisting they labeled "Stengelese." He managed Hall-of-Famers: Joe DiMaggio, Phil Rizzuto, Johnny Mize, Enos Slaughter, Yogi Berra, Mickey Mantle and Whitey Ford. He managed Monument Park honorees DiMaggio, Rizzuto, Berra, Mantle, Ford, Allie Reynolds, Billy Martin and, in his final season, Roger Maris.

Some of the players he managed also became managers. Between them, Berra, Martin, Ralph Houk and Hank Bauer won 8 Pennants and 4 World Series.

Webb and Topping called a press conference at which Casey was forced to read a resignation statement. When he was finished, he told the media, "I guess this means they fired me."

The way they handled it, it was cold. It was cruel. It was impersonal. It was unprofessional.

But the actual decision to fire him: Was it right?

5. Connie Mack. Mack owned the Philadelphia Athletics, so he knew he couldn't be fired as manager. But by the time World War II ended, he was 83 years old, and he was clearly senile, calling out the names of players long gone from the A's roster. 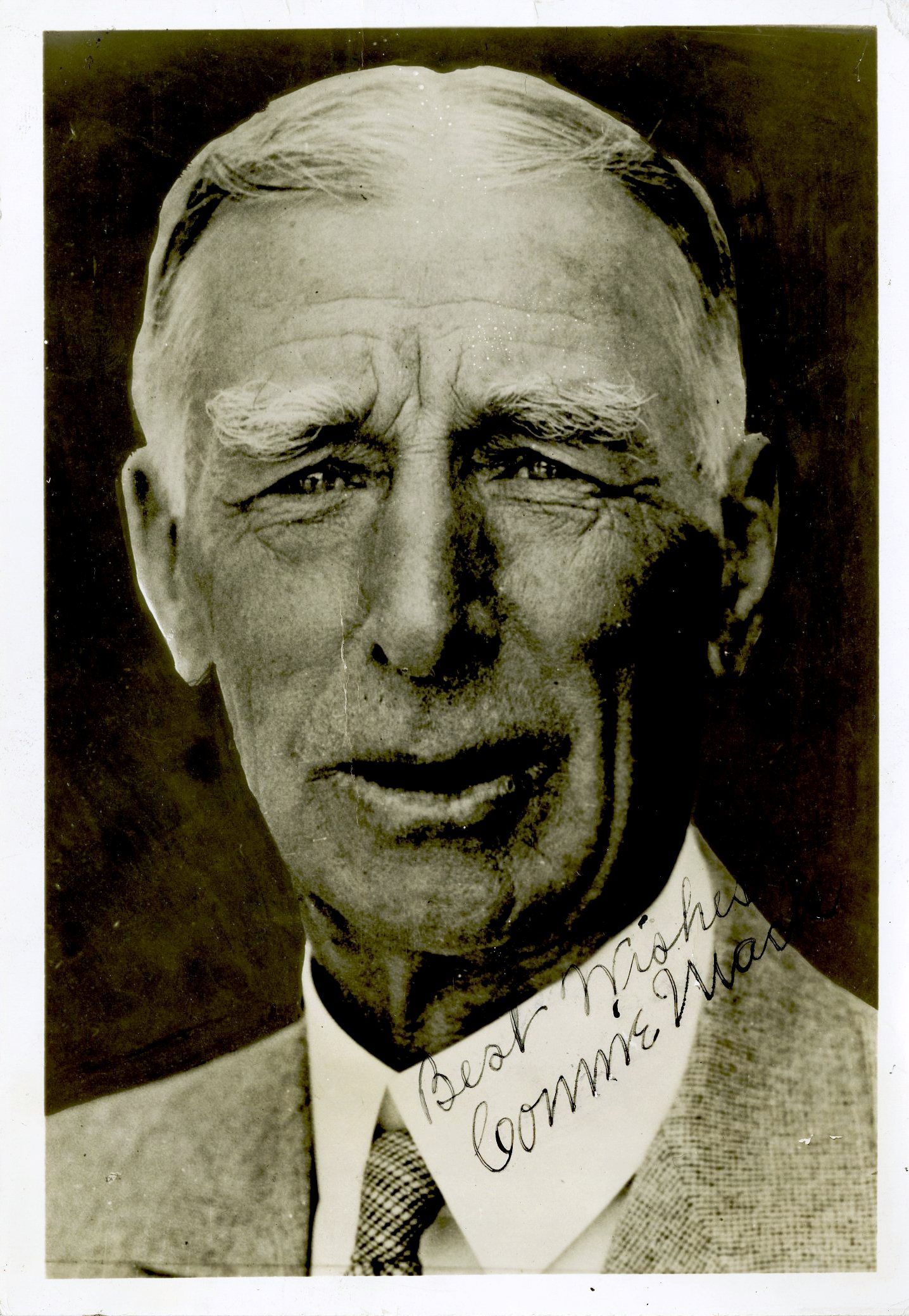 Finally, after the 1950 season, his 50th in charge, his sons, not willing to break the old man's heart by firing him during his Golden Anniversary season, decided they could wait no longer. They maneuvered the 88-year-old "Grand Old Man of Baseball" out of his controlling interest.

By the late 1950s, Casey was falling asleep on the Yankee bench, especially during night games. Yankee brass, remembering Mack's last 5 years in charge -- only a few years earlier -- may have gotten worried that the same fate awaited Casey.

From 1962 to 1965, Casey was the 1st manager of the Mets. They were lousy, but not because of his managing. At age 75, his mind was still sharp. He retired to due physical discomfort, not mental incapacity. Even when he died at 85, his mind wasn't the issue. 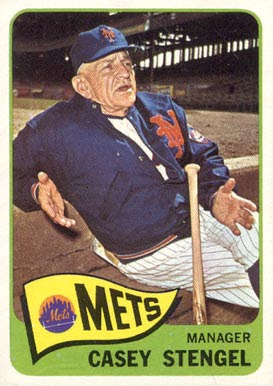 But with Mack in mind, it was understandable that it could have been.

4. Whitey Ford. His 1st full season in the major leagues, delayed somewhat by serving in the U.S. Army during the Korean War, was 1953. From that season until 1960, Casey did with Whitey what he did with most of his pitchers: Used him as a starter or a reliever, and, depending on who the upcoming opponent was, moved him forward or back in the rotation. He won 19 games once and 18 in 2 other seasons, but never won 20, the benchmark for a great starting pitcher at the time.

In the 1960 World Series, instead of using his best starter, Whitey, in Games 1, 4 and 7, he held him back for Games 3 and 6. The reason? He didn't want to use a lefthanded pitcher in Pittsburgh's Forbes Field twice. Except Forbes Field had dimensions that were, for all practical purposes, the same as those of the pre-renovation original Yankee Stadium.

Whitey pitched shutouts in Games 3 and 6, and could have done the same if he'd been pitched in Games 1, 4 and 7 instead. But because he'd pitched Game 6, Casey couldn't use him for Game 7 -- a game the Yankees lost 10-9. Had Whitey been on the mound even just for the bottom of the 9th, he might not have given up the walkoff home run to Bill Mazeroski like Ralph Terry did. Casey blew it. 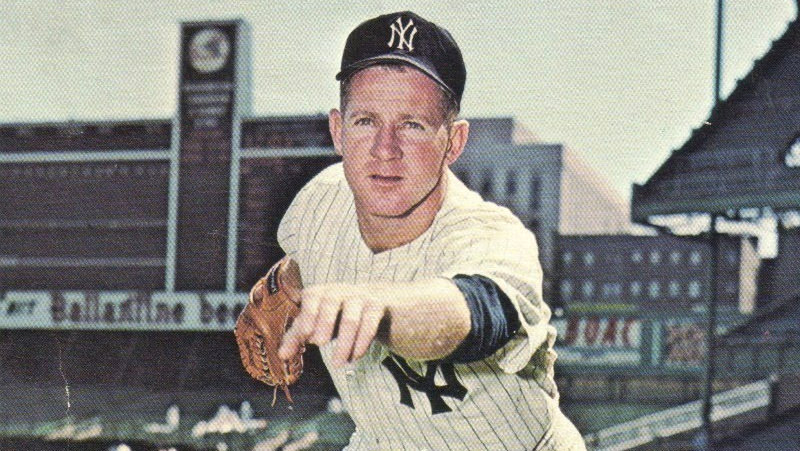 It was Houk, a former catcher, along with his teammates Yogi Berra and Elston Howard (also catchers), who made Whitey Ford the best starting pitcher in Yankee history; Casey not only had little to do with it, he damn near prevented it. (That it took Mariano Rivera to make the qualifier "starting" to the declaration of Whitey as the best pitcher in Yankee history possible should give you an idea of how good the Chairman of the Board was.)

3. Mickey Mantle. When the Mick came up as a 19-year-old rookie in 1951, Casey said that he would be Babe Ruth, Lou Gehrig and Joe DiMaggio all rolled into one. He wasn't -- but he had the talent to be mentioned alongside those guys with neither exaggeration nor irony.

But Casey never knew how to treat him. Casey was 41 years older than Mickey, and never even tried to understand him. He treated Mickey like he was still a naive 19-year-old hick from Oklahoma even when he was a seasoned 28-year-old veteran of 10 major league seasons and many a night out on New York and many other towns.

In spring training in 1961, Houk hauled Mickey into his office, and said that Mickey was going to be the team leader. (Not the Captain: From Lou Gehrig in 1939 until Thurman Munson in 1976, that title was officially retired.) As such, Houk was expecting Mickey to take more responsibility. Houk, an Army officer in World War II whose nickname was his final rank, "The Major," decided it would be better to treat Mickey like a man.

It didn't work off the field, but on it, Mickey grew up. It worked the other way, too: His teammates always liked him, but now, they respected him, too. 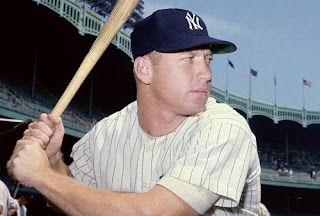 2. Ralph Houk. With the usual amount of managerial turnover in Major League Baseball, plus 4 new expansion teams coming in the next year and a half (1961 and 1962), someone was likely to snap the Major up, unless the Yankees secured his managerial services first. And they didn't want to be stuck looking for somebody else.

Since Houk was promoted to general manager after 1963 and Yogi to field manager, it's possible Yogi could have been made a player-manager in '61 or '62.

1. It Worked. In his 1st season after taking Casey's place, 1961, Houk guided the Yankees to 109 wins and the World Championship. In 1962, he guided the Yankees to another. In 1963, he won 104 games and won another Pennant, although they lost the World Series. In 1964, with Houk in the front office and Yogi in the dugout, they won another Pennant, but lost the Series in 7 games.

Webb and Topping were very wrong in how they fired Casey. But they were very right in wanting to move on. Casey deserved a better fate, but it was time for him to go.

August 8, 1970: Five years after his last game as a manager, and the retirement of his Number 37 by the Mets, and a week after his 80th birthday, the Yankees also retire Number 37 for Casey during their annual Old-Timers Day ceremony. The team was now owned by CBS and operated by Michael Burke, so the old owners no longer had to save face and apologize to him. 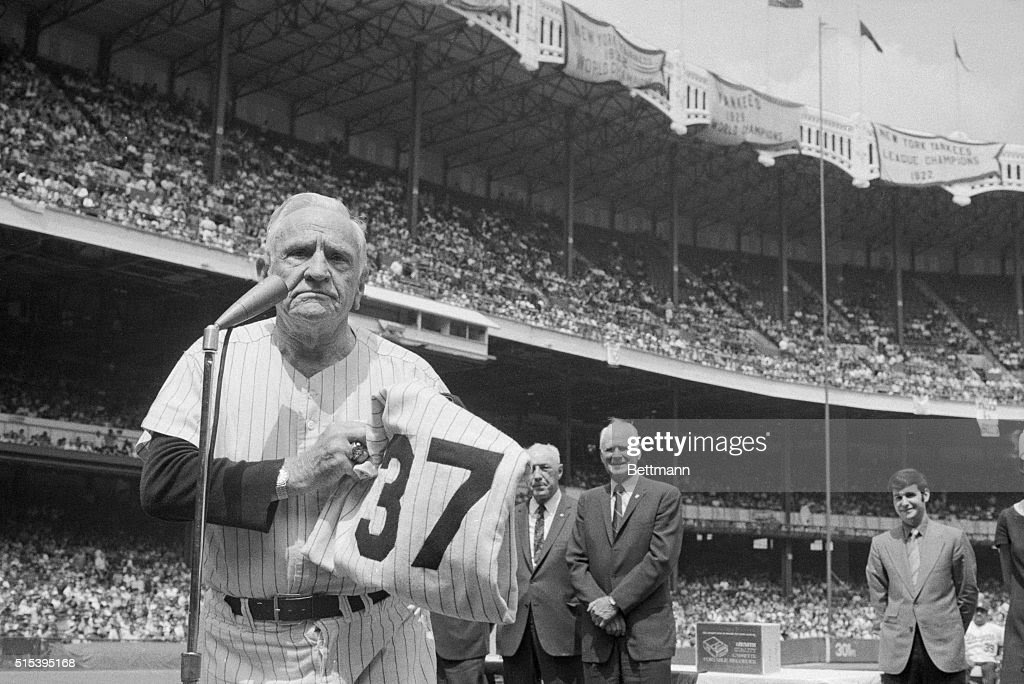 September 29, 1975: Casey Stengel dies of cancer in the Los Angeles suburb of Glendale, California, his offseason home for most of his post-playing life. He was 85.

July 30, 1976: The Yankees dedicate a Plaque in Casey's memory in Monument Park at Yankee Stadium. 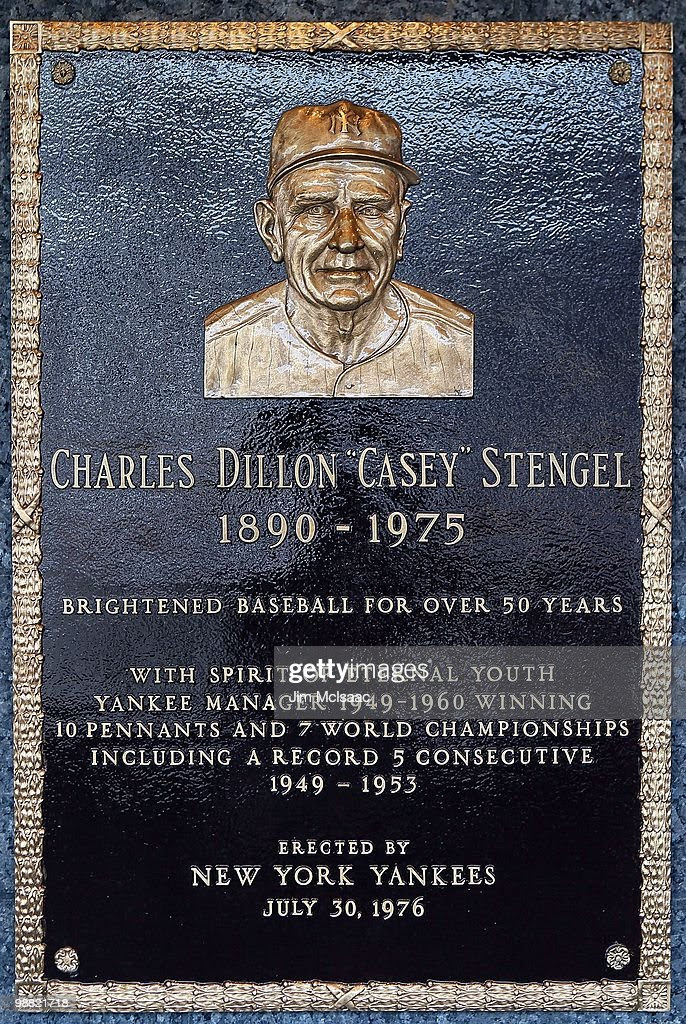