Everyone who said the Yankees had no chance at the Playoffs: Shame on you.

I have to admit: While I hoped they could take at least 3 out of these 4 games with the 1st-place Baltimore Orioles, I had a feeling that if they only lost 1, it would be the Thursday day-game-after-a-night-game. I was right.

Anyway, after taking the 1st 2, the Yankees needed Michael Pineda to snap out of it. Did he ever: 6 innings, no runs, earned or otherwise, 5 hits, 2 walks, 8 strikeouts. His best performance of the season.

He threw 113 pitches, so, naturally, Joe Girardi panicked and did't let a pitcher who was clearly still cruising pitch the 7th.

But can that decision really be faulted? Not this time, as Dellin Betances, Nick Goody and Chasen Shreve -- yes, Goody and Shreve -- each pitched a perfect inning.

Of course, to paraphrase the late, great Yogi Berra, Good pitching needs good hitting, and vice versa. In the 1st inning Carlos Beltran hit a sacrifice fly that scored Brett Gardner. In the 4th, Mark Teixeira hit a Teix Message, his 8th home run of the season. In the 6th, Teix drew a walk with the bases loaded. In the 7th, Gardner hit a sac fly that scored Ronald Torreyes. And in the 8th, Beltran went deep, his 20th dinger of the year.

One run at a time often isn't enough, but when you get the kind of pitching the Yankees got on Wednesday night, one run is all you need. Yankees 5, Orioles 0. WP: Pineda (4-9). No save. LP: Yovani Gallardo (3-2).

Yesterday's game was hot. Not CC Sabathia weather. And the O's were starting Chris Tillman, who looks headed for the American League's Cy Young Award.

CC allowed 2 runs in the 1st, and the way Britton was pitching, that was all the Birds needed. Starlin Castro had an RBI single in the 2nd, to give CC a run. He cruised after that, still trailing only 2-1, until the 7th, when he ran out of gas, and the O's tacked on 2 more.

So here's how things stand: It is now the Boston Red Sox who lead the AL East, by half a game over the Orioles (1 full game in the all-important loss column), a game and a half over the Toronto Blue Jays (but 3 in the loss column), 7 over the Yankees (8), and 17 over the Tampa Bay Rays (18).

The Rays seem to be proving that, despite all the players they lost, the one guy they simply could not afford to lose was manager Joe Maddon.

There are 67 games left to play. The next 3 will not be easy, as perhaps the best team in baseball, the San Francisco Giants, comes into Yankee Stadium II. Here's the projected pitching matchups:

Dennis Green died today, of a heart attack at age 67. Born on February 17, 1949 in Harrisburg, Pennsylvania, Dennis Earl Green claimed to have been at what's now the Hersheypark Arena on March 2, 1962, when Wilt Chamberlain scored 100 points for the Philadelphia Warriors against the Knicks. (It's possible: He would have just turned 13, and the arena is only 14 miles east of downtown Harrisburg.)

He went to the University of Iowa, and did well there both in the classroom and on the field. He was planning to be a high school teacher, but played the 1971 season for the British Columbia Lions of the Canadian Football League. He was then hired as an assistant coach at the University of Dayton in Ohio, back at Iowa, and at Stanford University, then coached by Bill Walsh. When Walsh got the head job with the San Francisco 49ers, he took Denny with him as special teams coach.

After just 1 more year, Stanford took him back, as offensive coordinator. Northwestern University, in the Chicago suburb of Evanston, Illinois, was desperate: They had were in the process of forging what is still the longest losing streak in the history of NCAA Division I football. (It's been surpassed by Columbia and Prairie View A&M, but it's still the longest in the history of Division I-A, now the Football Bowl Subdivision or FBS.) It was so bad that somebody found a highway sign saying, "Interstate 94," and added below that, "Northwestern 0."

They were desperate enough that they hired Denny Green as only the 2nd African-American head coach in Division I-A history. (The 1st was Willie Jeffries at Wichita State in 1979. He didn't win there, but won titles at historically black schools South Carolina State and Howard University. He is still alive, age 81.) Denny couldn't stop the Wildcats from losing a 29th straight, to set a new record. But on September 25, 1982, he beat Northern Illinois to end the streak at 34 straight. They finished 3-8, and he was named Big Ten Coach of the Year.

In 1986, Walsh took him back to San Francisco, and he coached the receivers. That means he coached Jerry Rice and John Taylor. He won a ring in Super Bowl XXIII. In 1989, Stanford once again went up the Peninsula and took him from Candlestick Park back down to "The Farm," making him head coach. In 1991, he went 8-3, finishing 2nd in the Pac-10.

That made the NFL call him again. The Minnesota Vikings named him head coach, and in 10 years he reached the Playoffs 8 times, won 4 NFC Central Division Championships, and got them to the NFC Championship Game in 1998 and 2000. 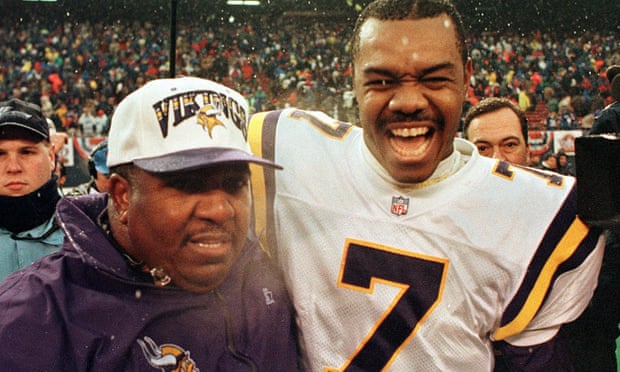 Unfortunately for him and Minnesota fans, in the former, the 15-1 Vikes lost to the Atlanta Falcons in overtime at the Metrodome when Gary Anderson, who hadn't missed a field goal all season long, missed one from 38 yards with 2 minutes left in regulation; and in the later, the Giants whupped them 41-0 at the Meadowlands.

He was fired at the end of the 2001 season. After 2 seasons as an ESPN analyst, the Arizona Cardinals hired him as head coach in 2004. His 1st 2 years with them were struggles, but the 2006 season began with the opening of the University of Phoenix Stadium, the drafting of Heisman Trophy-winning quarterback Matt Leinart, and the signing of Pro Bowl running back Edgerrin James.

After beating the 49ers in the opening game, Denny must have though the early Northwestern days had returned: The Cards lost 8 straight, 3 of them maddeningly close: 16-14 to the St. Louis Rams, 23-20 to the Kansas City Chiefs, and 24-23 to the Chicago Bears on Monday Night Football.

The Cards forced 6 turnovers, but blew a 20-point lead and lost the game, and Denny, a man who rarely lost his temper, did so in the postgame press conference, making himself a legend for people who might not have even remembered his name, but they remember this tirade:

The Cardinals then lost 3 more games. But after the 8-game losing streak, they went 4-2, and recovered some pride. They finished 5-11, losing 5 games by a total of 18 points. They probably weren't that far from turning it around. But owner Billy Bidwill wasn't willing to trust Denny Green with the turnaround: He fired him, and replaced him with Ken Whisenhunt. In Whiz' 1st season, he got the Cards to 8-8. In his 2nd, he got them to their 1st NFL Championship Game of any kind since 1948 -- 68 years, 2 cities and 4 stadiums earlier.

In 2007, Westwood One hired Denny to be the analyst on their Thursday night NFL radio broadcasts. He held that job through the 2008 season, and then spent 3 years coaching in the United Football League.

Overall, his record as a college head coach was 26-63, though that was mainly due to things that went on at Northwestern well before he got there. In the NFL, he was 113-94.

He is survived by his wife Marie, and 4 children: Patti, Jeremy, Zach and Vanessa.

Denny Green, you were a better coach than you ever got credit for, and a better man, too. You were more than they thought you were.