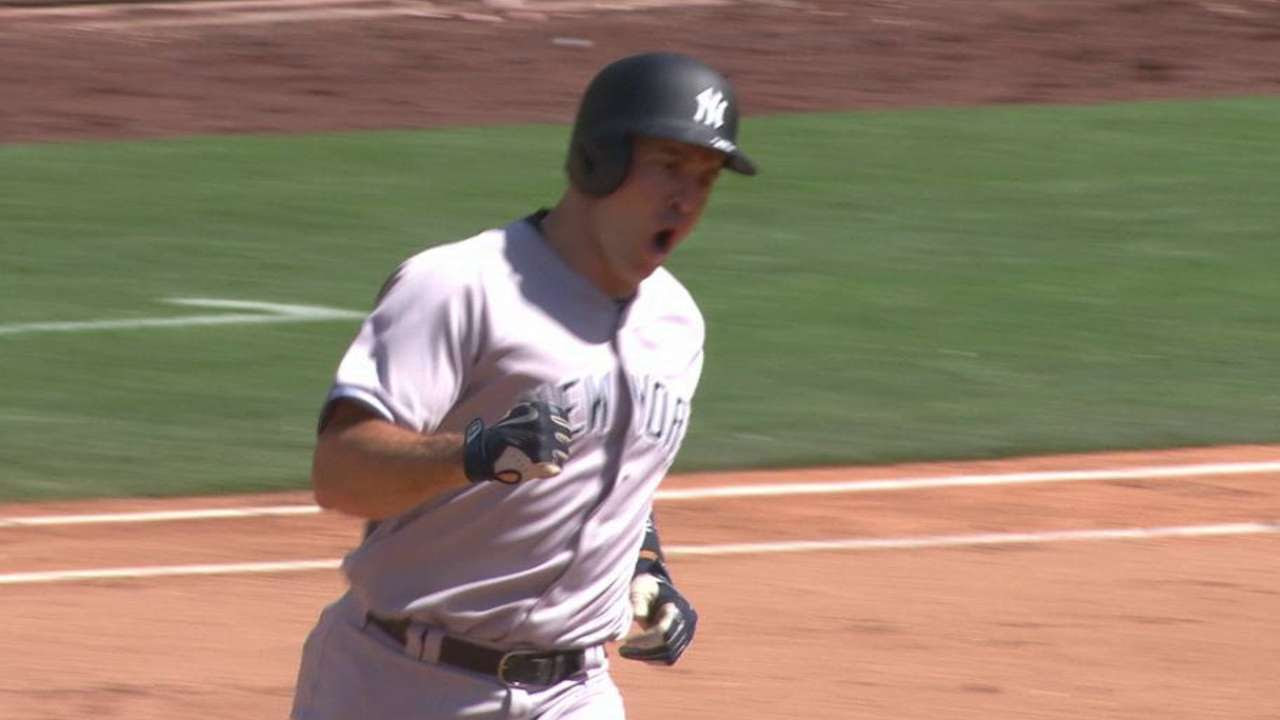 The Yankees flew out to San Diego for a weekend Interleague series with the San Diego Padres. The Friday night game did not go their way. For the 4th straight game, Nathan Eovaldi, who'd been so good the last year and a half, was terrible. He allowed 4 runs in the 1st 2 innings, 6 in less than 5, and the Yankees never recovered.

Brian McCann hit his 13th home run of the season, and Didi Gregorius had 2 hits including an RBI double, and Conor Mullee and Anthony Swarzak both pitched well in relief. (Although Richard Bleier did not.) It wasn't enough: Padres 7, Yankees 6. WP: Colin Rea (5-3). SV: Brandon Maurer (1). LP: Eovaldi (6-6).

The Saturday game was an old-fashioned pitching duel -- or it would have been, if Joe Girardi and Andy Green weren't such scaredy-cats when it comes to pitch counts. Ivan Nova and Drew Pomeranz should have taken it deep into the game, but neither really did. Pomeranz left after 7, but Green, just 38 and the youngest manager in the majors (and not to be confused with New Jersey Devils captain Andy Greene) took him out after 7 innings and 92 pitches. Girardi took Nova out in the 6th, having thrown only 77, and having allowed just 1 run on 4 hits and a walk, striking out 7.

Girardi brought in Dellin Betances, who got out of a jam, and pitched a scoreless 7th. A leadoff double by Jacoby Ellsbury in the top of the 6th, 1 of only 6 hits the Yankees got, followed by a sacrifice bunt by Brett Gardner and a Starlin Castro groundout, kept it 1-1 into the 8th.

Had Girardi stuck with Nova, Betances might have been able to pitch the 8th. Instead, he sent Andrew Miller out there, and kept him there for the 9th, instead of bringing on Aroldis Chapman, who hadn't pitched the night before. Miller pitched to 1 batter in the 9th: Melvin Upton Jr. Home run. Yankees lose. Another game thrown away by Girardi's idiotic bullpen moves.

So the Yankees really needed to win the Sunday game. Rookie Chad Green started for the Yankees, and he got the job done: 6 innings, 1 run, 3 hits, no walks, 8 strikeouts. Talk about a "Green Light."

The run he allowed was a home run by brief Yankee sensation Yangervis Solarte. Oh well.

Betances pitched a scoreless 7th. Miller redeemed himself with a scoreless 8th. But Girardi looked in his damn binder, and it said, "Don't put your closer in with a 5-run lead." Well, he put Swarzak in, and soon the lead was down to 3 runs. He brought Chapman in, and that ended it.

So, at the numerical halfway mark of the season, the Yankees are 40-41, 7 games behind the Baltimore Orioles for the lead in the American League Eastern Division, and 3 1/2 behind the Detroit Tigers for the 2nd AL Wild Card.

Things have to get better. Today, the Yankees begin a series away to the similarly (42-40) struggling Chicago White Sox.

Come on you Bombers! Let's see some fireworks -- and not from U.S. Cellular Field's exploding scoreboard, but from you, the visitors!
Posted by Uncle Mike at 2:12 PM