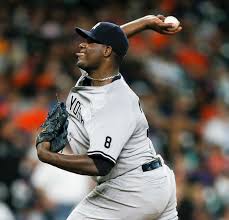 Looks like I was wrong: Maybe Joe Girardi will let his starters pitch 7 innings after all.

The Yankees began a series away to the Houston Astros, the team that beat them in last year's American League Wild Card game, against the pitcher who won that game and the AL's Cy Young Award. (And, as I suggested last November, should have gotten the Most Valuable Player award as well.)

Michael Pineda, who'd been shaky this season, had his 2nd straight strong start. He was, indeed, allowed to go 7 innings, and throw 103 pitches, allowing 1 run -- a home run by George Springer in the 1st inning -- on 5 hits and 2 walks, striking out 8. This is in Minute Maid Park, formerly known as Enron Field, nicknamed Ten Run Field because it's such a good hitter's park.

With 2 outs in the top of the 5th, Didi Gregorius hit a double, and Chase Headley singled him home to tie the score. Headley led off the 8th with a single, and Austin Romine doubled him home to give the Yankees the lead.

So the Yankees won without needed a reliever in the 7th inning. Maybe the stupid Aroldis Chapman trade wasn't so stupid after all.

But if Adam Warren ends up being the reason the Yankees don't make the Playoffs, I will remind everyone that I told you so.

But what I also told you so is that good things can happen if you trust your starting pitcher when he's pitching well.

The series continues tonight. CC Sabathia starts against Doug Fister. Come on you Bombers!
Posted by Uncle Mike at 7:55 PM