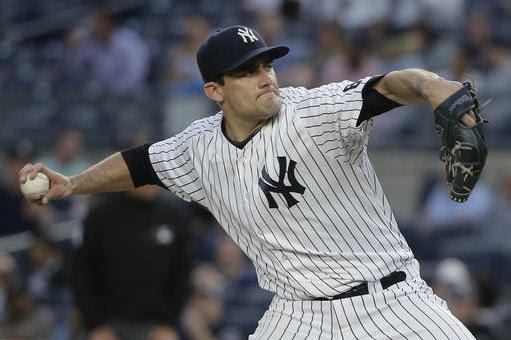 The Yankees won the 1st game of their big series against the 1st place Baltimore Orioles, but they had to keep it going in the 2nd game last night.

Nathan Eovaldi was restored to the starting rotation after a bullpen sojourn, itself following 4 bad starts in a row.

Looks like said sojourn was just what the doctor ordered: We got the old Nasty Nate back. Joe Girardi let him pitch into the 6th inning, allowing 1 run on 4 hits and 2 walks, before taking him out as he seemed to be getting into trouble. Anthony Swarzak got out of the jam, then pitched the 7th and the 8th, going 2 2/3rds perfect.

Starlin Castro hit a home run in the 2nd inning, his 11th of the season, driving in Didi Gregorius ahead of him. That's all the Yankees needed, as it turned out, though they did get another home run, from Chase Headley, his 9th.

Sounds to me like, with the trading deadline of July 31 approaching, Headley does not want to be traded. Hey, if he keeps hitting like this, let's keep him.