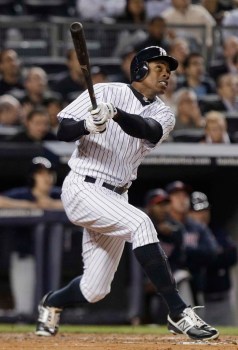 Again, please excuse my gap in posting. A few things have been going on in real life, and had to be attended to. The one that had the biggest impact -- if you'll pardon the pun -- was dental surgery.

Tuesday night: The Yankees made the Minnesota Twins pay for Carl Pavano's beating them the night before. CC Sabathia (1-0) pitched into the 8th, allowing only 4 hits and 1 walk, 3 runs. In contrast, the Yankees got to Nelson Liriano (0-2) early, knocking him out of the box with 4 runs in the 3rd, including Andruw Jones' 2nd home run of the season. Yankees 8, Twins 3.

Wednesday night: I was actually supposed to go to this one, but my ticket source's source fell through. Good thing, because with my bad tooth I wouldn't have been able to go. Hiroki Kuroda (1-2), heard the Bronx boo-birds for the 1st time, as he didn't have anything: 10 hits (although no walks) and 6 runs and he didn't get out of the 5th. Twins starter Jason Marquis (the Staten Island native is 1-0) wasn't much better, but better enough. Both bullpens were actually pretty good.

Robinson Cano hit his 1st homer of the season, and the Yanks went into the bottom of the 9th trailing 6-4. Matt Capps (3rd save) closed it out for the Twins, but the Yanks made it interesting. Derek Jeter hit his 4th homer, and Mark Teixeira came soooo cloooose to tying it up, but his drive was caught in the right-field corner for the last out. John Sterling, on WCBS, had me thinking it was out. (He does that sometimes. It's one of those things that contradicts his frequent missive to his broadcast partner, Suzyn Waldman: "You know, Suzyn, you just can't predict baseball.") Twins 6, Yankees 5.

Last night was a different story. A much better story. Though it didn't start out that way.

The 1st 4 Yankee pitchers were Phil Hughes, Boone Logan, Rafael Soriano and David Robertson, all of whom have faced my wrath over the last couple of seasons.

And the Twins scored 4 runs in the top of the 1st. It went like this:

* Because the DH slot was open, Girardi put regular 2nd baseman Robinson Cano in that slot.

* Because the 2B slot was open, Girardi put Eduardo Nunez there.

* Because Nunez can play several positions but none of them well, he fucked up a double play on a Joe Mauer grounder, which would have ended the inning after 3 batters and no runs.

It would be easy to say, "Don't blame Hughes." Well, you can only play the hand you're dealt, and he was dealt a busted flush that turned into a pair of 6s. But he played it very poorly, and 4 unearned runs ended up scoring.

But in the bottom of the 1st, Curtis Granderson hit his 4th homer of the season off Twins starter Anthony Swarzak. Teixeira, yet again extending the Yankee tradition of 1st basemen getting off to slow starts, hit his 1st of the year later in the inning. Twins 4, Yankees 3, and we're back in it.

The Yanks took the lead in the 2nd: NunE5 -- excuse me, NunE4 -- doubled, Jeter singled him home to tie it, and Granderson hit his 2nd of the game to produce a 6-4 lead.

Then in the 4th, Granderson hit a screaming liner into the right field seats. His 3rd homer of the game, his 6th of the season.

This was the 20th time that a Yankee has hit 3 home runs in a game -- Babe Ruth (twice) and Reggie Jackson having done it in World Series play. (Last year, Albert Pujols became the first non-Yankee to do it in a World Series game.) Only Lou Gehrig has hit 4: On June 3, 1932, at Shibe Park in Philadelphia, in a 20-13 slugfest against the Philadelphia Athletics.

No player has ever hit 5 home runs in a game; of the 15 players who've hit 4 (Carlos Delgado is the last to do it, in 2003 with the Toronto Blue Jays), Gehrig came the closest to a 5th, getting robbed on a great catch by A's Hall-of-Famer Al Simmons in the 9th inning.

Gil Hodges is the only other New York-based player to do it, with the 1950 Dodgers; Willie Mays did it with the Giants in San Francisco in 1961, Rocky Colavito and Mark Whiten did it for other teams before becoming Yankees, and Delgado and Shawn Green did it for other teams before becoming Mets. The first player to do it was Bobby Lowe with the 1894 Boston Beanaters (Braves), and Gehrig was the first to do it in the American League.

So the Yankees split the series with the Twins, and end the homestand 7-6, tied with the Tampa Bay Rays, 1 game behind the Baltimore Orioles, with the Jays a game and a half (1 in the loss column) behind the O's, and the Boston Red Sox 3 1/2 back (3).

Today, the Yankees start a series in Boston against the Sox. I'll have more on that shortly. But I have to post something else first, because I may not get a chance to otherwise.
Posted by Uncle Mike at 9:22 AM