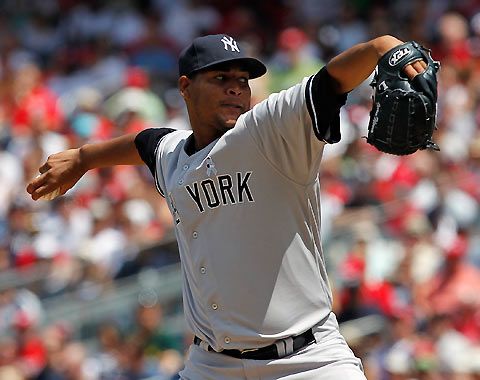 I met him on the mound down at Camden Yards.
And we needed him to pitch and to throw real hard.
Ivan Nova.
I-V-A-N Nova.
No-no-no-no-Nova!

With apologies to the Kinks -- and whoever that was that Ray Davies was singing about in 1969.

If I had been told before last night's game that Nova would allow the Baltimore Orioles 10 hits, in that Baltimore bandbox, I would've said, "Uh-oh, here we go again. 0-4!"

Wrong! Yes, he allowed 10 hits, but no walks! I love giving up no walks! He pitched 7 strong for the win (1-0), David Robertson pitched a scoreless inning on his 27th birthday, and Mariano Rivera closed it out -- although it wasn't a save situation.

Of course, Phil Hughes had pitched fairly well the day before, and the Yankee bats proved it doesn't matter if you don't score enough runs of your own.

Last night, they did. Mark Teixeira -- the Severna Park, Maryland native still getting booed in his "hometown" after spurning the O's 3 times, the most recent to sign with the Yankees -- hit an RBI single in the 1st off Oriole starter Brian Matusz (0-1).

Curtis Granderson started the key rally in the 4th by drawing a walk. Andruw Jones did the game. Russell Martin singled Grandy home and Jones to 3rd. Eduardo Nunez -- or, as somebody called him on Twitter last night due to his defensive ineptitude, "NunE5" -- brought Jones home with a sacrifice fly. And Derek Jeter, in the highlight of a 4-for-4 night, doubled home Martin. Jones homered in the top of the 6th to complete the scoring.

I've heard of a relief pitcher. Last night, Ivan Nova was a relief starter. Shades of Ron Guidry in 1978, although Nova is a black righthander from the Dominican Republic, Guidry was a white lefthander from Louisiana, and the Orioles were, if you remember, one of the 3 teams to beat Guidry in '78 (along with the Milwaukee Brewers and Toronto Blue Jays), in his 25-3 season (27-3 if you count the postseason).

We really needed that.

So... Tonight, the series in Baltimore continues. Veteran Freddy Garcia pitches against Wei-Yin Chen -- as I said before, a lefty making his major league debut against the Yankees. Danger, danger, Will Robinson! Or Robinson Cano!

Days until the Yankees' home opener: 3, this Friday afternoon, against the Whatever They're Calling Themselves This Year Angels of Anaheim.

Days until the Red Bulls play again: 4, Saturday afternoon, home to the San Jose Earthquakes. They beat Columbus Crew 4-1 this past Saturday, on 2 goals each by Kenny Cooper and Thierry Henry.

Days until the next Yankees-Red Sox series begins: 10, a week from this Friday night, at Fenway Park in Boston.

Days until the Red Bulls next play a "derby": 12, on Sunday night, April 22, vs. DC United at Robert F. Kennedy Stadium in Washington. (Rescheduled from the night before.) They next play the New England Revolution the following Saturday afternoon at Red Bull Arena, and the Philadelphia Union on Sunday afternoon, May 13, at PPL Park in Chester, Pennsylvania.

Days until the last Nets game in New Jersey: 13, on Monday night, April 23, against the Philadelphia 76ers, at the Prudential Center. Under 2 weeks before New Jersey no longer has an NBA team.

Days until the Devils play another local rival: Unknown. They start in the Playoffs this Friday night, at the Florida Panthers. Both The Scum (the New York Rangers) and The Filth (the Philadelphia Flyers) also made the Playoffs, so it is possible we could face one (or even both) of them. Especially if the Rangers, as the 1st seed, beat the Ottawa Senators, the 8th seed, and the 7th-seeded Washington Capitals don't beat the 2nd-seeded Boston Bruins: Then, it would be Devils vs. Rangers in the Conference Semifinals. Devils vs. Flyers could only happen in the Conference Finals, and the odds of both teams getting that far is not good. But the soonest the Devils could face the Rangers in the Playoffs, Game 1 of the Conference Semifinals, would be in 19 days, on April 29. If not, then the soonest would be at the start of next season, in early October.

Days until the U.S. National Soccer Team plays again: 46, Saturday night, May 26, against Scotland, at EverBank Field in Jacksonville -- formerly known as Jacksonville Municipal Stadium and Alltel Field, home of the NFL's Jaguars. Under 7 weeks.

Days until the next North London Derby: Unknown, as the Premier League announces its schedule for the upcoming season on the 2nd Friday in June, and the new season always starts on the 2nd Saturday in August -- meaning that the next Arsenal-Tottenham match can't be any earlier than August 11, which is 123 days (4 months) from now.

Days until Rutgers plays football again: 144, on Saturday September 1, at the Superdome in New Orleans against Tulane University. Not exactly a rivalry game, although Tulane was founded by a Princeton man. And thus will begin the Kyle Flood Era. Good luck...

Days until East Brunswick High School plays football again: 157, on Friday, September 14, opponent and location to be determined. A little over 5 months.

Days until the next East Brunswick-Old Bridge Thanksgiving clash: 226.