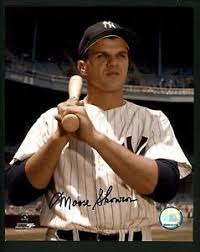 We lost a Yankee Legend today. The Moose. And I don't mean Mike Mussina.

William Joseph Skowron Jr. was born in Chicago on December 18, 1930, and at the age of 7 got a haircut that someone said made him look like Italian dictator Benito Mussolini. He was "Moose" from then on, although his baseball cards usually listed him as "Bill Skowron."

In Game 7 of the 1956 World Series -- the last postseason game played at Brooklyn's Ebbets Field -- he hit a grand slam home run off Dodger pitcher Roger Craig. In 1957, he made the last out of the Series, but in 1958 he got the winning hit in Game 6 and homered in Game 7. Both Series were against the Milwaukee Braves.

Moose appeared in 5 All-Star Games, and hit 165 of his 211 career home runs for the Yankees. Had he played in almost any ballpark other than the pre-renovation original Yankee Stadium, with its left and center field "Death Valley," or been a lefthanded hitter in the same stadium, he might have had twice as many home runs.

He never won a Gold Glove -- they were first given out in 1957 -- but he was as good a fielder as any 1st baseman in baseball in that time, with the exception of Gil Hodges of the Dodgers. He was the 1st long-term 1st baseman the Yankees could rely on since the illness-forced retirement of Lou Gehrig in 1939.

After the 1962 season, with Joe Pepitone coming up, the Yankees traded Moose to the Dodgers, who had moved to Los Angeles. Big mistake: Moose helped the Dodgers beat the Yankees in the 1963 World Series, giving him a 5th ring and resulting in him being one of the few players to hit World Series home runs for teams in both leagues, and also one of the few players to play on back-to-back World Champions with 2 different teams. (Another, 1947 Yankee and 1948 Cleveland Indian Allie Clark, died a few days ago.) To make the trade worse, Williams, whose relief work had cost the Dodgers the 1962 National League Pennant, was no prize in Pinstripes.

Moose was an All-Star one more time, in 1965 for his hometown White Sox, and finished his career with the team then known as the California Angels in 1967. His lifetime batting average was .282, and his OPS+ was a strong 119.

After retiring, he worked in community relations for the White Sox until cancer overtook him, but usually made it back to Yankee Stadium (old and new) for Old-Timers' Day. He was one of the old-time players on the field when the old Stadium closed in 2008. Although he was not one of Mickey Mantle's drinking buddies, he was one of Mickey's pallbearers in 1995. 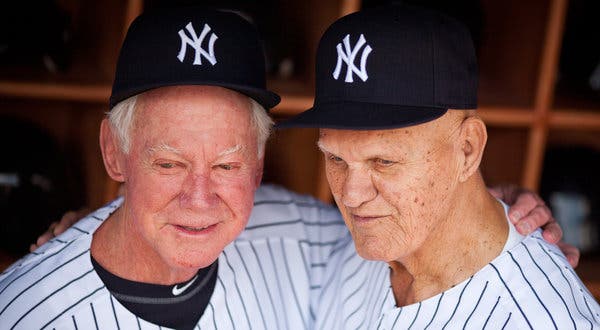 With Whitey Ford, a few Old-Timers' Days ago

"Moose could flat-out hit... for average, and he had real power," Mantle said. "People used to look at our lineup and concentrate on the guys in the middle of the order. Moose might have been batting sixth or seventh, but he made our lineup deep and more dangerous. You didn't want to give him too much around the plate. He was like Yogi, he could hit bad pitches out and beat you."

I met Moose, and also 1950s Yankee right fielder Hank Bauer, in Cooperstown, in 1994, when they were signing autographs outside a store near the Baseball Hall of Fame. Moose was terrific with everyone. Bauer, well, the guy was a Marine who still looked like he could crush anybody's spleen, so I can give him a little latitude for not being wonderful.

Moose Skowron died this morning, at home in Chicago. He was 81. He is survived by his wife Lorraine (a.k.a. "Cookie"), daughter Lynnette, sons Greg and Steve, brother Edward and 4 grandchildren.

* Moose did play in the 1956 World Series, but it was Joe Collins who played 1st base in Game 5, Don Larsen's perfect game. Larsen is still alive, over 55 years later. So are 2 other Yankees who played in the game, Yogi Berra and Andy Carey. Sadly, none of the Dodgers who played in the game are still alive. Still living from the '56 Yanks but not playing in the game are: Whitey Ford, Jerry Coleman, Johnny Kucks, Bob Cerv, Norm Siebern and Bob Turley. Still alive from the '56 Dodgers: Don Zimmer, Don Newcombe, Carl Erskine, Roger Craig, Randy Jackson (not the Jackson 5 singer or the American Idol panelist) and Ed Roebuck.

UPDATE: Moose's final resting place has not been publicly revealed.
Posted by Uncle Mike at 6:50 PM