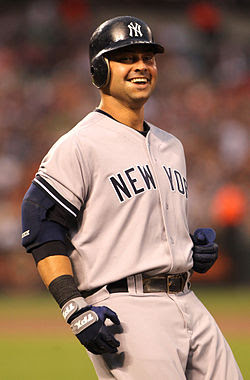 Things are back to normal: The Yankees win tough ones, and the Mets get embarrassed.

CC Sabathia was a bit shaky in the series finale at Camden Yards last night, as the Baltimore Orioles led the Yankees 4-3 after 5, in spite of a great start in which Derek Jeter led off the game with a hit and Curtis Granderson homered to stake the Yankees to a 2-0 lead.

But the Yankees scored in the top of the 7th to tie it up. Then manager Joe Girardi brought in Boone Logan to relieve.

This time, Logan didn't futz it up. He pitched to 5 batters and got them all out, before Girardi replaced him with Rafael Soriano, who remained in the game as the winning pitcher (1-0).

The game went on and on, as Yanks-O's games at Camden Yards tend to do, and into extra innings. In the top of the 10th, Kevin Gregg (0-1) got the 1st 2 outs (although one was Eduardo Nunez who singled and then stupidly got picked off, why is this useless mutt even in the major leagues?), before Mark Teixeira -- who really answered the catcalls of his fellow Marylanders in this series -- doubled to left.

And then Nick Swisher cranked one onto Eutaw Street for the winning margin. (He becomes the first Yankee to have hit 2 home runs in this young season.) Mariano Rivera, of course, got the save (2nd).

Traditionally, the ceremonial first ball before the home opener has been thrown out by "the greatest living Yankee." It was Joe DiMaggio, then Yogi Berra. There have, however, been others invited to do so, and, tomorrow, it will be Jorge Posada, pitching to Mariano. Weird, since we're so used to seeing that done the other way around, but appropriate.

Disney made a Broadway musical of Newsies, their 1992 film about the Newsboys Strike of 1899 -- starring a then 18-year-old future Batman Christian Bale -- and the star of the stage version, Jeremy Jordan, will sing the National Anthem tomorrow.

That number reminds me: Did you know the Red Sox are 1-5? They got off to a similarly bad start last season, and it cost them in the end. Chuckle chuckle smirk smirk.
Posted by Uncle Mike at 9:29 AM