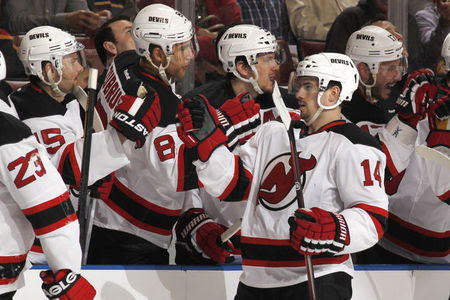 Last night, both the Devils (in double overtime) and The Scum (in regulation) won a Game 7 to advance to the NHL Eastern Conference Semifinals.

A Game 7 is a glorious thing. Unless you're in one. Then it becomes a gut-wrenching, mind-twisting thing. Unless, and until, you win it.

Here's a list of all the Game 7s ever played by a team in the New York Tri-State Area.

Note that, being football teams, the Giants and Jets only play one-off Playoffs. And that, prior to 1939, the Stanley Cup Finals was a best-of-five. The NBA Finals have always been a best-of-seven, although not every earlier round has been. The World Series has been best-of-seven, with the only exceptions being best-of-nine affairs in 1903, 1912 (and that was due to a tie forcing a Game 8), 1919, 1920 and 1921. But in those years, it never got to a Game 9. The League Championship Series was best-of-five until 1984, then became best-of-seven in 1985.

1970 New York Knicks: Won NBA Eastern Division Semifinals over Baltimore Bullets. Then won probably the most famous Game 7 in the history of New York sports over the Los Angeles Lakers in the Finals.

1973 New York Knicks: Won NBA East Finals over Boston Celtics. The first time the Celtics ever lost a Game 7 at the Boston Garden.

1994 New York Rangers: Won Stanley Cup Finals over Vancouver Canucks. The Curse of 1940 is dead. This came after winning a double-overtime Game 7 of the NHL Eastern Conference Finals on a goal by Stephane Matteau against...

2000 New Jersey Devils: Won NHL East Finals over Philadelphia Flyers, on the road, to complete a 3-games-to-1 comeback. This was when Scott Stevens introduced Eric Lindros to Mr. Shoulder.

2004 New York Yankees: Lost ALCS to Boston Red Sox, at home. The Curse of the Bambino is dead.

2009 New Jersey Devils: Lost NHL East Quarterfinals to Carolina Hurricanes, at home. Aside from the Matteau Game, this was the most shocking defeat in Devils history: Blew a 3-2 lead with a minute and a half left and lost 4-3.

Who would've thought that the Rangers, legendary losers and choke artists, would have the best record in Game 7s? In fact, they're the only NYTSA team over .500 in this regard!
Posted by Uncle Mike at 10:43 AM

In regards to the Rangers record, heard a stat that the Rangers have never lost a Game 7 of any series at home...And interesting note of the 75 Islanders series, of course it's been well documented that they won the series over Pittsburgh after trailing 3 games to None--In the series against Philadelphia that followed, they nearly repeated the feat, forcing a seventh game after trailing 3-0. As for that 2004 ALCS, for the past seven and a half years I've done all I could to erase that from my memory...)