The Yankees begin a 3-game series against the Boston Red Sox at Fenway Park this afternoon.

The Sox featured future Hall-of-Famers Tris Speaker and Harry Hooper; the Yankees' most notable player was the controversial Hal Chase, whose malfeasance meant that, despite being a decent hitter (.291 lifetime batting average and 112 OPS+) and, allegedly, the best-fielding 1st baseman of his era (which made his frequent errors all the more suspicious), he will never be elected to the Hall.

The Red Sox went on to win the World Series in that first year at Fenway, defeating the New York Giants in a series honored in The First Fall Classic, a terrific book by New York Post sportswriter Mike Vaccaro. The Yankees? They lost 102 games that season, 8th and last in the American League. (They've never lost 100 games again, and only finished last twice since.)

When the Boston Braves decided they couldn't wait for their new home of Braves Field to open in 1915, and couldn't wait to get out of the inadequate South End Grounds, the Red Sox let them finish their 1914 schedule at Fenway, including the World Series. The Braves returned the favor by letting the Sox use the larger (40,000 seats) Braves Field for their home games in the 1915, '16 and '18 World Series. (In fact, the 1918 Series was played entirely at the larger crosstown ballparks: The Chicago Cubs played their home games at Comiskey Park, home of the White Sox.)

After that 1st season, the Red Sox would not play a World Series at Fenway again until 1946, losing to the St. Louis Cardinals. They would lose to the Cards again in 1967, to the Cincinnati Reds in 1975, and to the Mets in 1986, before finally winning the Series in 2004 against the Cards and in 2007 against the Colorado Rockies.

In 1960, John Updike forever linked Fenway Park with the American literary tradition when he wrote an article for The New Yorker magazine: "HUB FANS BID KID ADIEU." It told of Ted Williams' last game, hitting a home run in his last at-bat.

"Fenway Park, in Boston, is a lyric little bandbox of a ballpark," Updike wrote, and ballparks considered to be too small have been called "bandboxes" ever since. He cited Ted's home-run finale, and the fact that Ted did not tip his cap to the fans, as he had sworn never to do 20 years earlier due to his complicated relationship with them: "Gods do not answer letters." (Ted would finally do so in a ceremony in his honor at Fenway in 1991.)

Fenway, with its location in New England, the literary capital of America (and that was the case even before baseball became the national pastime), and with its eccentricities, from the 37-foot-high wall in left field (a.k.a. the Green Monster) to its mercurial fans, has lent itself as a subject to writers as diverse as John Cheever (who once said, "All literary men are Red Sox fans") and Stephen King.

The park has certainly courted controversy, from the misbehavior that got Babe Ruth sold to the Yankees for the 1920 season (it had nothing to do with then-Sox owner Harry Frazee needing money, he was hardly broke) to the refusal to racially integrate until 1959; from beanballs to the steroid use that finally ended the Sox' 86-year World Championship drought in 2004.

And there has been genuine tragedy. Harry Agganis, a local kid who'd been a quarterback and baseball star at Boston University and a Marine in the Korean War. He died from complications of pneumonia in 1955, just 26 years old, and in only his 2nd season in the major leagues.

In 1967, another local, Tony Conigliaro, was hit in the head with a pitch, and was never the same; although the Sox would win the Pennant anyway and Tony C would return to the majors with great seasons in 1969 and '70, his vision would fail, and his life went into a downward spiral that led to a debilitating heart attack in 1982 and death in 1990.

But the memories. The fielding of Speaker. The hitting of Williams and Carl Yastrzemski. The pitching of Smokey Joe Wood and Jim Lonborg. The double play combinations: Johnny Pesky and Bobby Doerr, Rico Petrocelli and Mike Andrews, Rick Burleson and now-broadcaster Jerry Remy, Spike Owen and Marty Barrett. The Carlton Fisk home run in the 1975 World Series. First the love, then the hatred, of Sox turned Yankee pitcher Roger Clemens. The Royal Rooters. The Impossible Dream. The Idiots.

Today's game begins at 3:05 PM – supposedly, the same time that the 1st game began. Both teams will wear 1912 replica uniforms, although not the heavy wool that was worn back then. There's sentimentality, and then there's insanity.

Supposedly, the Sox have invited every living Red Sox player to the game. Somehow, I doubt that there will be hundreds of players on the field for the pregame ceremonies; but, if so, it would almost certainly be the largest gathering of former MLB players ever.

For this series: Today, on YES, Ivan Nova will start for the Yankees, and Clay Buchholz for the Red Sox. Tomorrow afternoon at 4:05, on Fox, Freddy Garcia against Felix Doubront. Sunday night at 8:05, on ESPN, CC Sabathia against Daniel Bard.

Also on April 20, 1912, 100 years ago today, Navin Field opened in Detroit, on the site of Bennett Park. The Detroit Tigers defeated the Cleveland team now known as the Indians, 6-5. 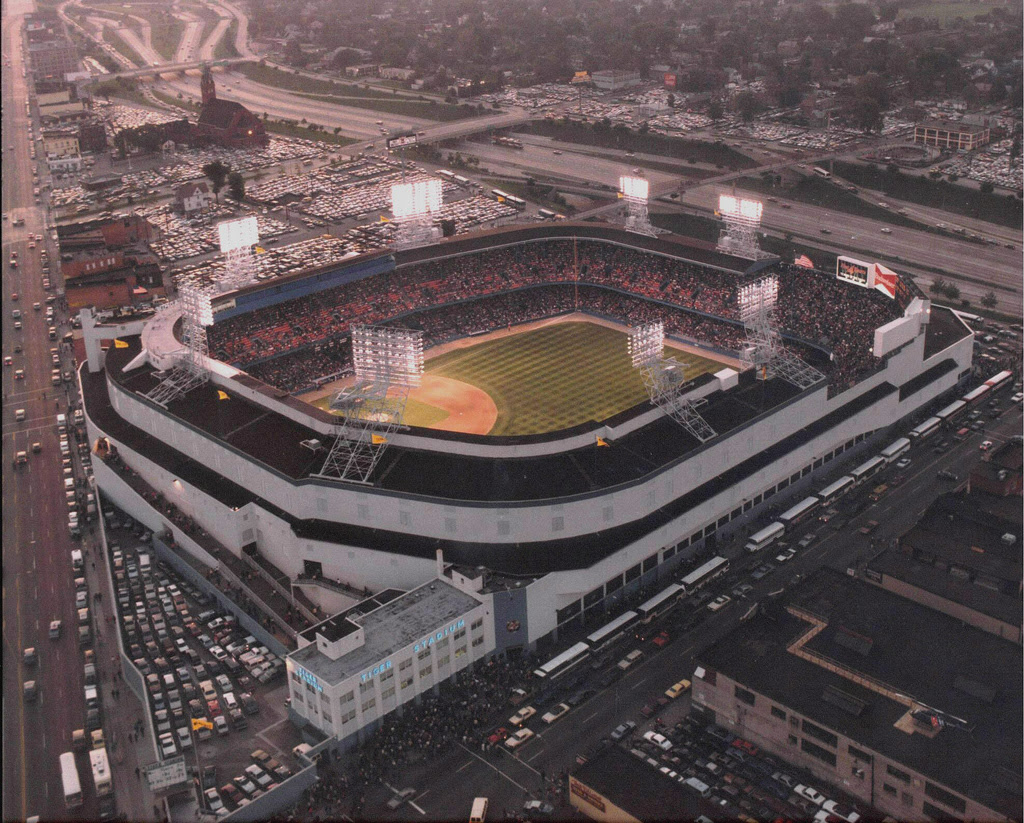 Tiger Stadium was home to Ty Cobb, Hank Greenberg, Doak Walker, Al Kaline and Kirk Gibson, and was arguably the most famous building in the State of Michigan. It was demolished in 2008. A baseball diamond has been laid out on the site, and can be played there as it has been since 1896.

Fenway is the first ballpark to reach 100 seasons, although baseball was played on the sites of Tiger Stadium and Sportsman’s Park in St. Louis for 100 years. Wrigley Field in Chicago is the oldest park in the National League (opened in 1914); the next-oldest park in each league is the Los Angeles-area park: Dodger Stadium in 1962, Angel Stadium (formerly Anaheim Stadium) in 1966.

Hopefully, the Yankees can spoil the Centennial for the little green pinball machine in Kenmore Square. Might as well give the New England fans yet another reason to feed their irrational hatred of us.

Come on you Bombers!
Posted by Uncle Mike at 1:51 PM