The Final Buzzer for the New Jersey Nets 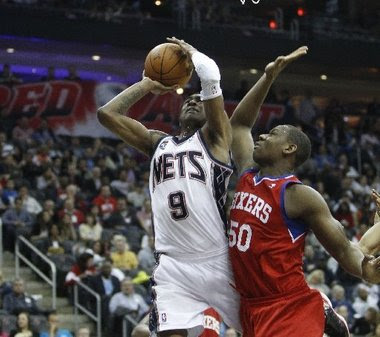 Last night, the Nets said goodbye to New Jersey with a 105-87 loss to the Philadelphia 76ers -- the team to whom they were forced to sell Julius Erving before they were allowed into the league, let alone before they ever played a regular-season game in the Garden State.

The Nets actually outscored the Sixers in the 2nd and 3rd quarters, but faded in the 4th. MarShon Brooks scored 18 to lead the team in their last Jersey game.

With the victory, the Sixers clinched a Playoff berth. That's nice... (rolleyes)

Video messages from former Nets players and coaches -- including Jason Kidd, Vince Carter and Kenyon Martin -- were played throughout the contest, while the stands were filled with fans wearing Nets jerseys both new and old.

There were 18,711 fans at the Prudential Center -- a sellout. The crowd chanted "Let's Go Nets" and "Dee-fense" for the tilt's entire 48 minutes, and it gave an appreciative round of applause as the game ended and the Nets' final seconds in New Jersey wound down.

On Thursday night, the Nets play their final game as the New Jersey Nets, away to the Toronto Raptors.

But last night's final score was a very final final.

Time of death, 9:55 PM. Cause of death: Murder, stabbed in the back by Bruce Ratner. Wound mortal, but death took 8 years.

But they could have been so much more.

Requiescat in pace.
Posted by Uncle Mike at 10:10 AM