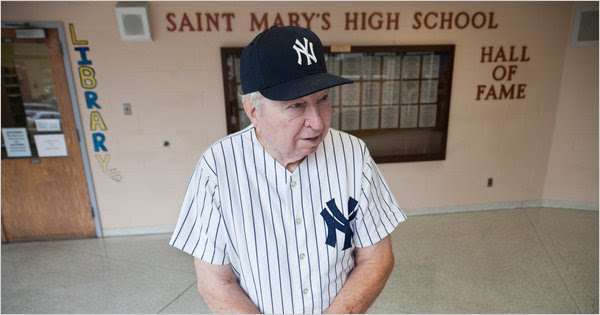 Allie Clark died on Sunday at age 88. Most of you won't remember him, but there was a time when he was, and a place where he still is, a pretty important guy.

Alfred Aloysius Clark was born on June 16, 1923, in South Amboy, New Jersey, 33 miles from Midtown Manhattan. This city (and it is, despite its diminutive size, officially listed as a "city" rather than a "township" or "borough"), of 8,000 people (which remained more or less constant throughout his lifetime) and 1.6 square miles of land -- and almost as much water, on Raritan Bay across from Staten Island -- has produced a surprising number of baseball players, and Allie Clark was the first.

He graduated from St. Mary's High School in the little city in 1941. The original building, across Stevens Avenue from the church of the same name, burned down in 1966 and was replaced by the current building, renamed Cardinal McCarrick H.S. after the Archbishop of the Diocese of Metuchen (which includes all of Middlesex County), who later was promoted to serve the Archdioceses of Newark and Washington, D.C. (Theodore McCarrick is still alive, but retired, with not a hint of scandal to his name.)

Clark was signed by the Yankees. He starred for the Norfolk Tars (a "tar" is an old name for a sailor, this team was the predecessor of today's Triple-A Norfolk Tides), a team in the Class B (by today's standards, Double-A) Piedmont League, and at the end of the season was promoted to the Newark Bears (forerunner of the current independent-league team with that name), who, along with the Kansas City Blues, were the Yankees' top-level farm teams. He was still with the Bears in 1943 when he was drafted into World War II.

After The War -- always Capital T, Capital W when speaking with people in that generation -- Clark returned to the Bears. In 1947, he did something very few people have ever done: He wore Number 3 for the New York Yankees. It would not be retired for Babe Ruth until the following year, and Cliff Mapes would be the last Yankee to wear it. (Mapes, as it turned out, would also be the last Yankee to wear Number 7 before Mickey Mantle began wearing it after Mapes was traded.)

Baseball-Reference.com does not have a play-by-play for this game, but the box score shows that Clark went 1-for-4 with an RBI. The Yankees scored 4 runs in the top of the 9th -- no indication whether Clark's RBI accounted for one -- and beat the A's, 8-5, with Allie Reynolds winning in relief of Bill Bevens. (So using Allie in relief when he wasn't starting began under the managing of Bucky Harris, not, as I previously believed, Casey Stengel.)

Clark appeared in 24 games down the stretch, batting .373 with a home run and 14 RBIs, and the Yankees won the Pennant. He played in 3 games of the World Series against the Brooklyn Dodgers, all as a pinch-hitter: He drew a walk for Vic Raschi in Game 3, lined out to short for Bobo Newsom in Game 6, and in Game 7, he batted for Yogi and singled home a run in the 6th inning of a 5-2 Yankee win. (Ironic, since, in that Series, Yogi had become the first player ever to hit a pinch-hit home run in Series play, off Ralph Branca.)

In the off-season, the Yankees traded him to the Cleveland Indians for Red Embree, an ordinary pitcher who had a good 1948 season for the club and was then traded and pitched only one more season in the majors. Clark had his best season in 1948, batting .310 with 9 homers and 38 RBIs as a reserve outfielder.

The Indians, led by shortstop and manager Lou Boudreau, second baseman Joe Gordon, third baseman Al Rosen, center fielder Larry Doby, and pitchers Bob Feller and Bob Lemon, won a tight 3-way Pennant race with the Yankees and the Boston Red Sox, and beat the Boston Braves in the Series in 6 games. Allie Clark became one of a very few players to win World Series in back-to-back seasons with 2 different teams. (Moose Skowron is another who did it with one of the teams being the Yankees.)

As it turned out, he was what we, today, would call a "Quadruple-A player": Too good for the minors, not quite good enough for the majors. The Indians didn't really have a place for him, and he ended up traded to the A's and then the Chicago White Sox, for whom he made his last big-league appearance in 1953. He had 5 good years with the Rochester Red Wings, and then closed his career with the Indianapolis Indians in 1958, at age 35. Had he been around in the expansion era, he probably would have played a bit more in the majors.

In those days, while baseball players did make quite a bit more money than the average worker, during the off-season they had to be "average workers," and Clark was an ironworker, a job he held until retiring.

He remained a pillar of the community in South Amboy, which would produce Johnny and Eddie O'Brien, baseball and basketball stars at Seattle University in the 1950s (before basketball star Elgin Baylor arrived there), who would play for the Pittsburgh Pirates, and become the only twin brothers to play for the same team in the same game. (Both went into coaching, and Eddie would be among the coaches for the ill-fated 1969 Seattle Pilots, the ragtag expansion team Jim Bouton immortalized in his diary of that season, Ball Four.)

Also from South Amboy, and future big-league coaches and-or managers, were Tom Kelly, who managed the Minnesota Twins (without the help of the O'Brien Twins) to the 1987 and 1991 World Championships; and Jack McKeon, who with the 2003 Florida Marlins became, at 72, the oldest manager (so far) to win a World Series, and was the Marlins' interim manager again last season, at age 80, second-oldest manager in history behind Connie Mack. Amazingly, until Clark died this past Sunday, all of these St. Mary's/McCarrick legends were still alive.

Just a couple of miles over, in the Parlin section of Sayreville, lived Eddie Popowski, who spent 65 years in professional baseball, all in the Red Sox organization, including a brief stint as manager in the 1970s. He was still employed by the club when he died in 2001.

With the death of Allie Clark, there are only 3 players are still alive, 65 years later, who played in the 1947 World Series, the first to have a nonwhite player, Jackie Robinson. For the Dodgers, only pitcher Ralph Branca. For the Yankees, Yogi Berra and 3rd baseman, turned cardiologist, turned President of the American League, Dr. Bobby Brown.

From the 1948 World Series, 64 years later, Clark's death leaves Al Rosen and Eddie Robinson as the only living human beings to have won a World Championship while playing for the Cleveland Indians. From the defeated Boston Braves, the only survivor is reserve outfielder Clint Conaster.

UPDATE: Allie Clark was buried in Christ Church Cemetery in South Amboy.
Posted by Uncle Mike at 9:07 AM