April 9, 1978: The Boston Celtics beat the Buffalo Braves, 131-114 at the Boston Garden. It was appropriate that they ended the regular season -- and, since neither made the NBA Playoffs, their entire season -- against each other.
The Celtics had fallen apart in the 2 years since their 1976 NBA Championship. Team owner Irv Levin wanted to move the league's most historic franchise to San Diego. The NBA wouldn't let him. So he worked out a deal with the Braves' owner, John Y. Brown: They would swap teams. Brown would keep the Celtics in Boston, but sell the team to Harry Mangurian a year later. Levin would gain control of the Braves, and move them to San Diego.
The NBA team owners approved this deal, 21-1. Commissioner Larry O'Brien refused to announce who the owner who voted against the deal was. The Braves were moved, and their name was changed to the San Diego Clippers.
After 8 years in Buffalo, including 3 Playoff berths and a Playoff round win over the Philadelphia 76ers in 1976, the Clippers did not do well in San Diego. They had a winning record in only their 1st season. Trading for the city's native son, Bill Walton, didn't help, as he was too injured to make a difference. They bottomed out at 17-65 in 1982, and were bought by Los Angeles real estate mogul Donald Sterling, who moved them to his hometown in 1984.
As the Los Angeles Clippers, they missed the Playoffs for the next 7 seasons, never won a Playoff series until 2006, didn't win another until 2012, didn't win a Division title until 2013, and the NBA forced Sterling to sell in 2014 after it came out just how much of a racist and a misogynist he is. Under the ownership of former Microsoft CEO Steve Ballmer, they've been better. But, up to this, their 51st season in the NBA, the franchise has never even reached a Conference Finals.
Sounds like Levin made a mistake in moving the Braves to San Diego. Did he?
Top 5 Reasons You Can't Blame the Buffalo Braves for Moving to San Diego
5. Western New York State. In 1970, the population of Buffalo was about 460,000 people. It seemed like it was still a big enough city to support an NFL team (the Bills), an NBA expansion team (the Braves), an NHL expansion team (the Sabres) and a Triple-A baseball team (the Bisons). 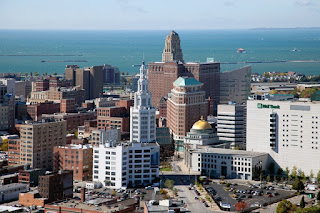 Buffalo had already lost the Basketball Association of America's Bisons in 1946. Buffalo also had a team called the Buffalo Bills in the All-America Football Conference from 1946 to 1949, but when the NFL took 3 teams from the AAFC, they took the Cleveland Browns, the Baltimore Colts and the San Francisco 49ers. It became known as "The Screwing of Buffalo."
Buffalo would gain the AFL's version of the Bills in 1960, and the NBA's Braves and the NHL's Sabres in 1970, the same year the Bills became part of the AFL-NFL merger. But the Braves moved in 1978. And the Bills and Sabres have both faced the possibility of having to move, in spite of the Sabres having a relatively new arena. Today, both are still struggling, despite both being owned by billionaires Terry and Kim Pegula.
This is matched by the other cities in Western New York. Rochester lost the NBA's Royals in 1957. Syracuse lost the NBA's Nationals in 1963. Like Syracuse, Rochester has a longtime team in minor-league hockey, the  Rochester Americans. And all 3 cities also have long had teams in baseball's Class AAA International League.
But not in the major leagues. In spite of the Toronto Blue Jays' COVID-forced tenancy at Sahlen Field last season, Buffalo hasn't had a Major League Baseball team since the 1915 Buffalo Blues -- or, if you don't count the Federal League, then the version of the Bisons that dropped out of the National League in 1885.
Today, with half a century of white flight, the population of Buffalo is more like 260,000. The metropolitan area has about 1.2 million. That would place it ahead of only New Orleans, still recovering from Hurricane Katrina, among NBA markets.
Even with the most generous possible measure, including the metropolitan areas of Rochester, Syracuse, Niagara Falls on both sides of the U.S.-Canadian border, and half of Hamilton, Ontario, it's about 3.8 million, which would rank it in the middle of the pack of every major sports league in North America (even the Canadian Football League).
Remember the movie It's a Wonderful Life? George Bailey (played by Jimmy Stewart), operator of a building and loan association, is shown what his New York State hometown of Bedford Falls would have been like if he had never been born.
He sees that the company his father had founded had gone out of business, because George wasn't there to save it; the low-income housing George had built wasn't built; Henry Potter, the miserable old man who controlled everything in town but the building and loan, had changed the town's name to Pottersville; and, like an organized crime boss, he let other businessmen do what he pleased, so long as he got his cut.
And what businesses were doing well? Bars and casinos. The very things that, today, are pretty much the only businesses doing well in New York State, thanks to the local Native tribes getting casino licenses. In 2009, at the depth of a recession, a New York Times writer pointed this out, and contrasted it with the housing market that George Bailey once ran. The writer concluded that, for the sake of the future of the State of New York, the kindhearted Bailey was wrong, and the old bastard Potter was right. (And you thought the Times was a liberal newspaper.)
Put simply, New York State, from the capital of Albany on west through Syracuse, Rochester and Buffalo, simply can't support major league sports in the modern era.
4. San Diego. In contrast, San Diego, like pretty much the entire State of California in the 1970s, was growing by leaps and bounds. The city's population had soared to over 800,000; the metro area, 1.6 million. They had MLB's Padres and the NFL's Chargers, and had recently had the San Diego Mariners in the World Hockey Association. San Diego looked like a city of the future.
Today, it's a different story. The Clippers are gone. The Chargers are gone. The city has never regained major league hockey. And the Padres would be gone if not for their 1998 Pennant leading people to vote for funding for what became Petco Park. They could well have been a city of over 3 million people with no major league sports teams.

The fact that the Braves/Clippers franchise didn't stay in San Diego, either, is a story for another time. But that's got nothing to do with whether moving out of Buffalo was a good idea.
3. The Arena Situation. The Braves and Sabres were playing in the Buffalo Memorial Auditorium. It was built in 1940, and had 16,235 cramped seats. It was also 1 of 3 arenas in the NHL -- the Boston Garden and the Chicago Stadium being the other 2 -- that had rinks shorter than the NHL standard of 200 feet: 196. It did meet than the NHL standard width of 85 feet, which those other 2 did not: Boston was 191 by 83, and Chicago was 185 by 85. 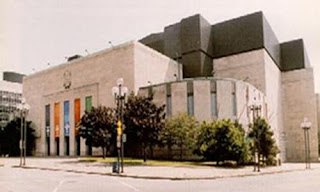 "The Aud" should never have been more than a stopgap facility for both teams. But the City of Buffalo and the County or Erie couldn't afford a new arena. This made it inevitable that either the Braves or the Sabres would have to go.
In contrast, the San Diego Sports Arena was 2,000 seats smaller, but was built in 1966, and a considerably more modern arena, with a lot more parking, and thus a lot more gameday revenue.
Today, under the name Pechanga Arena, it's considered as outdated as The Aud was in 1978. It's considered among the best smaller arenas in the country, but it just doesn't have enough regular seats, and certainly not enough luxury suites, for a present-day NBA or NHL team. 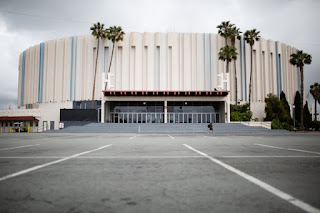 2. The NBA. It's become conventional wisdom that the league didn't yet have the star power that it would soon have. Magic Johnson and Larry Bird arrived in 1979; Isiah Thomas in 1981; Michael Jordan, Hakeem Olajuwon and Charles Barkley in 1984; Patrick Ewing in 1985.
This is garbage. In 1978, the NBA already had Kareem Abdul-Jabbar, Julius "Dr. J" Erving, Darryl "Chocolate Thunder" Dawkins, Bill Walton, Elvin "Big E" Hayes, "Pistol" Pete Maravich, David "Skywalker" Thompson, George "Iceman" Gervin, Moses Malone, on the Knicks, the veteran but still fine Earl "the Pearl" Monroe, and the former Buffalo Brave Bob McAdoo.
But the league was even worse at marketing its stars than was MLB. At their peak, the Braves had McAdoo, Ernie DiGregorio and Randy Smith. McAdoo was nearly as flashy as Dr. J., "Ernie D" was nearly as slick a mover and passer as Maravich, and Smith was as fast as anybody in the game.
It shouldn't have been that hard to make the Braves as admired a small-market team as the San Antonio Spurs became 20 years later under David Robinson and Tim Duncan, or the Cleveland Cavaliers a few years after than under LeBron James. But Larry O'Brien, once a great political operative, was a lousy Commissioner: Under his leadership, the NBA didn't know its ass from a hole in the ground. Why the league's Championship trophy is named for him, I have no idea.
1. The French Connection. No, not the 1971 movie in which Gene Hackman plays a New York cop busting up an international drug ring. Named for that movie was a forward line for the Buffalo Sabres: Gilbert Perreault at center, Rick Martin at left wing, and René Robert at right wing. They had gotten the Sabres into the Playoffs in only their 3rd season, 1972-73, and into the Stanley Cup Finals in 1975. The Sabres made the Playoffs every season from 1973 to 1985.

And with Western New York's economy crashing, fans couldn't afford 2 major league teams in the Winter. One had to go. And since there were more white people there than black people, they flocked to the hockey team, not the basketball team. Or, you could say that racism had nothing to do with it, but that the French Connection Line had more star power than McAdoo, Ernie D and Randy.
In 1996, what's now named the KeyBank Center opened, a couple of blocks from The Aud, which was demolished in 2009. Outside the new arena is a statue of the French Connection Line. There's hardly any indication that Buffalo ever had an NBA team.
VERDICT: Not Guilty. The Braves simply weren't sustainable in Buffalo.
Posted by Uncle Mike at 3:49 AM

They should name the trophy after David Stern--Stern had a lot of faults, but he was a better commissioner than O'Brien, it seems...