No Vaccine for Not Hitting 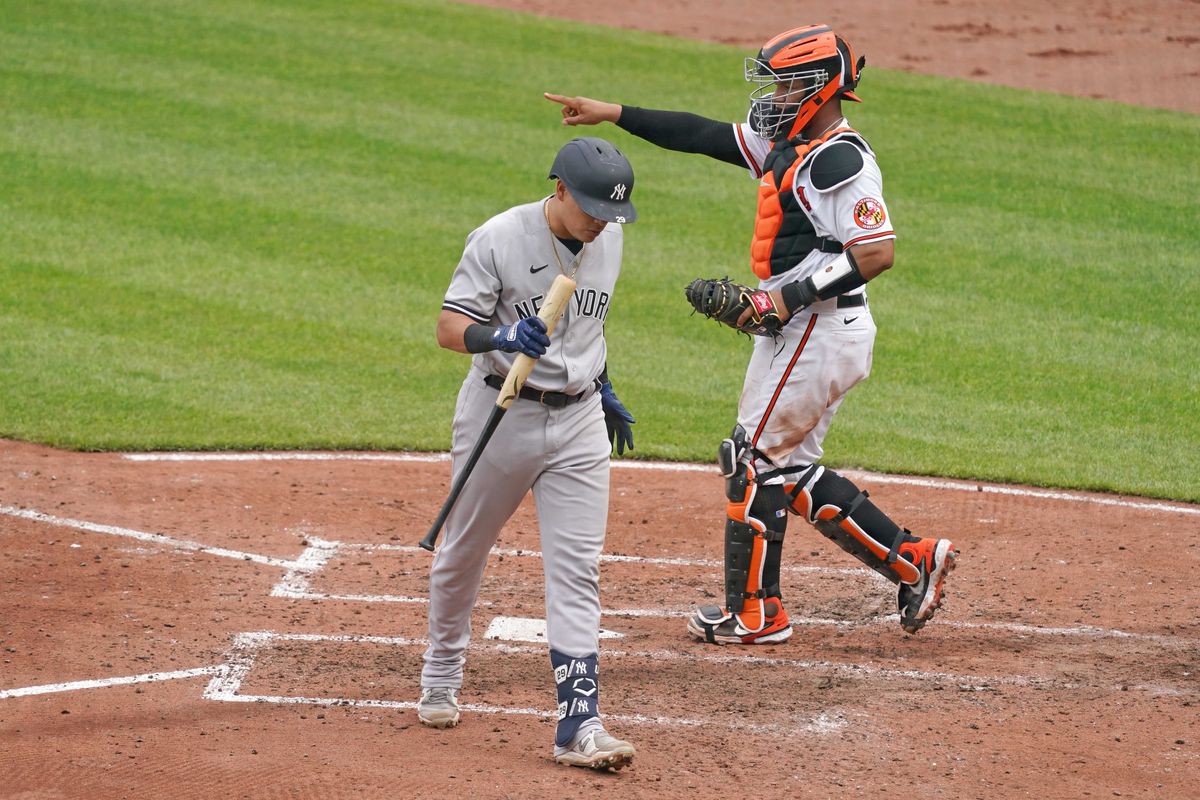 Losing is a disease, as contagious as polio. Losing is a disease, as contagious as syphilis. Losing is a disease, as contagious as the bubonic plague. Ah, but curable.
-- Dr. Knobb the psychologist (played by Peter Poth), The Natural (Set in 1939, before the development of the polio vaccine.)
Last night, I had a date with a lady named Moderna. It went well. I got another date with her, for about a month from now.
But there is no vaccine for the way the Yankees have hit in this young season -- and it ain't as young as it used to be.
Yesterday afternoon, in the finale of a 4-game visit to Camden Yards and an 8-game roadtrip, the Yankees showed that the previous night's laugher over the Baltimore Orioles was no cure.
They went down 1-2-3 on the 1st inning, wasted a 2-out walk in the 2nd, stranded 2 runners in a 2-out rally in the 3rd, and stranded 2 more in the 4th.
They trailed 1-0 going into the top of the 5th, as Jordan Montgomery was pitching well, but not quite well enough. Brett Gardner started the inning with a single, and DJ LeMahieu drew a walk.
Giancarlo Stanton was the batter. Yankee Fans could be forgiven for thinking a triple play was coming. Instead, he singled, but the dimensions of Camden Yards are such that even the speedy Gardner couldn't score.
Bases loaded, nobody out. This is where the Yankees should have broken the game wide open. But Aaron Judge was given another day off. He is looking less and less like he won't be what we thought he would be: "The Next Great Yankee." He has Mickey Mantle's power, but also his tendency toward injury.
Gleyber Torres flew out. Gio Urshela struck out. These 2 at-bats are where the game was really lost. Rougned Odor singled home 2 runs, but Aaron Hicks grounded out. It was 2-1 Yankees, but it should have been more.
Montgomery gave up a home run to tie it in the 6th. The Yankees had runners eliminated by double plays in the 6th and the 7th. Urshela drew a walk to lead off the top of the 8th, but no cliché here: Aaron Boone sent Judge up to pinch-hit, but he struck out. So did Hicks. And Gary Sanchez grounded out.
Chad Green pitched a 1-2-3 7th, but Boone didn't leave him in for the bottom of the 8th. The 1st 2 batters Darren O'Day faced walked and doubled. Now we can say it: "Cliché Alert: Walks can kill you, especially the leadoff variety."
There was little confidence in a 9th inning rally on #YankeesTwitter. Mike Ford and LeMahieu walked, but in between, Gardner struck out. After it, Stanton struck out.
Torres was up. He needed a hit, very badly. The team as a whole needed it. He got it, driving a pitch to left-center. But this is how the Yankees' luck is going: It bounced over the fence for a ground-rule double. Ford scored, but LeMahieu could only advance to 3rd. And Urshela hit a line drive that Oriole shortstop Ramon Urias caught, ending the threat.
Aroldis Chapman struck out the side in the bottom of the 9th. Enter extra innings, now the realm of Commissioner Rob Manfred's "ghost runner" rule.
Urshela started the top of the 10th on 2nd. Tyler Wade tried to do the right thing: Bunt the runner over to 3rd. But he fell behind 0-and-2, and binned again. Foul ball, meaning a strikeout.
Hicks grounded out. Sanchez was up, but instead of taking the easy out, the Orioles walked him, to fill 1st base and set up the inning-ending force play. It wasn't necessary, as Ford struck out.
Jonathan Loaisiga, one of the few bright spots this season, was brought in for the bottom of the 10th, with a runner on 2nd. The Orioles did what the Yankees tried to do in their half of the inning: Bunt the runner over, sacrifice-fly him home.
Orioles 4, Yankees 3. WP: Tanner Scott (1-2). No save. LP: Loaisiga (2-1, although it wasn't much his fault). If all you can get from a 4-game series in the Baltimore bandbox is a split, then you need to get better, and fast.
The Yankees are now 11-14, 4 1/2 games behind the Boston Red Sox in the American League Eastern Division, 4 in the loss column, with a game in hand.
The Yankees close April by starting a weekend series against the Detroit Tigers, who are off to an even worse start, 8-18. Here are the projected starting pitchers:
* Tonight, 7:05: Gerrit Cole vs. Tarik Skubal. In 13 major league games, the 24-year-old lefthanded native of the San Francisco Bay Area has a record of 1-7 with a 5.47 ERA. But he's never faced the Yankees before, and you know what that means. (It means, "Thank God this fact isn't paired with either a Saturday afternoon game on Fox or a Sunday night game in ESPN, or the Yankees would be lose for sure, even with Cole on the mound.")
* Tomorrow, 1:05: Jameson Taillon vs. Spencer Turnbull. His name sounds like that of a soap opera character, and you know what that means. (See the preceding answer, minus the Cole reference.)
* Sunday, 1:05: Corey Kluber vs. Jose Urena.
Then, the Yankees have Monday off -- and then the Houston Astros come to town. Domingo German will start the opener. There's a lot to prove in that series, especially for German, who was not available for the 2019 AL Championship Series, and could have made all the difference in it.
Posted by Uncle Mike at 12:39 PM