The Yankees went into the finale of their weekend series away to the Tampa Bay Rays at 3-5. Things were looking very bad. Another loss, producing a sweep, might have induced panic.
Who knows: Maybe panic is what this team needs.
Jordan Montgomery took the mound, and his 2nd start of the season wasn't nearly as good as his 1st. The pattern for the Yankees has been to fall behind early and never catch up. They fell behind early again, as "Gumby" allowed 4 runs in 5 innings, on home runs by Mike Zunino in the 2nd inning and Randy Arozarena in the 3rd.
This time, though, the Yankees also scored relatively early. Cliche Alert: Walks can kill you, especially the leadoff variety. Gary Sanchez led off the top of the 3rd by drawing a walk against Rays pitcher Michael Wacha, and Gio Urshela followed this with a home run, to tie the game at 2-2.
Brett Gardner singled, DJ LeMahieu doubled, and Aaron Judge drew a walk. Bases loaded, nobody out. Aaron Hicks grounded to 2nd, resulting in a double play, but it got Gardner home to give the Yankees a 3-2 lead. But Giancarlo Stanton grounded to 3rd to end the inning.
Arozarena's homer put the Rays back on top, 4-3. The Yankees wasted a leadoff walk by Gleyber Torres in the 4th, and loaded the bases with 1 out in the 7th before LeMahieu grounded into a double play. Chad Green replaced Montgomery after one of those troublesome leadoff walks in the 6th. He faced 6 batters and got them all out, making him possibly the most important player in this game.
Then came the top of the 8th. The Yankees got another of those potentially fatal lead off walks. In fact, the oft-struck-out Judge and Stanton both drew walks in the inning, sandwiching a flyout by Hicks. Mike Tauchman was sent into to pinch-run for Stanton. And Torres, who really needed to start delivering, did, his single bringing home Judge and tying the game, sending Tauchman to 2nd.
Up came the newly-acquired Rougned Odor -- pronounced "ROOG-ned Oh-DOOR." The 27-year-old 2nd baseman from Maracaibo, Venezuela, previously best known for punching Toronto Blue Jays slugger Jose Bautista, had been known as a power hitter with some speed for the Texas Rangers, but struck out way too much.
Having shaved his huge beard (and now, you notice just how much his ears stick out), he sounds like a typical Brian Cashman acquisition -- with one key difference: He bats lefthanded. He might be exactly what the Yankees need.
Not in the top of the 8th inning yesterday, though: He popped up to 3rd. Sanchez ended the inning by flying to right.
Darren O'Day pitched a perfect bottom of the 8th for the Yankees. Aaron Boone did something neither Joe Torre nor Joe Girardi liked doing: He brought his closer in to pitch the 9th inning with the game tied. Aroldis Chapman struck out the side, but it wasn't that simple: He was a bit wild, and he allowed a double to Zunino.
On to extra innings, and starting the inning with what's become known as "the ghost runner": The player who made the last out in the previous inning. That rule has already hurt the Yankees this season, as it had last season, and hasn't seemed to help much.
On December 1, 1972, ABC aired an episode of The Odd Couple where Felix Unger and Oscar Madison went on the game show Password. That show always had 2 teams of 2: A regular person, and a celebrity to help them. The host was Allen Ludden, and, often, one of the celebrities would by his wife, Betty White. (Yes, that Betty White.)
Within the fictional universe of The Odd Couple, it turned out that Ludden was a big fan of Oscar's newspaper sports column, and offered him a slot as a celebrity contestant. Oscar wasn't a fan of the show, but Felix was. So, since Ludden was willing to do something nice for him, he asked if Felix could be his contestant partner, and Ludden agreed.
But as much as Felix loved the game, he was lousy at it. Not only did he give weird responses to Oscar's clues, he gave even weirder clues. When the password was "Bird," Felix said, "Aristophanes." Aristophanes was a playwright in the Golden Age of Anicent Greece, and one of his plays was a satire titled The Birds. Felix had a classical education, and knew this. Oscar worked his way up as a kid from the streets, and didn't know this. But Felix didn't know that, and blew it.
During the commercial break, Oscar told Felix, "No more Greek clues! Aristophanes is ridiculous!" When they came back, the next password was "ridiculous."
Ludden: "Oscar, play or pass?"
Oscar: "Oh, I'm gonna play, Allen." (Glares at Felix, and says, through gritted teeth.) "Aristophanes."
Felix, getting it: "Ridiculous!" 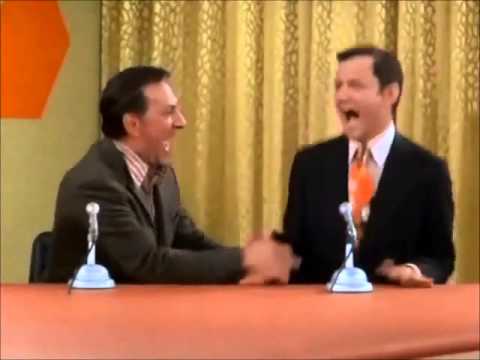 Jack Klugman as Oscar (left), and Tony Randall as Felix
Having pulled off perhaps the most telegraphed punch in TV history, they won the round, but, ultimately, lost the game.
I call the "ghost runner" rule The Aristophanes Rule. It's ridiculous!
Nevertheless... Judge began the top of the 10th on 2nd base. He has good speed for a man his size. Rays reliever Collin McHugh made the mistake of hitting Hicks with a pitch. So that's men on 1st and 2nd with nobody out. Obviously, the strategy here is to bunt. And Tauchman laid down a good one. Now, it's men on 2nd and 3rd with 1 out. A fly ball gets home a run, and a single may get home 2.
But not if you ground back to the shortstop. That's what Torres did, and Judge was thrown out at home on a force play. Now, it was 1st and 3rd with 2 out.
The batter was Odor. With a 2nd chance to be the big hero, he was, with a Texas Leaguer to center that scored Hicks. Sanchez singled to center, scoring Torres.
What's better than insurance runs? More insurance runs. Urshela singled to right, to score Odor. Manuel Margot, in right field for Tampa Bay, botched it, and that allowed Sanchez to score. Gardner struck out. Cliche Alert: But the damage is done. Rookie Albert Abreu pitched a perfect bottom of the 10th, stranding the ghost runner.
Yankees 8, Rays 4. WP: Chapman (1-0). No save: Abreu came in with a 4-run lead. If you're going to have the ghost runner, maybe holding a 4-run lead is worthy of being given a save. LP: McHugh (0-1)
The Yankees remain in the Tampa Bay area. Due to COVID restrictions, the Toronto Blue Jays are still unable to play home games in Toronto. Last season, they played them in the big U.S. city closest to Toronto: Buffalo, New York.
This season, they may end up being able to play some home games in Toronto later on. But they can't play them in Buffalo: The city decided that Sahlen Field needed upgrades to really be ready for major league games, in case it was needed for such again.
So the Class AAA Buffalo Bisons will be playing their home games this season in... Trenton, New Jersey, making Trenton, previously home to the Class AA Trenton Thunder, and now home to a "collegiate league" team of the same name, the highest-ranking baseball city in New Jersey since the Brooklyn Dodgers played games in Jersey City in 1956 and 1957.
And Buffalo is out as a location for the Jays. And no other major league team was willing to groundshare with them. So the Jays are playing games at their Spring Training facility: TD Ballpark in Dunedin, 24 miles west of downtown Tampa, and 24 miles northwest of Tropicana field. (At least the name has a slight connection: TD stands for Toronto-Dominion, a bank whose name is also on the ballpark of the Yankees' new Class AA affiliate, the Somerset Patriots, and the new Boston Garden.) 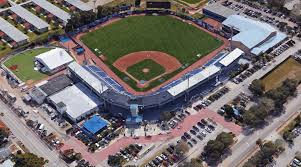 TD Ballpark seats 8,500 people. This makes it the smallest ballpark in which the Yankees have played a regular-season game since 1908, when Sportsman's Park in St. Louis seated only 8,000, and was replaced the next year by the 31,000-seat stadium that would serve St. Louis baseball until 1966.
Posted by Uncle Mike at 12:25 PM