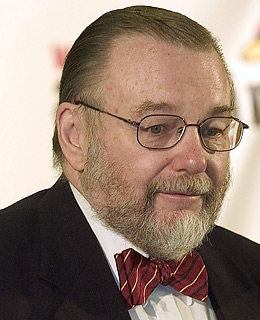 December 13, 1987: The St. Louis Cardinals football team beats the New York Giants, 27-24 at Busch Memorial Stadium in downtown St. Louis. A rumor is going around that the team will be moved, and one kid in the stands holds up a sign saying, "DEAR SANTA PLEASE DON'T LET THEM TAKE MY TEAM."
The Big Red -- the football Cardinals were often called that to differentiate themselves from the baseball Cardinals, a.k.a. the Redbirds -- play 2 more games that season, beating the Buccaneers in Tampa and losing to the Cowboys in Dallas, finishing 7-8.
March 15, 1988: Cardinals owner William V. Bidwill makes it official: After 28 seasons in the Gateway City, the NFL's Cardinals are being moved to the Phoenix area. They become the Phoenix Cardinals, and will groundshare with Arizona State University at Sun Devil Stadium on their campus in Tempe.
September 4, 1988: The Cardinals play their 1st game as a Phoenix team, losing to the Cincinnati Bengals, 21-14 at Riverfront Stadium.
September 12, 1988: The Phoenix Cardinals play their 1st home game, losing to the Dallas Cowboys, 17-14 at Sun Devil Stadium. They finish 7-9, but 6 of their losses are by 10 points or less.
In 1994, to broaden their fanbase, Bill Bidwill changes the team's name to the Arizona Cardinals. In 2006, he moves the team to the new University of Phoenix Stadium in suburban Glendale. In 2018, the stadium is renamed State Farm Stadium.
Was this just another greed-fueled sports team move? Or was it the right thing to do?
Top 5 Reasons You Can't Blame Bill Bidwill for Moving the St. Louis Cardinals to Arizona
5. Identity. St. Louis was not the Cardinals' 1st home. They played in Chicago from 1920 to 1959. But the City of the Big Shoulders had completely lost interest in them. In their last season, they averaged 28,425 fans per home game. Take out their game against the crosstown Bears, and it dropped to 21,671. They actually moved 2 "home games" to Minneapolis, in consideration of moving there.
Even in 1948, when they were defending NFL Champions, and went 11-1, still the franchise's best regular season ever, they averaged only 29,918 fans at Comiskey Park -- 25,347 in games not against Da Bears, whose George Halas-fueled promotion machine ultimately led Bidwill's mother, Violet Bidwill Wolfner, the NFL's 1st female owner, to move the team to St. Louis.
But St. Louis never really took to them, either. Groundsharing with the baseball Cardinals, first at Sportsman's Park and then at Busch Memorial Stadium from 1966 onward, they still never had great attendance. Even when they were winning back-to-back NFC East titles in 1974 and '75, they struggled to get 50,000 fans per home game.
Throw in the fact that Bidwill himself was born and raised in Chicago, not St. Louis, and his ties to the latter city simply weren't very strong. The Cardinals hadn't done well in either city, either on the field or at the box office.
4. The Stadium Situation. Busch Memorial Stadium was one of the multipurpose ovals built in the 1960s and '70s, which by necessity produced sight lines that, beyond the movable stands at field level, were not very good for football and terrible for baseball. 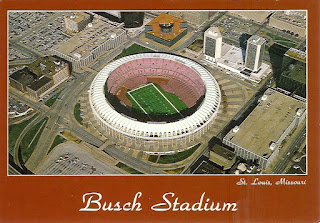 Since their move to Arizona, they have played at 2 different stadiums that were built football-specific. True, they first had to share Sun Devil Stadium with Arizona State. But they didn't have to share it with a baseball team.
3. St. Louis Is Not a Football Town. In 1995, they got the Rams to replace the Cardinals, and except for their Playoff run of 1999 to 2004, they didn't do a whole lot better, despite a new domed stadium. In 2014, the Rams averaged 57,018 fans per home game. Only the Minnesota Vikings did worse, and that was because they were groundsharing with the University of Minnesota while a new stadium was built on the site of the Metrodome. UM's stadium only seats a shade over 52,000 people, so the Vikings could have sold many more seats.
In 2015, the Rams did even worse than the Vikings: 52,402. They only filled the Edward Jones Dome to 80 percent of capacity. The next-worst in the NFL was the Raiders, who only got the Oakland Coliseum 86 percent filled.

To make matters worse, St. Louis-area fans didn't even seem to care that the team was leaving. In October 2015, the NFL owners met at a St. Louis hotel. With the threat of moving to L.A. having hung in the air pretty much for Kroenke's entire 5-year ownership, meaning a move would not have surprised anyone, how many fans showed up to tell the owners not to approve the move? About 1,500. That's right: One thousand, five hundred. I've been to high school soccer games with bigger crowds. And that's the biggest protest I could find on Google.

(The NFL owners voted 30 to 2 to allow the move. Even Alex Spanos of the San Diego Chargers, who also wants to move to L.A., possibly to share the Inglewood stadium with the Rams, voted for it. The only ones to vote against it? Understandably, Mark Davis of the Raiders. Less understandably, Mike Brown of the Cincinnati Bengals: Apparently, he thinks that the Rams being in L.A. will mean less money for team owners.)

St. Louis is not a pro football town. Busch Memorial Stadium seated about 54,000 for football, but the Cardinals played there from 1966 to 1987, and -- with brief exceptions in the mid-1970s and early 1980s when the Cards made the Playoffs -- they didn't fill it then, either. The Cards moved to Arizona, and even when they couldn't get 50,000 into Sun Devil Stadium (let alone the 64,000 that now regularly fills the University of Phoenix Stadium), Bill Bidwill never regretted the move. 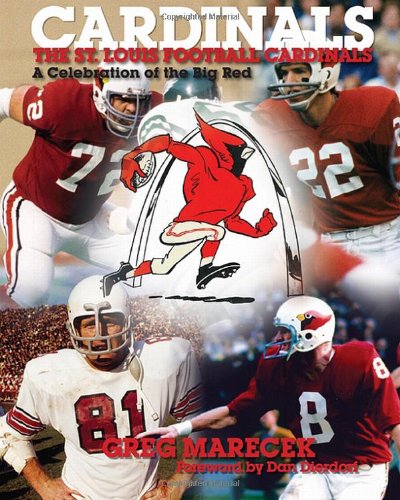 Top row, left to right: Dan Dierdorf and Roger Wehrli.
Bottom row, left to right: Jackie Smith and Larry Wilson.
Are 4 are in the Pro Football Hall of Fame, but none
reached an NFL or NFC Championship Game with St. Louis.
St. Louis is not a college football town, either. The University of Missouri's Faurot Field is 126 miles from the Edward Jones Dome. And that's the closest Football Bowl Subdivision (formerly known as Division I-A) school to St. Louis. The next-closest such team is the University of Illinois (which, of course, is not in Missouri), and their Memorial Stadium is 173 miles away.

Nor is St. Louis known for producing great football players. Go ahead: Name a great football player who came from within a 50-mile radius of the Gateway Arch. The best is Kellen Winslow, the great tight end of the San Diego Chargers. The next-best is probably Jimmy Conzelman, a St. Louis native who played at the city's Washington University, and won an NFL Championship. You might not have heard of him, because that title was with the 1928 Providence Steam Roller (who went out of business 3 years later). He coached the Cardinals to the 1947 title and the 1948 title game, but that was in Chicago, not St. Louis. And he's been dead since 1970.

In other words, St. Louis' greatest football products are a guy who peaked in Ronald Reagan's 1st term, and is now 63 years old; and a guy who has been irrelevant in the game since Harry Truman was President, and dead since Richard Nixon's 1st term. Go ahead: Name another great football player from St. Louis and environs. I can't.

St. Louis is not a football town.
2. Phoenix Is a Football Town. Arizona State draws well. So does the University of Arizona, although that's in Tucson, 113 miles to the southeast. The Fiesta Bowl sells out every New Year's Day (or thereabouts). 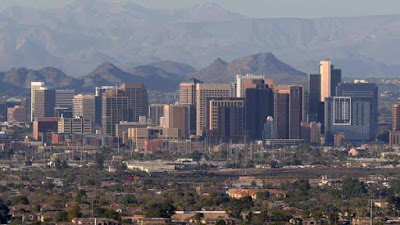 Okay, the Cardinals had seat-filling issues at first. The only sellouts they had at Sun Devil Stadium were when they played the Cowboys, and then there were so many Cowboy fans, they took over and made it feel like an away game for the Cards. But since State Farm Stadium opened, and the Cards had first dibs, fans have come out in droves. State Farm Stadium, sold out.
1. The Market. Look at market size. The Phoenix metropolitan area has 4.8 million people. Contrast that with St. Louis: They have just 2.9 million. Portland, Oregon and Orlando, Florida don't have NFL teams, and their metro areas have more people than St. Louis. Sacramento isn't far behind in terms of metro area population, and they've had trouble holding onto just 1 team, the NBA's Kings.
St. Louis also has Major League Baseball's Cardinals, who are by far the most popular team in town; and the NHL's Blues, who are more popular in St. Louis and its vicinity than either the Cardinals or the Rams were when they were in St. Louis.
The baseball Cardinals are a beloved, iconic franchise, backed by enough money to overcome any "small market" issues. The Blues are doing very well at the box office, and have a recent World Championship to their name (2019). Both of those teams have venues that they own, control, and sell out on a regular basis. They're not going anywhere. And St. Louis is getting a Major League Soccer team, finally acknowledging the city's contribution to American soccer history.

But St. Louis lost the NBA's Hawks to Atlanta in 1968, right after getting the Blues, proving they couldn't hold 4 major league teams. They lost the football Cardinals in 1987, and have now lost the Rams, proving yet again that they can't even hold 3 major league teams. And while Major League Soccer is looking to expand, and is in such small markets as Portland, Orlando and Salt Lake City, they are not seriously looking at St. Louis, despite its deep roots in American soccer history (5 members of the legendary 1950 World Cup team came from there).

Somebody recently said, "How bad can St. Louis be, if it can produce Yogi Berra?" Good question. I'm not saying that it's a bad city. But it's not a big market, and it's just not a football town. Arizona is both, and the Cardinals have done better there.
VERDICT: Not Guilty. Bill Bidwill may have been a bad owner in competitive terms: He was the controlling owner of the Cardinal football franchise for 57 years, 1962 to 2019, and only once did he get to an NFL championship game, under any name, and lost it. But moving the team from St. Louis to Arizona was the right thing to do.
Posted by Uncle Mike at 7:34 PM