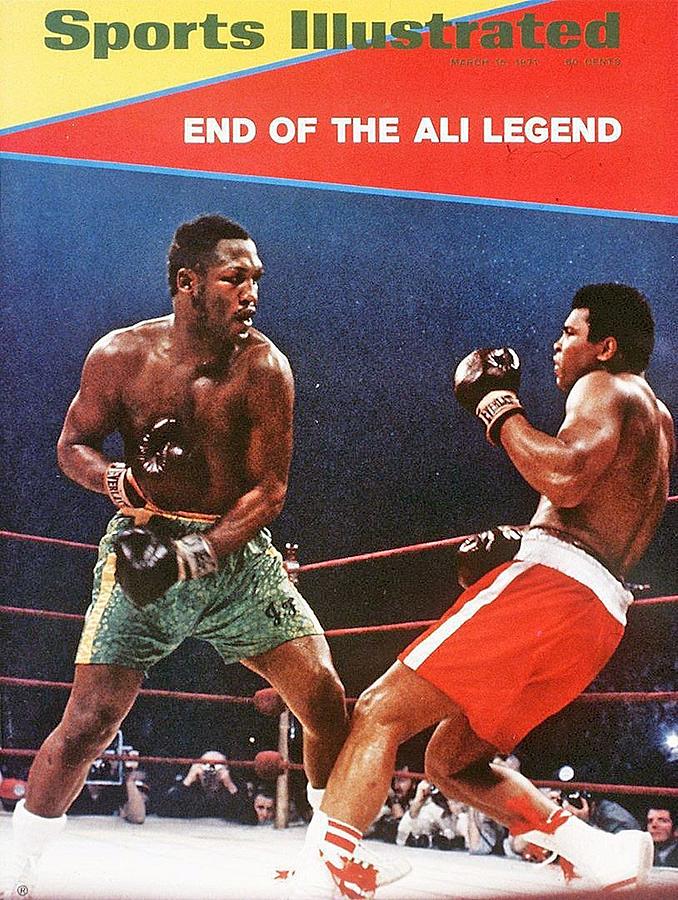 March 8, 1971, 50 years ago: For the 1st time -- and, so far, for the last time -- 2 men who were undefeated and, at least officially, undisputed Heavyweight Champions had faced each other in the ring. Of course, it had to be at the Garden. It was March 8, 1971. Like many others, it was billed as The Fight of the Century. It was also called The Super Fight. It was also called simply The Fight.
Muhammad Ali had won a Gold Medal for America in the 1960 Olympics in Rome, and had won the Heavyweight Title on February 25, 1964, beating Sonny Liston in Miami Beach. Shortly thereafter, he converted to Islam and changed his name, which had been Cassius Clay. He won a rematch with Liston, and defeated anyone and anyone challenging him, including former Heavyweight Champion Floyd Patterson.
But on April 29, 1967, he was drafted into the U.S. Army. He reported for induction, and refused to accept it. He was immediately indicted for draft evasion. His boxing license was subsequently suspended, and he was stripped of the title. He would be convicted, but appealed the decision. It went all the way to the Supreme Court of the United States, where it was overturned in a unanimous vote. However, that wouldn't happen until nearly 4 months after The Super Fight.
In the meantime, Joe Frazier, who had won a Gold Medal at the 1964 Olympics in Tokyo, had won a piece of the title on March 4, 1968, having beaten the other major contender, Buster Mathis, at the new Madison Square Garden. (The replacement for "the old Garden" really was new, having opened on February 11.) On February 16, 1970, Frazier unified the title by beating the holder of its other pieces, Jimmy Ellis.
Ali received a new boxing license, and on October 26, 1970, in Atlanta, knocked out Jerry Quarry in his 1st fight back. On December 7, he knocked out Oscar Bonavena at The Garden. In hindsight, the Louisville Lip should have had at least one more tuneup fight before taking on Smokin' Joe.
Neither man had ever lost a professional fight: Ali went into the fight 31-0; Frazier, 26-0. Of course, it had to be held at The Garden: Like its predecessor arena, it was billed as "The Mecca of Boxing." (I don't know what Ali, a Muslim, thought about that nickname.)
How big was this fight? How tough a ticket was it? Frank Sinatra, the biggest living name in entertainment, and a great fan of sports, especially boxing, couldn't get a ticket. So he made arrangements to be Life magazine's official photographer for the fight.
Most of the fight was even. But as it went on, Ali's rustiness began to show. In the 15th and final scheduled round, Frazier's famed left hook knocked Ali down, the 1st time he'd been knocked down since Henry Cooper did it at Wembley 8 years earlier. He got right back up, but it was too late: The knockdown was enough to give Frazier a unanimous decision, and the undisputed title.

Sports Illustrated would put the knockdown on their cover, and used the headline "END OF THE ALI LEGEND."

Well, that time, "The Dreaded SI Cover Jinx" fell on SI itself. Ali stayed in the ring on a regular basis, winning 10 straight fights, until fighting Ken Norton in San Diego in 1973. Norton broke Ali's jaw -- "Perhaps poetic justice," as his frenemy Howard Cosell would say -- and won a split decision. Undeterred, Ali fought Norton again, 6 months later at the Forum outside Los Angeles. Again, it was a split decision. This time, it went in Ali's favor.
And then he fought Frazier a 2nd time, also at the Garden. After 12 rounds, he won a unanimous decision. Except Frazier was no longer Champion: On January 22, 1973, in Kingston, Jamaica, he had been knocked out by George Foreman, who had won the Gold Medal at the 1968 Olympics in Mexico City. Foreman then knocked out Norton, the only other man to have beaten Ali.
A fight between Ali and Foreman was set up, and some people thought Foreman was going to kill Ali. Not just beat him, but possibly end his life. On October 30, 1974, in Kinshasa, the capital of the African nation of Zaire (now the Democratic Republic of the Congo), in a fight known as "The Rumble in the Jungle," Ali fooled everybody, and knocked Foreman out.
On October 1, 1975, he fought Frazier for a 3rd time, in the Philippines, in a fight known as "The Thrilla in Manila." Frazier hit Ali so hard, Ali told his trainer Angelo Dundee that the 9th round was the closest he had ever come to death. But Ali rallied, knocking Frazier's mouthpiece out in the 13th, and absolutely pummeling him in the 13th and 14th rounds.
Frazier's trainer Eddie Futch was afraid his man would get badly hurt if he fought a 15th round, so he stopped it. Ali stood to receive the cheers of the crowd, and collapsed. Both men should have retired for good after that fight. Neither did.
In 1988, Michael Spinks was 31-0, and held the IBF version of the Heavyweight Title. Mike Tyson was 34-0, and held the WBA and WBC versions. Both were undefeated, but the title was split, so it wasn't undisputed. This is the closest a fight has since come to the 1971 Super Fight. The fight was held at Boardwalk Hall in Atlantic City, and Tyson knocked Spinks out midway through the 1st round. Spinks never fought again.
*
March 8, 1971 was a Monday. It was during the NFL's off-season, and baseball was in Spring Training, so there were no games scheduled for either sport. The NHL regular season was approaching its climax, but that League didn't schedule any games for that day, either.
There were, however, 2 games in the NBA that night, and 1 in the American Basketball Association:
* The Milwaukee Bucks beat the Seattle SuperSonics, 104-99 at the MECCA.
* In a battle of 1st-year expansion franchises, the Buffalo Braves beat the Portland Trail Blazers, 114-98 at the Portland Memorial Coliseum.
* And in the ABA, the Indiana Pacers beat the Carolina Cougars, 118-105 in Indianapolis.
Posted by Uncle Mike at 12:00 AM

With regards to Ali's stance on Vietnam, while it was controversial, I like the fact that he was willing to stand up and take whatever punishment for doing what he felt was right in not serving in Vietnam...

Now, with regards to Jane Fonda's going to North Vietnam (as it was known at the time)...yeah, that was a bad decision, to put it mildly...