The More They Stay the Same 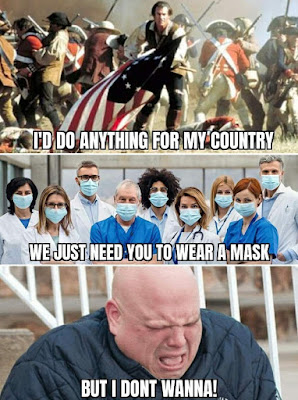 March 11, 2020, 1 year ago: The COVID-19 epidemic begins, at least in the American mind. The disease had already been around for a while, probably around 3 months, and we'd been hearing about it for over 1 month. But this was the day that it hit home:
* The World Health Organization officially declared it a "pandemic," meaning "an epidemic of an infectious disease that has spread across a large region, for instance multiple continents or worldwide, affecting a substantial number of people."
* Husband & wife actors Tom Hanks and Rita Wilson announced that they tested positive for the virus. They ended up recovering, but we didn't yet know that they would.
* The National Basketball Association (NBA) shut down, and wouldn't resume until July 30, "inside a bubble" outside Orlando. Within hours, the National Hockey League (NHL) followed suit. Then, Major League Baseball (MLB). Then, the National Collegiate Athletic Association (NCAA) canceled both its men's and women's national tournaments outright. And Arsenal Football Club revealed that manager Mikel Arteta tested positive. The Premier League suspended its season shortly thereafter. In America, Major League Soccer (MLS) waited a little longer to do so.
The NBA, the NHL, MLB, MLS and the PL resumed their seasons under severe restrictions. The NCAA did not, and just started a new season, more or less on time in November.
That day, somebody on Twitter wrote, "Today was like if (Billy Joel's song) 'We Didn't Start the Fire' was a day." And someone responded:

Schools close, Tom Hanks, trouble in the big banks
no vaccine, quarantine, no more toilet paper seen.
Travel ban, Weinstein, panic COVID-19
NBA, gone away, what else do I have to sayyyyyy
*
I wrote this on March 12, having no idea at the time that the disease would kill at least 181 "9/11s":
The Coronavirus, a.k.a. COVID-19, has, thus far, killed about as many Americans as our worst mass shootings. That number could rise to more than the 3,000 or so that were killed on 9/11.

That's the best-case scenario. What might happen if we had a government that gave a damn about its citizens. We don't. Donald Trump only cares about himself, so he's going to do whatever he thinks it will take to keep him in the White House and out of prison. And he has botched this thing six ways to Sunday.

And the stock market, the one thing that had been saving Trump, giving him free rein to say, "Re-elect me because the economy is great," is in free-fall. It's lost a net 4,600 points in the last 4 trading days -- and that includes a 900-point gain on Monday.

Actor Tom Hanks, and his wife, actress Rita Wilson, were in Australia, and feeling a little under the weather. They got tested. They've got it.

There has been some panic, and the idea of Hanks, one of America's most beloved actors, having this disease has freaked some people out. The scientists say that of the people who get it, maybe 2 or 3 percent will die, most of them older people and/or those with compromised immune systems. In other words, if you get it, you may feel lousy for a few days, but you probably won't die because of it. In this one way, it is like the flu, although it may take longer to run its course.

Thus far, New Jersey has reflected this: As of this writing, a little before 1:00 PM on Thursday, March 12, we have about 25 cases, but only 1 death, a 69-year-old man. Most schools in New Jersey are closed, and other States are likely to follow.

Last night, Trump gave a speech from the Oval Office, contradicting his earlier claims that the virus was a hoax to make him look bad and would go away quickly.

But in that speech, his face was oranger and puffier than usual, his right eye was squinting as if he couldn't read the teleprompter (an activity he had mocked Barack Obama for), he slurred some words (twice in a space of 30 seconds, he turned the word "relief" into "reliff"), and gave the impression that he was either sick or on drugs (Adderall is the most-rumored one)...

Think about this: This NBA season has seen the collapse of the league's most recent quasi-dynasty, the Golden State Warriors; season-long, or nearly so, injuries to superstars Steph Curry and Kevin Durant; the injury-delayed arrival of super rookie Zion Williamson; and the death of league legend Kobe Bryant -- and none of those stories is the biggest story of the season. The biggest story of the season is that we don't know if -- and, if so, how, the season will be resolved.
*
The regular season was resumed on July 30, the Playoffs began on August 15, and the season ended on October 11, when LeBron James and the Los Angeles Lakers finally claimed the Championship, 377 days after the 1st preseason game.
To put that in perspective: 38 times, baseball has played and completed its World Series before October 11, although, due to expansion, not since 1968.
Only now -- 1 year, 30 million American cases, 542,000 deaths, 3 vaccines, and, most importantly for turning the preceding around, 1 President, later -- are things beginning to show signs of hope.
No thanks to certain people, who will never accept their responsibility for taking something that was going to be bad, no matter what was done, and refusing to do what could have been done, and thus making it a whole lot worse.
The worst part of it? The COVID/Coronavirus epidemic probably had no effect on the Presidential election at all. Anybody who was going to vote for Donald Trump before it still voted for him during it. Anybody who was going to vote for the Democratic nominee, before we knew who that was going to be, was already motivated to do so by Trump's crimes and other abuses. Joe Biden won not because of anger and sadness over COVID, but because of a voter registration drive that was already underway. I don't think COVID reaction swayed a single State.
Meanwhile, as the old saying goes, "The more things change, the more they stay the same." I understand the desire to keep things as "normal," or at least as comforting, as possible under unprecedented conditions. But the same stupid and rotten people who did stupid and rotten things before the epidemic and throughout it are still doing those things.
I have no sympathy for how any of them have already suffered, or will continue to do so. I'm liberal, but I'm not that liberal.
*
The details of this countdown are dependent on COVID restrictions:
Days until the New Jersey Devils again play a local rival: 0. They're playing the New York Islanders right now, at the Prudential Center in Newark.
Days until the next Arsenal game: 3, this Sunday, at 12:30 PM New York time, home to arhc-rivals Tottenham Hotspur in a North London Derby. Today, in Europa League Round of 16 action, Arsenal beat Athens team Olympiacos 3-1 away, virtually ensuring qualification for the Quarterfinals.
Days until the next North London Derby: See the previous answer.
Days until the next game of the U.S. National Soccer Team: 17, on Sunday, March 28, an international friendly against Northern Ireland, at Windsor Park in Belfast.
Days until the New York Yankees open the 2021 season: 21, on Thursday, 1:00 PM, home to the Toronto Blue Jays. Just 3 weeks.
Days until the next New York Red Bulls game: 37, on Saturday, April 17, home to Sporting Kansas City. A little over 5 weeks.
Days until the Red Bulls again play a local rival: Unknown. MLS hasn't set the schedule beyond April.
Days until the next Yankees series against the Boston Red Sox begins: 85, on Friday, June 4, at 7:00 PM, at Yankee Stadium II. A little over 12 weeks.
Days until the COVID-delayed Euro 2020 opens: 107, on Friday, June 26. Under 4 months. Games will be played all over Europe, with the Semifinals and the Final at the new Wembley Stadium in London.
Days until the COVID-delayed 2020 Olympics open in Tokyo, Japan: 134, on Friday, July 23. Under 5 months.
Days until the next East Brunswick High School football game: 176, on Friday, September 3, at 7:00 PM, home to arch-rival Old Bridge. Under 6 months.
Days until the next East Brunswick-Old Bridge football game: See the previous answer.
Days until the next Rutgers University football game: 177, on Saturday, September 4, at 12:00 noon, home to Temple University.
Days until the next election for Governor of New Jersey and Mayor of New York City: 236, on Tuesday, November 2. Under 8 months.
Days until the next Rutgers-Penn State football game: 261, on the Saturday after Thanksgiving, November 27, at 12:00 noon, at Beaver Stadium in State College, Pennsylvania. Under 9 months.
Days until the 1st Baseball Hall of Fame election for which Alex Rodriguez and David Ortiz will be eligible, and we will know for sure whether steroid use keeps a player out, or if it's only perception that does: 320, on Tuesday, January 25, 2022. Under 11 months.
Days until the next Winter Olympics open in Beijing, China: 330, on Friday, February 4, 2022. Under 11 months.
Days until the next elections for Congress and for Governor of most States, including New York and Pennsylvania: 607, on Tuesday, November 8, 2022. Under 2 years, or under 20 months.
Days until the next World Cup opens: 620, on Friday, November 21, 2022, in Doha, Qatar. Under 2 years, or under 21 months.
Days until the next Women's World Cup opens: 851, on Friday, July 10, 2023, jointly held in the neighboring nations of Australia and New Zealand. Under 2 and a half years, or under 28 months.
Days until the next Presidential election: 1,335, on Tuesday, November 5, 2024. Under 4 years, or under 44 months.
Posted by Uncle Mike at 7:00 PM