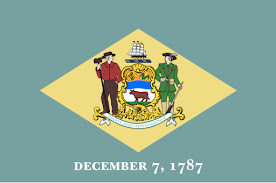 December 7, 1787: Delaware becomes the 1st State to ratify the Constitution of the United States -- making it forever "The First State."

All of these are from Wilmington, unless otherwise stated.

Honorable Mention to William "Judy" Johnson. Since Negro League records are sketchy, and he never got a chance to show what he could do in the white majors, I can't list him in the Top 10. But he is in the Baseball Hall of Fame.

Honorable Mention to Dallas Green of Newport. He wasn't much of a pitcher, although the 1964 Philadelphia Phillies' collapse cannot be blamed on him. But in 1980, he managed the Phillies to their long-awaited 1st World Series win. He became the general manager of the Chicago Cubs, and built the teams that won National League Eastern Division titles in 1984 and 1989. He later served as a consultant for the Phillies, and helped build their 2008 World Champions.

10. Val Whiting. Born in East Orange, Essex County, New Jersey, she moved to Wilmington during her school years, and became perhaps the greatest basketball player of either gender produced by Delaware. A forward, she won National Championships at Stanford University in 1990 and 1992, and was Pac-10 Player of the Year in 1992 and 1993. She played 6 seasons of pro ball, 1 in the ABL and 5 in the WNBA.

9. Vicki Huber. One of the many legends in track & field at Philadelphia's Villanova University, the middle-distance runner won the 1988-89 Honda-Broderick Cup as the best female collegiate athlete of the schoolyear. But her best Olympic performance was 6th in the 3,000 meters in 1988 in Seoul.

8. Delino DeShields of Seaford. He was good enough in high school basketball to be offered a scholarship by Villanova, but chose baseball after being drafted by the Montreal Expos. He played 13 seasons as a major league 2nd baseman, reaching the postseason with the Los Angeles Dodgers in 1995 and 1996. However, he may be best known for the Expos trading him to the Dodgers for Pedro Martinez, which may have cost the Dodgers the Pennant both times.

His son Delino DeShields Jr. is a center fielder for the Texas Rangers. His daughter Diamond DeShields played basketball at the University of Tennessee.

7. Ed Michaels. A guard, he was nearly deaf, which kept him out of World War II, but he played pro football for 11 years, including with the 1937 NFL Champion Washington Redskins.

6. Frank Shakespeare. He was the 1st Delaware resident to win an Olympic Gold Medal, in rowing in 1952 in Helsinki, Finland.

5. Dionna Harris. A 2nd baseman (basewoman?), she was the batting average leader on the U.S. team that won the Gold Medal in softball at the 1996 Olympics in Atlanta.

4. Steve Watson. A 1981 Pro Bowler, he reached Super Bowls XXI and XXII with the Denver Broncos.

3. Creighton Miller. A running back, he helped Notre Dame win the 1943 National Championship, leading the nation in rushing and finishing 4th in the Heisman Trophy voting. (His quarterback, Angelo Bertelli, won it.) Doctors told him not to play pro football because of high blood pressure. Good thing he went to law school.

Born in Cleveland, he played his high school football in Wilmington, before returning to Cleveland, coaching with the Browns' 1946 AAFC Champions, then helped found the NFL Players Association, serving as their legal counsel from 1956 until they were recognized by the NFL in 1968.

2. Vic Willis of Newark. He threw his last pitch in 1910. He was elected to the Baseball Hall of Fame in 1995. Even given that the Hall didn't hold its 1st election until 1936, that's still his 59th year of eligibility.

He was 249-205 in a 13-season big-league career. He pitched a no-hitter for the Boston Beaneaters (forerunners of the Atlanta Braves) in 1899. He led the National League in earned run average in 1899 and in strikeouts in 1902. He won the World Series with the Pittsburgh Pirates in 1909.

The Dallas Cowboys traded up to draft him, and moved him from defensive tackle to linebacker. A 9-time Pro Bowler, he helped them win Super Bowl XII, and was named Co-Most Valuable Player along with Harvey Martin. He also helped them reach Super Bowls X and XIII, and 6 NFC Championship Games.

The Cowboys don't retire numbers, and Jaylon Smith currently wears his Number 54. But they did elect him to their Ring of Honor. He was named to the College and Pro Football Halls of Fame, and the NFL's 1980s All-Decade Team.
Posted by Uncle Mike at 1:00 AM

What is your take on the possibility of the Yankees getting Stanton.

Sucks to be the Marlins fans but I'm glad the Yankees benefit from this.

The Yankees do not benefit from this. Before this trade, the Yankees needed at least 1 more starting pitcher, possibly 2. Now, they also need a 2nd baseman.