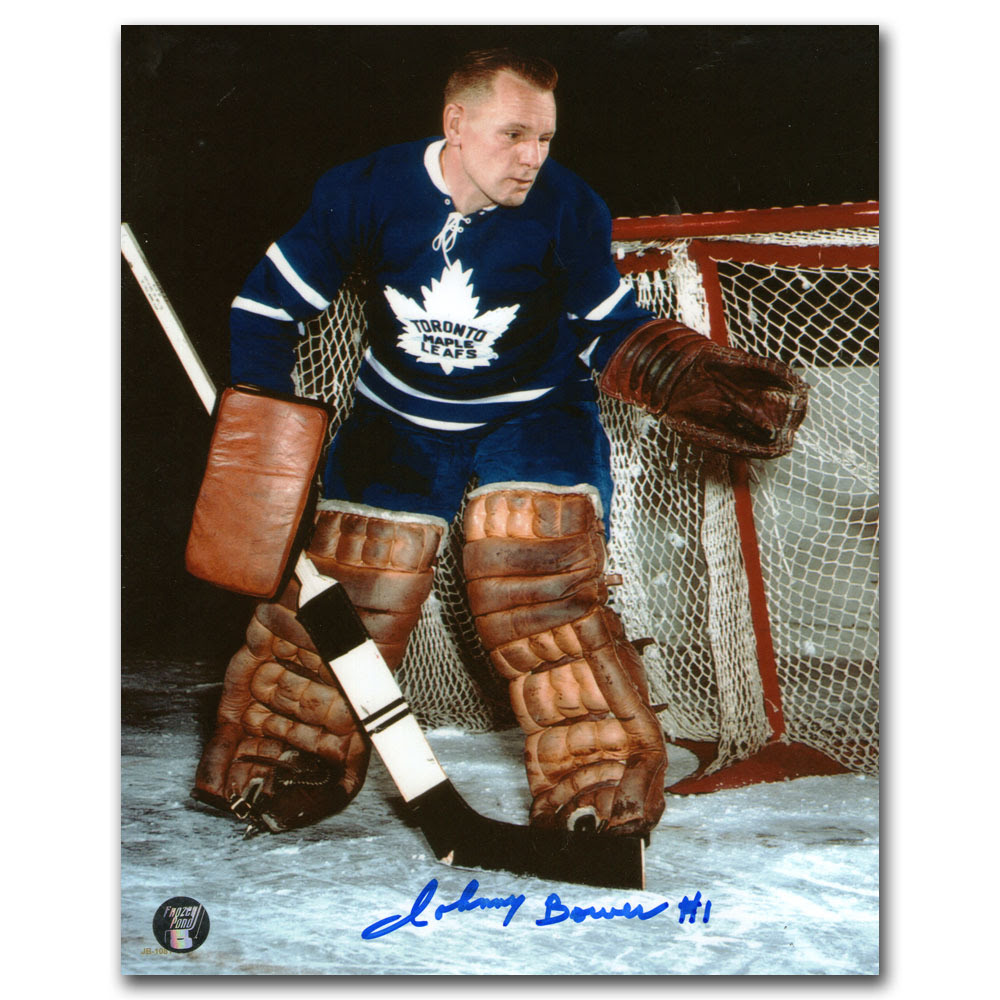 The number of living people who were a goaltender on a Toronto Maple Leafs team that won the Stanley Cup had been 1 -- the same as the man's uniform number.

John William Kiszkan was born on November 8, 1924 in Prince Albert, Saskatchewan. Or... was he? Like baseball pitcher Satchel Paige and boxer Archie Moore -- and, much later, baseball pitcher Orlando "El Duque" Hernandez -- his age was called into question.

"I joked that the town hall where the births were registered in Prince Albert burned down," he said, "and I didn't know how old I was. Somebody wrote it, and the joke grew from there."

It grew to the point where, when negotiating with Maple Leafs head coach and general manager George "Punch" Imlach, as tightfisted as anybody in the league at the time, "I said I had found my birth certificate after a long search. I was two years younger than I thought, and deserved $1,000 more than he was offering. He said if I showed him the certificate, he would give me the $1,000, not much now, but a lot then. I had to tell the truth, but he gave me the money, anyway."

His Ukrainian family, in which Johnny was the only boy among 7 sisters, was poor. He used a crooked tree branch as a hockey stick, and old mattresses as goalie pads.

"When I was a little guy," he said, "we had nothing at all. But the ambition that I had as a kid was to play hockey as long as I could, because it was always my dream to have my name engraved on the Stanley Cup."

His lying about his age started early -- but for a good caused. At 15, he went to the Canadian Army, told them he was 18, and spent most of World War II stationed in England. He developed rheumatoid arthritis, and was discharged in 1944. He returned home, and signed with the Prince Albert Blackhawks of the Saskatchewan Junior Hockey League.

In 1945, he was signed by the Cleveland Barons, probably the best team in the world outside the NHL. At a time when there were only 6 NHL teams, 120 jobs -- 6 for starting goaltenders and, essentially, 6 more for emergency goalies -- Bower, having dropped his Slavic name for an anglicized one, presumed that this was as good as it was going to get.

But it was pretty good. Jim Hendy, the team's owner, paid his players more than NHL teams were willing to do. Indeed, after the 1954 season, having just won their 8th Calder Cup, their 4th with Bower in the net, they issued a formal challenge to the NHL, saying they wanted to face the Stanley Cup winners, the Detroit Red Wings, for the Cup. After all, the original deed to the Cup said that it was a "challenge trophy."

Whether Bower, Fred Glover, Jack Gordon and the rest could have beaten Gordie Howe, Ted Lindsay, Red Kelly and Terry Sawchuk is academic, since the NHL refused the challenge. Cleveland would briefly have a Barons in the NHL, as the California Golden Seals moved there in 1976, but they failed after 2 seasons, and the city hasn't had an NHL team since. 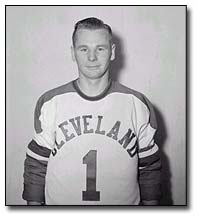 Bower had been American Hockey League Most Valuable Player 3 times, but had briefly played for the New York Rangers in 1954. But he was soon sent back down. Then, in the late 1950s, Leafs owner Stafford Smythe (son of longtime owner Conn Smythe) bought his NHL rights.

"I really had little interest in going to the Leafs," he said. "I had a good situation in Cleveland, and planned to play a couple more years, then retire. But Jim Hendy encouraged me to try the NHL again, and gave me the safety net of returning to Cleveland if it didn't work with the Leafs. Then the Leafs got Punch Imlach, and he convinced me to sign."

Imlach knew he had a gem on his hands, calling him, "the most remarkable, and maybe the best, athlete in the world. It was a time of extraordinary goalies in the NHL: Jacques Plante, Glenn Hall, Terry Sawchuk, Gump Worsley. But if my team had a big game to win, the guy I wanted in goal was Bower. When it really mattered big, he turned into The China Wall."

He earned the nickname because he was short, and, in those less politically correct days, "Chinese" meant "short" or "cheap." (The close left field fence forced by the shape of the Los Angeles Coliseum forced the Dodgers to put up a screen that became known as "the Chinese Wall," and cheap home runs, such as those that went over it, were "Chinese home runs.)

"It was a pretty wonderful time to be a Maple Leaf," Bower said, "a great bunch of guys and players, and there never was a dull moment with Imlach. He loved to keep the pot stirred up."

Imlach liked veterans, having such older players as Bower, George "Chief" Armstrong, Allan Stanley, and Red Kelly, whom he'd brought in from Detroit, where he'd won 4 Stanley Cups. He also had some exciting young players, such as Frank Mahovlich, the high-scoring "Big M," Dave Keon, and Eddie Shack, known as Eddie the Entertainer for his moves on the ice. 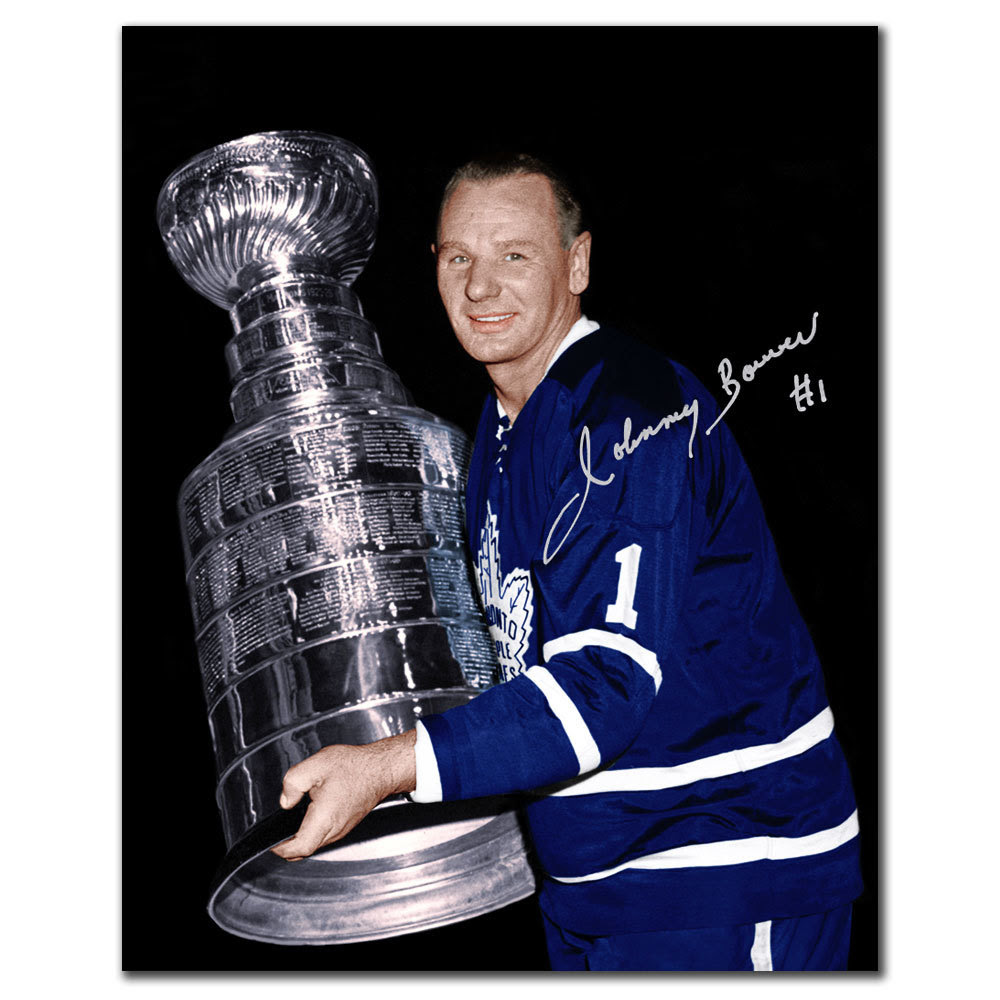 After the Canadiens won 2 more Cups, there would be a showdown between Canada's 2 NHL teams in 1967, the nation's Centennial year. In Game 3 of the Finals, at age 42, Bower became the oldest man ever to start in goal in a Stanley Cup Finals game. (In 1928, Rangers coach Lester Patrick, then 44, had to step in as an emergency goalie in mid-game.) The Leafs won the Cup in 6 games on May 2, 1967. They have not played in a Finals game since.

In 1969, against the Boston Bruins, Bauer broke Patrick's record as the oldest-ever Playoff goalie. On December 10, 1969 -- 8 days before I was born -- the Leafs lost 6-3 to the Canadiens, and Bower, 45 years old, played his last game. He was the oldest NHL player ever, and while Gordie Howe would break that record, Bower remains the oldest goaltender ever. He officially retired on March 19, 1970, with 250 wins and a 2.51 goals-against average. That's 250 wins despite not playing in the NHL until he was 30, and not having his 2nd full NHL season until he was 35.

He was married to a woman named Nancy for 69 years, and had a son, John Jr.; 2 daughters, Cindy and Barbara; 8 grandchildren, and lived to see 6 great-grandchildren. In 2014, Patika Avenue, where the Bowers lived during the Cup years, was renamed Johnny Bower Boulevard. In retirement, he lived in the adjoining city of Mississauga. For a long time, the Leafs had only 2 retired numbers: Bill Barilko's 5 and Ace Bailey's 6, because their careers ended early. The other people whose numbers hung from the rafters at Maple Leaf Gardens, and later the Air Canada Centre, were "Honoured Numbers": The players were honored, but the numbers remained in circulation. Bower and Walter "Turk" Broda, the goalie who helped the Leafs win 4 Cups from 1942 to 1951, were "honoured" with Number 1. In 2016, as part of the team's 100th Anniversary season, all the Honoured Numbers, including the 1 of Broad and Bower, were officially retired.

Today, December 26, 2017, Johnny Bower died after being stricken with pneumonia. He was 93 years old.

Hall of Fame Rangers player and St. Louis Blues general manager Lynn Patrick said it best: "If you don't like Johnny Bower, there's not much hope for you."

UPDATE: Bower was buried at Glen Oaks Memorial Gardens in the Hamilton suburb of Oakville, Ontario.
Posted by Uncle Mike at 10:49 PM