You may never have heard of Jerry Rullo. But, as the National Basketball Association begins its 71st season, he has closed the book on its 1st season.

Generoso Charles Rullo was born on June 23, 1923 in Philadelphia. He attended Temple University, and played basketball there as a 5-foot-10 guard -- not particularly small for the era. He played in the 1942-43 and 1943-44 seasons, before serving in the U.S. Army in World War II, and then played a senior year in 1945-46. He captained the Owls' basketball and soccer teams, and also played baseball.

He was taken as a territorial pick by the Philadelphia Warriors in the 1st draft of the NBA, then known as the Basketball Association of America, in 1946. He only played in the BAA's/NBA's 1st 3 seasons: 1946-47, 1947-48, 1948-49. Indeed, were it not for the distinction that he would one day have, his career would not be particularly remarkable.

But the Warriors did win the 1st BAA title, beating the New York Knicks 2 games to none in the Eastern Division Finals, and then beating the Chicago Stags 4 games to 2 in the Finals, clinching on April 22, 1947, at home at the Philadelphia Arena, at 4530 Market Street in West Philly. 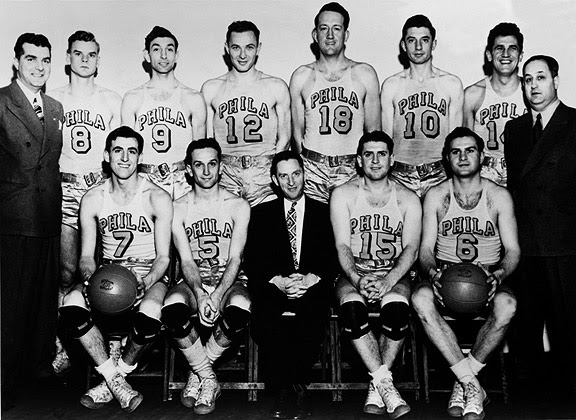 Hail the 1st NBA Champions. Here's who they were, and what happened to them:

* Isadore "Eddie" Gottlieb. Born in 1898 in Kiev, Ukraine. Founder of the basketball team at the South Philadelphia Hebrew Association, known as "The Philadelphia SPHAs." The current team known as the Golden State Warriors is directly descended from the SPHAs. Led them to American Basketball League titles in 1934, 1936, 1937, 1940, 1941, 1943 and 1945.

He founded the Warriors, and coached them from 1946 to 1955, owning them outright from 1952 until 1962, when he sold them to a group that moved them to San Francisco. Probably more responsible for the NBA's rules than any other person. Hall of Fame. The NBA's Rookie of the Year award is named for him. Died in 1979.

* Number 9, guard Ralph Kaplowitz. Born in 1919 in The Bronx. Played at DeWitt Clinton High School and NYU, where he was a teammate of Fleishman. Was an original Knick at the start of the 1946-47 season, but traded to the Warriors in mid-season. Played 1 more season for Warriors. Died in 2009.

* Number 10, forward Joe Fulks. Born in 1921 in Birmingham, Kentucky. "Jumpin' Joe" played at Murray State University in his home State, where his Number 26 was retired. He was the BAA's/NBA's 1st scoring champion, 23.2 points per game.

* Number 12, forward Howie Dallmar. Born in 1922 in San Francisco. Led Stanford to the 1942 National Championship, and was named the NCAA Tournament's Most Outstanding Player. Warriors 1946-49. Head coach at the University of Pennsylvania, later at Stanford. Died in 1991. Should be in the Hall of Fame.

* Number 14, guard Matt Guokas. Born in 1915 in Philadelphia. (I should have done a posthumous 100th Birthday tribute to him.) Played at St. Joe's, but before Senesky. Only played that 1st season with the Warriors, because he lost a leg in a car accident. Broadcast for the Philadelphia Eagles from 1953 to 1985. Died in 1993.

His son, Matt Guokas Jr., won an NBA title with the Philadelphia 76ers, making them the 1st father/son duo to both win NBA titles. (They have been joined by Rick and Brent Barry, Bill and Luke Walton, and Mychal and Klay Thompson.) Matt Jr. also became a broadcaster.

If you've been paying attention, you've noticed that the only one who doesn't have a date of death listed there is Jerry Rullo. That's because he was the last survivor.

After leaving the Warriors, he played for minor league teams, the Trenton Tigers in 1949-50 and the Sunbury Mercuries in 1950-51. He then went to work for the Philadelphia Department of Recreation from 1950 until retiring in 1983. The following year, he was elected to the Temple University Athletics Hall of Fame. He married Eileen Rafferty, and had 2 sons, Jerry Jr. and James, who gave him 6 grandchildren.

Jerry Rullo, the last survivor of the 1st NBA Champions, died last Friday, October 21, 2016. He was 93 years old. With his death, the 1st chapter of NBA history is officially closed.

UPDATE: Jerry was buried at Holy Cross Cemetery in the Philadelphia suburb of Yeadon, Pennsylvania.

Now, the earliest surviving player from an NBA Championship team is Carl Meinhold, 90 years old, also from the Philadelphia area, an LIU graduate, who played on the 1948 NBA Champion Baltimore Bullets.

Here are the other surviving NBA Champions, through the end of the 1950s:

From the 1949 Minneapolis Lakers: Arnie Ferrin and Donnie Forman are still alive.

From the 1950 Lakers: Ferrin, Bob Harrison and Bud Grant -- yes, the same Bud Grant who would later coach the Minnesota Vikings.

From the 1951 Rochester Royals: Frank Saul and Bill Calhoun.

From the 1953 Lakers: Harrison, Saul, Skoog and Dick Schnittker.

From the 1954 Lakers: Saul, Skoog and Schnittker.

From the 1955 Syracuse Nationals: Billy Gabor (no relation to Zsa Zsa, Eva and Magda), Jim Tucker and Bill Kenville.

And from the 1959 Celtics: Russell, Cousy, Heinsohn, Ramsey, Sam Jones, K.C. Jones, and Gene Conley -- the only man to win a World Series and an NBA Championship, and also 1 of 12 surviving players from the Milwaukee Braves team that won the 1957 World Series.

Kenny Sailors, star of the University of Wyoming team that won the 1943 NCAA Championship, was the last survivor of it, dying this past January 30. He played in the NBA from 1946 to 1951, its 1st 5 seasons. In the 1st season, 1946-47, he played for both teams that reached the Finals, but was traded away by both of them before the Finals.

The aforementioned Arnie Ferrin played on the 1944 National Champions, the University of Utah. Wataru Misaka is also still alive from that team. A native of Ogden, Utah, he served in the U.S. Army in the postwar occupation of Japan, and played 3 games for the Knicks in the 1947-48 season, making him the 1st nonwhite and the 1st Asian player in the league that became the NBA. One more player from that '44 Utes team survives, Herb Wilkinson.

George Kaftan and Bob Cousy still survive from the 1947 National Champions, of the Worcester, Massachusetts-based College of the Holy Cross.

There is now just 1 surviving player from the 1948 U.S. Olympic basketball team. Jackie Robinson. No, not that one. This one is Robert Jackson Robinson, about to turn 89, from Fort Worth, Texas, a guard at Baylor University. He never played pro ball, instead going into the ministry, and has retired to Augusta, Georgia.

That 1948 team was made up largely of that year's National Champions, the University of Kentucky Wildcats. Dale Barnstable and Walter Hirsch are now the last survivors of that squad.

Al Roth is the last surviving player of the City College of New York (CCNY) team that became the only team ever to win the NCAA and the NIT in the same year, 1950. Competing in both tournaments is no longer allowed, nor desirable.

There are now 2 surviving players from the 1952 National Champion Kansas Jayhawks: Bill Hougland, a guard who never played beyond semi-pro ball, but won another Gold Medal at the 1956 Olympics in Melbourne, Australia; and forward Bill Lienhard, who enlisted in the U.S. Air Force and never played any kind of pro ball.

Days until East Brunswick High School plays football again: 3, home to Freehold Township, in a GMC/Shore Conference crossover. This past Friday, they lost to Edison. They are 2-4, and will have to win all their games to finish above .500. Ha, ha.


Days until The Arsenal play again: 4, on Saturday morning, at 7:30 AM U.S. Eastern Time, way to North-East club Sunderland. Today, Arsenal beat Berkshire club Reading to advance to the Quarterfinal of the League Cup, the least important of the 4 competitions they're in (the UEFA Champions League, the Premier League, and the FA Cup).

Days until Rutgers University plays football again: 10, on Saturday, November 5, home to Indiana University. They could use a week off, after getting pasted 58-0 by Ohio State and 78-0 at home by Michigan, and then losing 34-32 to Minnesota on a last-play field goal. Who is the mental acrobat who thought getting Rutgers into the Big Ten was a good idea?

Days until the 2016 Presidential election: 14, on Tuesday, November 8. That's exactly 2 weeks. Make sure you vote!

Days until the U.S. national soccer team plays again: 17, on Friday, November 11, home to arch-rival Mexico at Mapfre Stadium in Columbus, Ohio, in a CONCACAF Qualifying Match for the 2018 World Cup. This match will be followed 4 days later by another Qualifier, away to Costa Rica.

Days until the New York Red Bulls play again: 28, on Tuesday night, November 22, in the 1st Leg of the MLS Cup Eastern Conference Semifinal, probably away, to either D.C. United in Washington or the Montreal Impact.


Days until the Red Bulls next play a "derby": Unknown. New York City FC, the Philadelphia Union and D.C. United all made the MLS Cup Playoffs. The New England Revolution did not. If D.C. beats Montreal, then the Red Bulls will play them. If Philly beats Toronto, they will advance to play NYCFC, and the winner of that match will play the winner of the RBNY-DC-Montreal bracket. So it is likely that Metro will face at least one "derby" team.

Days until the next East Brunswick-Old Bridge Thanksgiving game: 30, on Thursday morning, November 24, at the purple shit pit on Route 9. Exactly 1 month.

Days until the New Jersey Devils play another local rival: 47. Their 1st game this season with the New York Rangers will be on Sunday night, December 11, at Madison Square Garden. Their 1st game this season with the Philadelphia Flyers will be on Thursday night, December 22, at the Prudential Center. By a quirk in the schedule, the New York Islanders, a team they usually play several times a season, don't show up on the slate until Saturday night, February 18, 2017, at the Prudential Center.

Days until the next World Cup kicks off in Russia: 597, on June 14, 2018. Under 20 months. The U.S. team will probably qualify for it, but with Jurgen Klinsmann as manager, particularly in competitive matches such as World Cup Qualifiers, rather than in friendlies, you never know.

Days until the Baseball Hall of Fame vote is announced, electing Mariano Rivera: 805, on January 9, 2019. A little over 2 years, a little over 26 months.