You know a year is taking too many great and/or inspiring people when it takes the Captain of the greatest team ever assembled in the history of a sport.

Football: Whether you think it was the 1966 Green Bay Packers, the 1979 Pittsburgh Steelers or the 1989 San Francisco 49ers, none of those teams had an official Captain. You could say, unofficially, it was, respectively, Bart Starr, Mean Joe Greene and Joe Montana, all of whom are still alive.

Basketball: The 1992 U.S. Olympic Team didn't have an official Captain. Unofficially, it was Magic Johnson. Despite being HIV-positive then, he is still alive.

Carlos Alberto Torres was born on July 17, 1944 in the city of Rio de Janeiro, in the state of Rio de Janeiro, Brazil. In 1963, he joined local club Fluminense, the original big club of Brazil. At the time, it was rare, anywhere in the world, for a right back to be known for attacking skills. But Carlos Alberto (Brazilian players are traditionally known by nicknames, and, in his case, he simply dropped his last name) was noted for his ball control, dribbling and playmaking ability. In 1964, he and "La Flu" won the Campeonato Carioca, the state championship of Rio de Janeiro.

Carlos Alberto was selected for the Brazil national team, a.k.a. the Seleção (Selection) that won the Gold Medal at the 1963 Pan American Games and the Taça das Nações (Nations' Cup), a 1964 tournament held in honor of the 50th Anniversary of the founding of the Brazilian Football Confederation. But he was not selected for the 1966 World Cup -- the only one from 1954 to 1974 that Brazil did not win. Whether that was due to his absence or Argentina literally kicking Pelé out of the tournament is open to debate.

When the 1970 World Cup convened in Mexico, Brazil was a nation in trouble, dominated by a military dictatorship. Thus it was ironic that they put together the most creative soccer team ever assembled:

Manager: Mário Jorge Lobo Zagallo. Once a left winger, he had starred for Flamengo and Botafogo, and played with Pelé and earlier legends Garrincha, Hilderaldo Bellini, Gilmar, Djalma Santos, Didi, Nílton Santos and Vavá on Brazil's 1958 and 1962 World Cup winners.

The World Cup had been broadcast on television since 1954, but 1970 was the 1st time it had been broadcast around the world in color. Brazil's yellow shirts with green trim and numbers, and blue shorts, really stood out, especially since England, despite wearing red shirts when they won the 1966 Final, usually wore white shirts. So did West Germany, who lost the '66 Final, and would turn out to be the only team in the '70 edition besides Brazil to make it through the Group Stage with wins in all 3 games. Italy's blue shirts also stood out.

Brazil played all their games in Guadalajara until the Final. In the Group Stage, they came from 1-0 down to beat Czechoslovakia 4-1, on goals by Rivelino, Pelé, and 2 by Jairzinho; beat England 1-0 on Jairzinho's 59th minute goal, despite Gordon Banks coming up with one of the all-time great saves to deny Pelé (the famous photo of Pelé and England Captain Bobby Moore exchanging shirts was taken after this game); and beat Romania 3-2 on 2 goals by Pelé and 1 by Jairzinho. 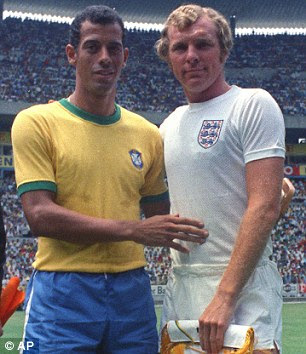 A less famous photo of the Captains, before the game:
Carlos Alberto and Bobby Moore

They beat Peru in the Quarterfinal, on 2 goals by Tostão and 1 each by Rivellino and Jairzinho. They fell behind Uruguay 1-0 in the Semifinal, but a goal each by Clodoaldo, Jairzinho and Rivellino put a stop to that, putting them in the Final at 3-1. That set up a match with Italy, who had beaten West Germany 4-3 in an extra-time thriller that was called "The Game of the Century."

Italy was loaded as well, with talents such as Tarcisio Burgnich, Giacinto Facchetti, Roberto Boninsegna and Luigi "Gigi" Riva. However, manager Ferruccio Valcareggi made what could have been a decisive mistake: He never found a way to make AC Milan superstar Gianni Rivera and Internazionale Milano legend Sandro Mazzola play together. As a result, he started Mazzola, and only brought Rivera on as a substitute.

In the 18th minute, Rivelino sent in a cross that Pelé headed in. But Brazil's defense faltered in the 37th, and Boninsegna scored an equalizer for Italy. In the 2nd half, Italy's famed catenaccio (meaning "padlock") defense was worn down by Brazil's creativity. In the 66th, Gérson fired a rocket past Enrico Albertosi to give the Seleção a lead they would never relinquish. In the 71st, Gérson sent a long free kick to Pelé, who headed down into the path of the onrushing Jairzinho.

The win was capped in the 86th, with one of the greatest goals ever scored. Tostão was just to the left of Brazil's 18-yard box, with his back to the goal, then passed to Brito, and the ball went in turn to Clodoaldo, Pelé, Gérson, Clodoaldo again, Rivelino on the wing, to Jairzinho, a cross to Pelé, and finally to Carlos Alberto, who knocked it in. Here, he describes it himself, in English.

Brazil had the game won, 4-1. Carlos Alberto accepted the Jules Rimet Trophy as Captain of the World Champions. Zagallo thus became the 1st man to both play for and manage a World Cup winner. Franz Beckenbauer of Germany would be the 2nd. As yet, there has not been a 3rd.

Carlos Alberto continued to play for Santos until 1974, then returned to Fluminense, winning the Campeonato Carioca again in 1975 and 1976. In 1977, he was reunited with Pelé on the New York Cosmos, a team that played at Giants Stadium in the New Jersey Meadowlands. That team also had Beckenbauer, Italian striker Giorgio Chinaglia, and former Santos player Nelsi Morais. They won the North American Soccer League championship, the Soccer Bowl, in 1977.

Pelé retired, but Carlos, wearing Number 25 instead of his usual 4 (Cosmos Captain Werner Roth wouldn't give it up), later switching to 5, remained with them, to win the Soccer Bowl again in 1978, reach it but lose in 1979, win it in 1980. He played for the Anaheim-based California Surf in 1981, and the Cosmos only reached the Semifinal in 1981. He went back to the Cosmos in 1982, and they won it all again.

Carlos and Giorgio with the league title trophy

He then retired, and managed many teams, including Brazilian giants Flamengo, Corinthians, Botafogo, Fluminense and Atlético Mineiro, and the national teams of Oman and Azerbaijan, last doing so in 2005. 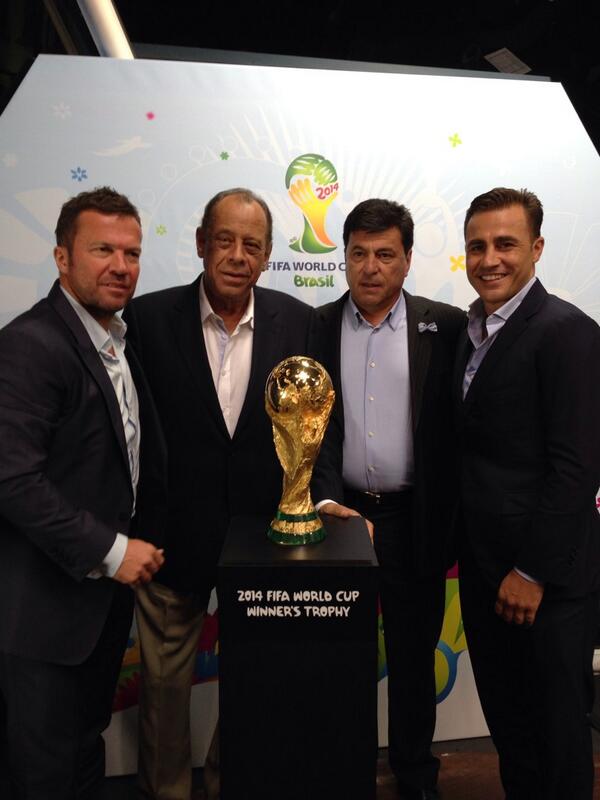 He became a commentator for Brazilian network SporTV, and made appearances on behalf of the reborn Cosmos franchise of the new NASL. He was on SporTV just 2 days before his death this morning, of a heart attack. He was 72.