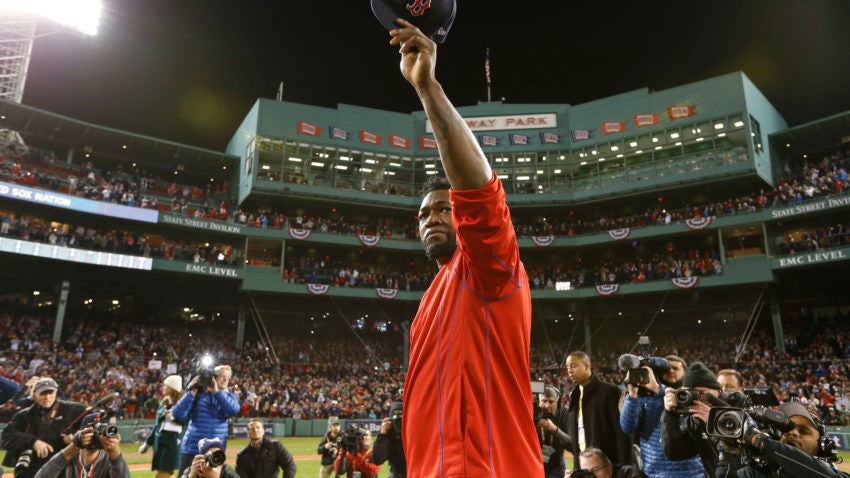 The advanced to the American League Championship Series, where they will face the Toronto Blue Jays, who knocked out the Texas Rangers.

The San Francisco Giants stayed alive in their National League Division Series by beating the Chicago Cubs in 13 innings.

The other NLDS, between the Washington Nationals and the Los Angeles Dodgers, goes to a deciding Game 5 today. No Washington team has won a postseason series since 1924 -- 92 years. The Nationals franchise hasn't won one since 1981 -- 35 years, since they were the Montreal Expos, and, even then, they needed the split-season setup due to the strike.

But the Red Sox are done for the season. And that means that David Ortiz has played his last game.

As Bill Clinton would say, The era of Big Papi is over.

Or, as Ortiz would say, "I did not have chemical relations with that steroid."

Never again will Ortiz play in a game that counts, against the Yankees or anyone else.

And stay out! You big fat lying cheating bastard!

Of the 4 National League teams left, I could handle any of them winning, except the Dodgers. Never forget the Treason of '57.

As for the American League teams, Cleveland is an easy choice over Toronto. And with the Cavaliers having won the NBA title, the city's 1st title in any sport in 52 years, maybe this really is Cleveland's year.

Then again, the Browns...

Days until the New Jersey Devils play another regular season game: 2, this Thursday night, away to the Florida Panthers in the Miami suburb of Sunrise. Under 5 weeks. The home opener is 5 days later, on Tuesday night, October 18, against the Anaheim Ducks.

Days until East Brunswick High School plays football again: 3, home to South Brunswick. This past Saturday, they lost a rainy away game in overtime to Shore Conference team Marlboro. They are 2-3.

Days until The Arsenal play again: 4, on Saturday morning, at 10:00 AM U.S. Eastern Time, home to Welsh club Swansea City.


Days until Rutgers University plays football again: 4, Saturday at 12:00 noon, home to the University of Illinois. In their last 2 games, they have lost 58-0 away to Ohio State and 78-0 at home to Michigan. Who is the mental acrobat who thought getting Rutgers into the Big Ten was a good idea?

Days until the Red Bulls next play a "derby": Unknown. There are no further games this regular season against NYCFC, Philly, or D.C. United, although it is likely that all will make the MLS Cup Playoffs, so it is likely that Metro will face at least one of them.

Days until the 2016 Presidential election: 28, on Tuesday, November 8. That's exactly 4 weeks. Under a month. Make sure you are registered to vote, and then make sure you vote!

Days until the U.S. national soccer team plays again: 31, on Friday, November 11, home to arch-rival Mexico at Mapfre Stadium in Columbus, Ohio, in a CONCACAF Qualifying Match for the 2018 World Cup. This match will be followed 4 days later by another Qualifier, away to Costa Rica. This past Friday, in their 1st match against Cuba since 1947, they won 2-0 in Havana.

Days until the next East Brunswick-Old Bridge Thanksgiving game: 44, on Thursday morning, November 24, at the purple shit pit on Route 9. A little over 6 weeks.

Days until the New Jersey Devils play another local rival: 61. Their 1st game this season with the New York Rangers will be on Sunday night, December 11, at Madison Square Garden. Their 1st game this season with the Philadelphia Flyers will be on Thursday night, December 22, at the Prudential Center. By a quirk in the schedule, the New York Islanders, a team they usually play several times a season, don't show up on the slate until Saturday night, February 18, 2017, at the Prudential Center.

Days until the next World Cup kicks off in Russia: 611, on June 14, 2018. About 20 months. The U.S. team will probably qualify for it, but with Jurgen Klinsmann as manager, particularly in competitive matches such as World Cup Qualifiers, rather than in friendlies, you never know.

Days until the Baseball Hall of Fame vote is announced, electing Mariano Rivera: 819, on January 9, 2019. A little over 2 years, a little under 7 months.