My Take On the Utley-Tejada Play 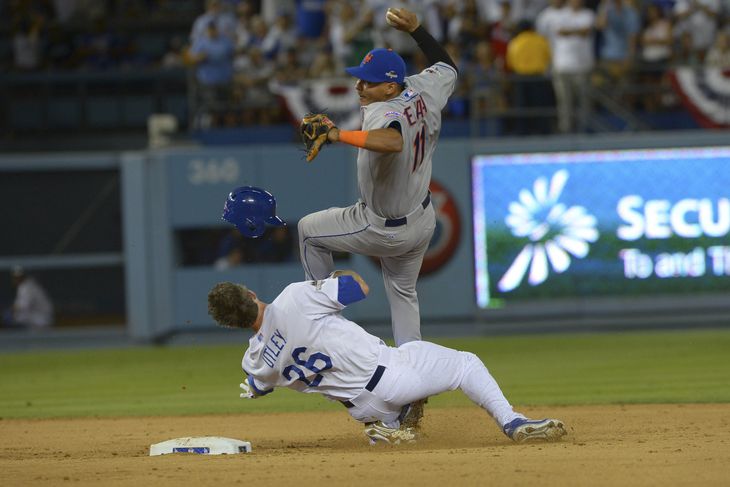 As my readers know, I hate the Mets, because I have taste. Being a Yankee Fan is merely secondary.

As my readers may not know, as the subject hasn't come up very often, but they're about to find out, I hate the Dodgers, because my grandmother was a Brooklyn fan.

I hate both teams, so I can be completely objective. Here's my take on that play:

Therefore, under most circumstances, Chase Utley would, officially, be safe. If that were the extent of what happened, then the call that stood last night (Utley was awarded 2nd base) would have been the correct call.

Except Utley ran outside the baseline. That should mean he is out.

The question then becomes whether Ruben Tejada would have completed the play if Utley hadn't left the baseline and, intentionally or otherwise, broken his leg. If there's interference, then the batter, Howie Kendrick, should also have been declared out.

But if the umpire, at his discretion, didn't think Tejada would have gotten the ball to 1st baseman Lucas Duda in time, then Kendrick should've been ruled safe at 1st.

Therefore, the following call would be correct: Utley out at 2nd, and thrown out of the game for a dirty play; Kendrick safe at 1st.

Whether the Dodgers would have won the game anyway if that had been the call, I don't know. But, knowing the Mets' bullpen, they could well have won it.

1. Whether Matt Harvey actually is worthy of the title "ace," or if the Flushing Heathen are, as usual, full of crap. And...

2. Which is stronger: The Curse of Kevin Mitchell (The Mets will never win a World Series), or the Curse of Donnie Baseball (No team with Don Mattingly in uniform has ever won a Pennant, and none ever will).

In California, the threat of "The Big One" striking was there. But I don't want any innocent people to die.

However, and in Men In Black we already saw an alien ship over the old Flushing Toilet, we do have the possibility of aliens coming and beaming up the entire stadium, taking both sets of teams and fans with them.

I'm rooting for that.

Last night, the Devils lost to the Washington Capitals, Rutgers blew a 2nd half lead against Number 4 Michigan State, and the U.S. soccer team blew it in extra time against arch-rival Mexico.

I was not happy.

And then this play happened, and #MetsTwitter went into absolute meltdown.

And, Met fans, if you think your team is going to get revenge on Utley, either through themselves or through those of you who get into Pity Field these next 2 games, let me remind you of 2 things:

1. In 2002, Shawn Estes threw at Roger Clemens, to retaliate for Clemens throwing his bat across the path of Mike Piazza (only a blind man or a liar would say he threw the bat at Piazza) in the 2000 World Series -- an event for which Estes wasn't even in the stadium. And Estes missed. And Clemens then hit an RBI double off him. (The Mets did win the game, though.)

2. In 1973, Pete Rose took out Bud Harrelson with a similar slide in Game 3 of the NLCS, then started a fight with Harrelson, weighing about 40 pounds less. When Rose went out to left field to start the next inning, Met fans threw garbage at him.

The umpires told the public address announcer to tell them to stop, or the game would be forfeited to the Reds -- a potential Pennant-losing action by Met fans, 30 years before the Steve Bartman mistake at Wrigley Field, and this would have been no mistake.

Still, they wouldn't stop throwing things at Rose, until Yogi Berra, Willie Mays and Tom Seaver, 3 of the greatest legends of New York baseball (and only Seaver was truly a Met legend), told them to knock it off, which they did.

The best revenge is winning the game. As Herman Edwards taught us, "This is what the great thing about sports is: You play to win the game!"

That's what Utley did last night, except he didn't stay within the rules.

If the Mets want to win this series, they will stay within the rules, and do their best to win fair and square. As the old saying goes, "Living well is the best revenge."

I do have to hand it to Utley for one thing, though. He did something I didn't think was possible.

He made Philadelphians happy that a Los Angeles sports team won a big game.
Posted by Uncle Mike at 11:01 AM