And another awkward goodbye for sports in this area: The revised, post-lockout NBA schedule has been released. The Knicks open at Madison Square Garden on December 25 -- you may know it as "Christmas Day" -- at noon against the Boston Celtics. These are, of course, the only two remaining 1946 charter members of the NBA still playing in their original cities.

* 5:00, the two most successful franchises of the last 25 years, the Chicago Bulls at the Los Angeles Lakers.

* 8:00, two of the up-and-coming teams of the league, the Orlando Magic at the Oklahoma City Thunder.

* 10:30, the Los Angeles Clippers at the Golden State Warriors in Oakland -- two teams that could have been arch-rivals, but instead are notorious underachievers.

The last Nets home opener in New Jersey will be the next day, December 27, against the Atlanta Hawks at the Prudential Center.

The Nets' New Jersey finale -- barring the Playoffs, but who's kidding who -- will be on Monday night, April 23, at the Prudential Center. Somewhat appropriately, it will be against the team to whom the New York Nets had to sell Julius Erving just to get into the NBA in 1976, the Philadelphia 76ers. Instantly, they went from being the best team in the ABA to being the worst team in the NBA, moved to the Rutgers Athletic Center in 1977, changing their name to the New Jersey Nets, to the Meadowlands in 1981, and to the Prudential a year ago.

The last day of the NBA regular season will be Thursday, April 26, and the Nets will play their last game as the New Jersey Nets at the Air Canada Centre against the Toronto Raptors. Come November 2012, it will be home games at the Barclays Center in Brooklyn, as the Brooklyn Nets.

Sócrates is dead. No, not the ancient Greek philosopher. Well, yeah, him, too, but he's been dead for 2,410 years. I mean the Brazilian soccer legend.

Sócrates Brasileiro Sampaio de Souza Vieira de Oliveira was born on February 19, 1954 in Belém, in the State of Pará, in northern Brazil, far from the huge cities of the country's south, Rio de Janeiro and São Paulo. He began playing professionally as a midfielder for Botagfogo-SP Ribeirão Preto in the State of São Paulo -- not to be confused with Botafogo de Futebol e Regatas (football and rowing), of Rio, one of the most-supported clubs in the world.

In 1978, he signed São Paulo club Corinthians, and he became a legend. He led them to the São Paulo State Championship in 1979, 1982 and 1983. In the 1982 World Cup in Spain, wearing the Number 8, he was the biggest star on a Brazil team that thrilled the world with its stylish play, much as the 1970 Brazil team led by Pelé did. Sócrates was their main playmaker, a two-footed shooter known for his white headband, and for making blind heel passes to teammates like Zico, Éder Assis and Roberto Dinamite.

As the man himself said, in words that would be agreed upon by Dutch visionary Johan Cruijff and Arsenal manager Arsène Wenger, "Beauty comes first. Victory is second. What matters is joy."

However, this was the era of the World Cup being decided by 2 group stages, and, despite a goal by Sócrates, Italy knocked them out thanks to a hat trick by Juventus star Paolo Rossi -- who titled his memoir I Made Brazil Cry. That Brazil team is often called the best team not to make a World Cup Final.

Sócrates also played for Brazil in the 1986 World Cup in Mexico (now wearing Number 18 and, like Chicago Bears quarterback Jim McMahon at the same time, making his white headband iconic), but they lost to France on penalties in the Quarterfinal.

The Italians must have seen something in Sócrates, because in 1984, he was signed by Florence-based Fiorentina. But he may have gotten homesick, because he returned to Brazil after just 1 season, playing for Rio's Flamengo (winning the Rio State Championship in 1986) and São Paulo's Santos (Pelé's old club), before concluding his career in 1989 with the club with whom he started, Botafogo-SP.

He later managed them, and also Ecuador's leading club, LDU Quito, and Rio club Cabofriense. In 2004, at 50, he made a 1-game (12-minute, as it turned out) comeback with Yorkshire side Garforth Town.

His father was a prominent civil servant, and so, unlike most Brazilian boys of his generation, Sócrates was able to go to college. He went to medical school, and became a practicing physician, and was known in the public imagination as Doctor Sócrates.

I know: It sounds like the name of a comic-book supervillain. But he was a hero. When the Brazilian military coup happened in 1964, he was 10 years old, and saw his father get rid of the thing he valued the most: His large book collection.

Knowing that wasn't right, Sócrates spent much of his soccer career also engaging in political agitation, founding the Corinthians Democracy movement (possibly in tribute to the ancient Greeks, inventors of democracy and originators of the names both he and his club bore). On March 15, 1985, an elected government took office, and Sócrates and the others who opposed the military dictatorship were vindicated.

Soccer writer Adrian North compared him to one of his political heroes, Argentine revolutionary Ernesto "Che" Guevara, who was no hero: "Che believed to change the world, he needed a voice and a gun. Socrates believed he could change his country by amplifying his voice through football." 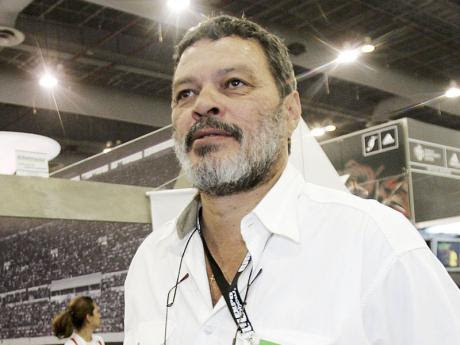 "I smoke. I drink. I think."
Ernest Hemingway would have loved him.
So would Jack Kerouac, until the subject turned to politics.

Ironically, this brilliant man who was also a physician smoked, and it led to a few ailments that combined to lead to his death 3 days ago. He was only 57, and left behind a wife and 6 children.

Dilma Rousseff, President of Brazil: "On the field, with his talent and sophisticated touches, he was a genius. Off the field... he was active politically, concerned with his people and his country."

Ronaldo (the bald Brazilian, not the gel-haired Portuguese): "Sad start to the day. Rest in peace Dr. Socrates."

Paolo Rossi: "His death is piece of our history that's broken off and gone away."

We call our sports stars "heroes." Doctor Sócrates really was a hero, for his country and for the world, for his time and for all time.
Posted by Uncle Mike at 10:09 AM