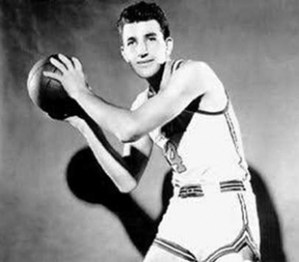 But the days when New York colleges other than St. John's produced basketball legends are long gone, a victim of the early 1950s point-shaving scandals that relegated New York University (NYU), City College of New York (CCNY) and downtown Brooklyn-based Long Island University (LIU) to 2nd-class status, thus helping to pave the way for the success of the nascent NBA.

And one of the last of the players who made those schools matter has left us.

Adolph Schayes (no middle name) was born on May 19, 1928 in The Bronx. A son of Romanian Jewish immigrants, he grew up in the University Heights section of The Bronx, on Davidson Avenue off 183rd Street, and attended the prestigious DeWitt Clinton High School.

Too young to have served in World War II, he attended NYU and played basketball there, when playing there really meant something. He was a classic gym rat: NYU's coach, Howard Cann, said, "He was in the gym practicing, every spare minute. We had to chase him out."

The hard work paid off: In 1945, NYU reached the NCAA Final, losing to Oklahoma A&M, coached by Hank Iba and led by Bob "Foothills" Kurland, the 1st 7-footer to be more than just a roadblock. (The school won the title again the next year, and became Oklahoma State in 1958.)

In 1948, the 2 leagues that would merge a year later to form the NBA battled over his services. His hometown New York Knicks of the Basketball Association of America drafted him, and so did the Tri-Cities Blackhawks of the National Basketball League. (They played their games in Moline, Illinois, representing the region that usually gets called the Quad Cities today, also including Rock Island, Illinois and Davenport and Bettendorf, Iowa.) The Blackhawks traded his rights to the Syracuse Nationals, who offered him $7,500, twice what the Knicks did, and so Dolph left home.

In his rookie season, he broke his right arm. He played anyway, with a cast, and learned to shoot with his left hand, making him an even deadlier shooter, right up there with Bill Sharman of the Boston Celtics as the best shooter of the 1950s. He led the league in rebounding in 1951, making the 1st of what turned out to be 12 NBA All-Star Teams.

In 1954, the Nationals (like today's Washington Nationals baseball team, known as the Nats for short) reached the NBA Finals, losing to the Minneapolis Lakers of George Mikan. Then the 24-second shot clock was established -- an innovation thought up by the Nats' owner, Danny Biasone. The Lakers could not adapt. The Nats did, and defeated the Fort Wayne Pistons to win the 1955 NBA Championship.

In 1957, Schayes hit 18 consecutive free throws in a game, then a record. In that year that began the space race, his high arcing shots earned him the nickname "Sputnik."

As the NBA grew, its smaller cities, as happened to the NFL by the time the 1920s ended, fell by the wayside. Tri-Cities Blackhawks moved to Milwaukee in 1951, becoming the Hawks; then to St. Louis in 1955, then to Atlanta in 1968. The Fort Wayne Pistons moved to Detroit in 1957. The same year, the Rochester Royals moved to Cincinnati, later to Kansas City where they became the Kings, and then to Sacramento. And in 1963, the other Western New York team, the Syracuse Nationals, moved to take the place of the Philadelphia Warriors, who had moved to San Francisco. The Nats became the Philadelphia 76ers.

Their 1st coach in Philly was Dolph Schayes, who retired as a player at the end of that 1st season, 1963-64. He was named NBA Coach of the Year in 1966, but stepped aside when he was offered the job of the NBA's supervisor of referees. Can you imagine that happening today, in any sport: A former player being named supervisor of game officials? There's a laugh.

In 1970, Schayes returned to Western New York, as the 1st coach of the expansion Buffalo Braves. But he left at the start of the next season. The team is now known as the Los Angeles Clippers.

His home still in Syracuse, he became a real estate developer there. He was also heavily involved in the Maccabiah Games, effectively the Jewish Olympics, held in Israel. In 1977, he coached the U.S. team to the gold medal there.

That team included his son Danny Schayes, who played at Syracuse University, and for 18 years in the NBA, his best years for the Denver Nuggets of the 1980s. Danny's wife is Wendy Lucero, a former Olympic diver. He now runs an investment firm in Phoenix.

He and his wife Naomi had another son, David; daughters Carrie Goettsch and Debra Ferri; and 9 grandchildren. Dolph Schayes died of cancer in Syracuse yesterday. He was 87 years old, and one of the grand old men of American sports.

Oddly, especially considering how the NBA tends to treat its venues as disposable, the Nats' arena still stands. Opened in 1951 as the Onondaga County War Memorial Arena, it is now known as the Oncenter, and is home to a minor-league hockey team, the Syracuse Crunch.
Posted by Uncle Mike at 1:33 AM